The range contains nine peaks that rise above 12,000 feet, and have 300+ feet of prominence, the tallest being Mount Peale at 12,721 feet. The La Sal Mountains are a cool retreat from the desert heat and contain aspen and pine forest, as well as alpine tundra and even a few small “permanent” snowfields (permanent is in quotations because the recent drought may have melted some of the snowfields previously known as “permanent”).

The La Sal means "The Salt" in Spanish and the mountains were named by the Dominguez/Escalante Expedition in 1776. There are two stories about the naming of the La Sals. The first is that they were named because the soils and valleys surrounding the mountains contain salt. The second is that since the Dominguez/Escalante party passed through the area in August, they just couldn't believe the mountains were covered with snow, so they assumed they were covered with salt as are some of the surrounding valleys. Since summer temperatures often soar to 110F or higher in the valleys, the story isn't as far-fetched as it may seem.

In addition to the sub-alpine and alpine mountains, the La Sal Mountains contain many desert peaks and towers, around the outer edges. Some of the more famous are Castle Rock/Castleton Tower, Fisher Towers, Onion Creek Towers, the Priest, Adobe Mesa, and The Palisade. 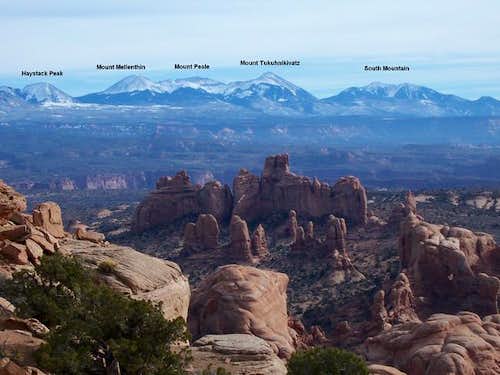 Hiking ranges from alpine scrambles, to sub-alpine trails, to desert canyons. The high mountain trails and lakes are a good way to leave the searing heat of the desert present at lower elevations. No trails exist to the summits of the highest peaks, but all the highest peaks are class 2+ to 3 in difficulty, at least by their easiest routes. Many of the routes to the highest peaks require and ice axe in to July in most years. 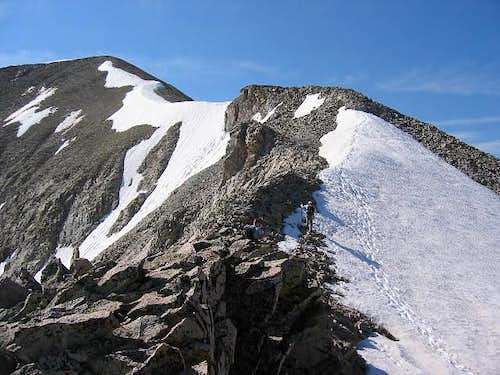 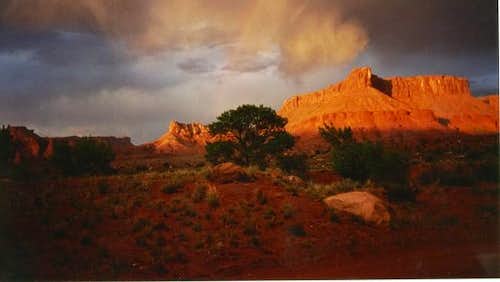 In addition to climbing the peaks, there are also many canyons to hike in the foothills of the La Sals. Some of the more famous canyons in the area are Mill Creek, Negro Bill Canyon, and Professor Creek. Though in the desert, they are laced with waterfalls and pools and are thus popular in the summer. There are various other lesser known canyons. I made an album on one for Thompson Canyon, which also contains a map of the canyon access route. 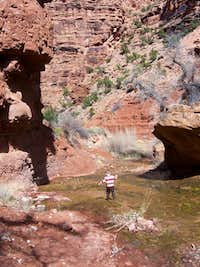 The technical climbing is somewhat of an anomaly. While the higher peaks are all made of granite, none of the granite seems good for technical climbing. Those few faces that are vertical enough to climb are too crumbly and shattered, quite unusual for a mountain range made mostly of granite.

The lower fringes of the range, and on the sandstone walls and towers is where all the technical climbing is done. Climbs up such towers as Castleton, The Priest, and the Titan rank among the most famous climbs in the world. 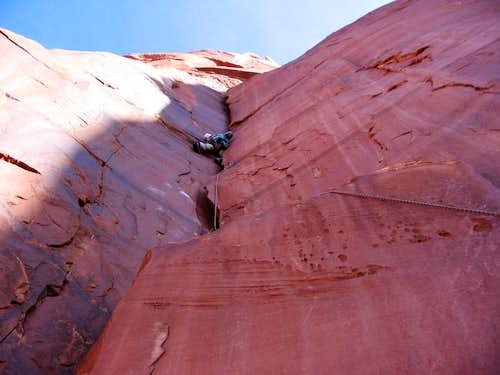 Honeymoon Chimney on The Priest

The definition of technical canyon varies from group to group and person to person, but basically, these are canyons that require rock climbing skills to ascend or descend. The line gets fuzzy when describing a technical canyon when it just requires rappelling and not any other rock skills. 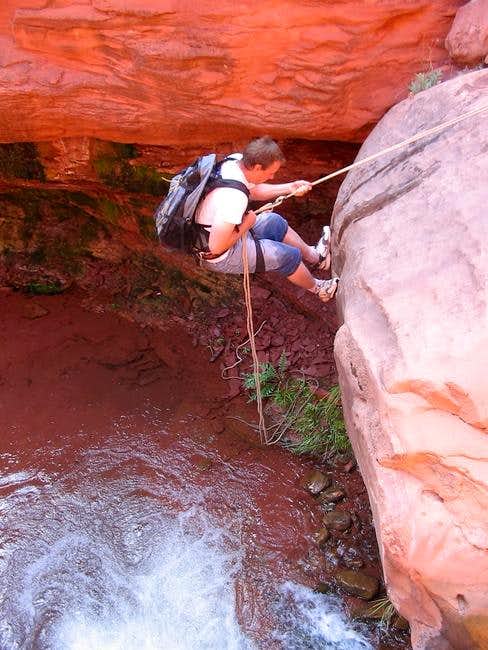 Luckily, the La Sal Mountains are almost all public lands, and this means you can camp almost anywhere you want to. This is true with roadside and backcountry campsites. There are a few exceptions right around Moab and in the foothills.

A complete list of campgrounds can be found on the site below: 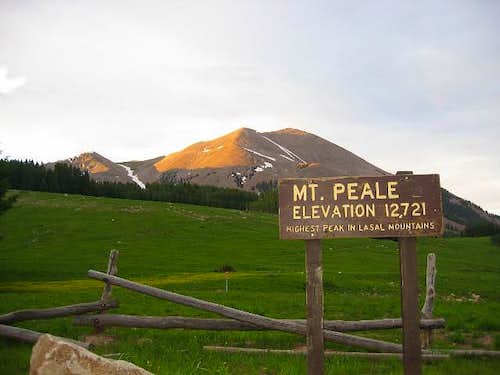 Good campsites such as this one at the base of Mt. Peale abound in the La Sal Mountains.

Because of the great differences in altitude (from below 4000 feet around Moab to over 12,700 feet on Mount Peale), it is impossible to say when the best time of year to go is. On the highest peaks, a few “permanent” snowfields exist. Deep snow sometimes last until July.

On the other hand, the lower foothills and the area around Moab swelter under heat sometimes above 110F in the summer.

The plan is simple. If you are hot, head for the alpine peaks to cool off. If you are cold, head to the desert to warm up. In the summer, you can roast in the desert while viewing the distant snows of the mountains.

While most people visit the alpine peaks in summer, the La Sals offer the offer some of the most accessible higher peaks in the state in the winter. While very few 12,000 peaks in Utah can be climbed in a single winter day, some of the La Sal Mountains can. This is an added bonus for those whom want to do a winter climb of a 12,000 foot peak in Utah, but don’t have the time or equipment for a 4-10 day trip, as is typical of the other 12,000 foot peaks in the state.

Most people head for the desert towers in the spring and fall. Winter can be especially nice at lower elevations as well, but I would avoid the desert peaks and towers in summer unless climbing in a virtual oven appeals to you.

Weather and climate data for the Cisco/Dewey Bridge at 4300 feet elevation, is below. *National Weather Service Data 1952-2004.

Below is the *climate summary for nearby Blue Mountain Ski Resort (no longer operating) at 9175 feet elevation, and in the nearby Abajo Mountains. These are all averages, so expect more variation, but this will give you a good idea about the climate at mid-level to higher elevations in the area. The La Sals are typicially colder (due to higher elevations), wetter, and recieve quite a bit more snow than the Abajo Mountains, but this is the closest data available. *National Weather Service Data.

There are no weather stations or data available for the highest peaks, but a general rule would be to subtract 10-15 degrees (less on winter nights) to the middle elevations data shown above.