The peaks in the La Sal Mountains are often viewed, but realitively few people climb them. They form the famous backdrop behind such famous areas as Arches National Park, Canyonlands, and Moab. Less famous, but just as spectacular it the view from the east and near Gateway Colorado. The La Sal means "The Salt" in Spanish and the mountains were named by the Dominguez/Escalante Expedition in 1776. There are two stories about the naming of the La Sals. The first is that they were named because the soils and valleys surrounding the mountains contain salt. The second is that since the Dominguez/Escalante party passed through the area in August, they just couldn't believe the mountains were covered with snow, so they assumed they were covered with salt as are some of the surrounding valleys. Since summer temperatures often soar to 110F or higher in the valleys, the story isn't as far-fetched as it may seem.

As Grand County's high point, Mount Waas is the fourth tallest of Utah's county peaks. It is also the fourth highest peak in the LaSals, and the highest in the north half of the LaSals. It is sometimes known on older maps as Mount Nas or Mount Nass. Really old maps simply label the peak as La Sal.

Mount Waas was used as a survey station as early as 1882 the peak had a "heliograph station" on the summit during the 1880's. The station was run by the Coat Guard and Geodetic Survey to determine altitudes and locations.

There are no technical routes on the mountain, but there are many large boulders and loose talus to deal with on some routes.

Note on the name of the peak:  Some sources say that the name stems from Ute origin. Waas also apparently means "man" in the Ute language.  Others saw Waas was a Ute Chief.

Interestingly, the letters WAAS also has surveying connotation. WAAS is an extremely accurate navigation system developed for civil aviation. Before WAAS, the U.S. National Airspace System (NAS) did not have the ability to provide horizontal and vertical navigation for precision approach operations for all users at all locations. Nas or Nass is the name on older maps of the peak.  This seems too much to be a coincidence to me, but all other sources say that the word Waas is of Ute origin. 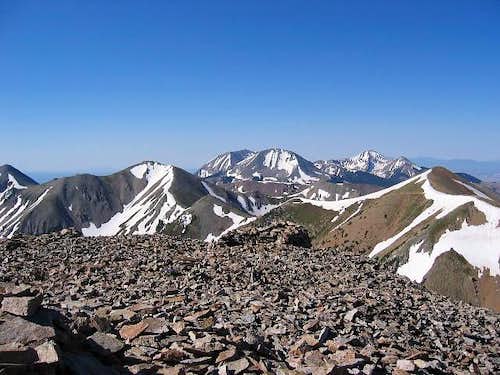 Looking south from the summit of Mt. Waas in July.

The easiest climbing route goes north from Beaver Basin (Beaver Basin is located on the east side of the LaSals), but this trailhead is a longer drive on rough roads. A 4WD high-clearance vehicle is required. Alternate routes from Miner's Basin are longer and more strenuous due to their distance from Mt Waas; the road to Miner's Basin is also 4WD.

Drive north out of Moab on U.S. Highway 191 for 2.3 miles. Just before crossing the Colorado River, turn right (east) on Utah Highway 128, which runs right next to the Colorado, with beautiful views of the river as well as the redrock canyon walls.

In about 15 1/2 miles, turn right at the signs to Castle Valley and La Sal Loop Road.

From the turnoff to Castle Valley on Hwy 128 it is approximately 25.8 miles to Beaver Basin. Reset your odometer here. A high-clearance vehicle is required to make it all the way to the Basin.

Follow the main road (Mountain Valley Road) southward as it gradually gains elevation toward the mountains. The road turns to dirt at approx. 16.2 mi. Stay left as the pavement ends.

At 18.4 mi. turn right onto FR 107. At approximately 20.9 mi. take another right, after which you will soon pass a large forest service sign. Continue on this road to a fork at 22.2 mi. Stay right at the fork. After 1/10th of a mile you will see the sign for Dons Lake at another fork. Stay right at this fork, too.

At approximately 23.1 mi. the road forks once again, and as before, stay right.

At 23.5 mi. the road makes a sharp uphill u-turn to the right. In late July 2013 the top of the turn was narrow and eroded enough to make travel a little uncomfortable.

At 23.8 miles you will encounter the roughest section of the road. It is very slow going at this point.

At 24.8 miles you will come into the first clearing where camping is feasible. Continue down the road the last mile for better campsites at the actual trailhead.

Drive north out of Moab on U.S. Highway 191 for 2.3 miles. Just before crossing the Colorado River, turn right (east) on Utah Highway 128, which runs right next to the Colorado, with beautiful views of the river as well as the redrock canyon walls. In about 15 1/2 miles, turn right at the signs to Castle Valley and LaSal Loop Road.

At 10.7 miles you'll reach a junction, turn right or south onto LaSal Loop road. Follow the LaSal loop road south for 4.5 miles to the Miner's Basin road, turn left. A 4WD high-clearance vehicle is required, but this area is moderately popular and the road is used often. It is 3 miles to the road's end. There is a pond, parking lot, and outhouse in Miner's Basin. 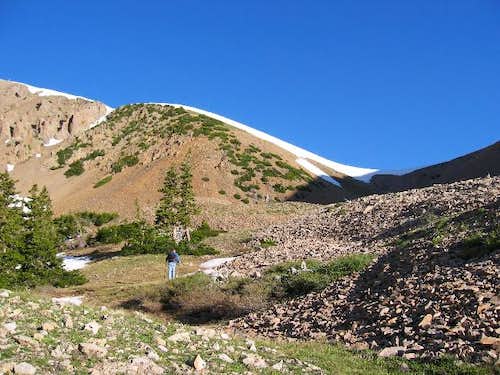 The Beaver Basin Route is on the east side of the mountain and is said to be the easiest, or at least normal route to the summit of Mount Waas.

The Miners Basin Route is a viable alternative and is probably the best trailhead in the winter or spring, though you must walk from the LaSal Loop road outside the summer season.

Warner Lake is another route that is sometimes used. 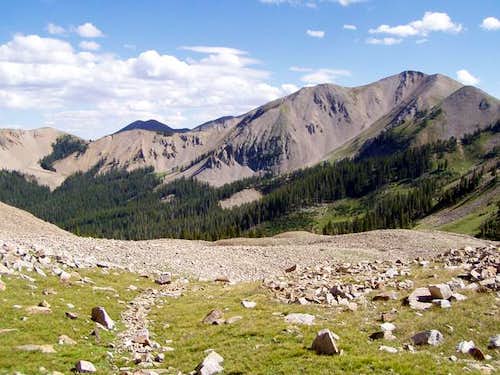 below the saddle SW of Waas, looking SE in September.

Mid-June through Spetember and early October is the normal summer climbing season, but the mountain can be climbed year round with the right skills. If you get an early start, May can be a great time to climb when the snow is frozen. Snow can eliminate some of the boulder-hopping, but once the snow softens, be prepared for post-holing. 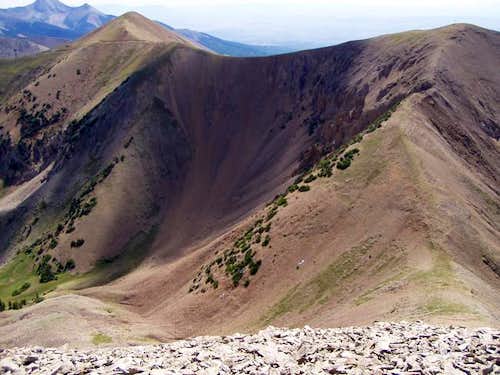 Looking down Mt Waas into Beaver Basin in September.

No permits are required. There was a time a few years ago when the road to Miners Basin was barricaded due to mining interest, but it is currently open.

There are plenty of campsites in the Beaver Basin and Miners Basin areas.