Mt. Baker Scenic Byway, more commonly known as Hwy 542 or Baker Hwy, connects the city of Bellingham to the Mt. Baker ski resort via the Nooksack River Valley. Hwy 542 enters the Mt. Baker-Snoqualmie National Forest just beyond the town of Glacier. The area sports over 30 hikes and provides access to over 45 peaks and mountains. Skiing, hiking, biking, snowshoeing, horseback riding, rock snow and ice climbing, snowmobiling, and dirt biking are just a few activities the area has to offer.

The highway was constucted in various stages between 1898 and 1927. From Deming east to Artist Point was given this designation of National Scenic Byway in 1967. The rest of the highway, from Deming west to Interstate 5 in Bellingham, was designated in 1993.

Hwy 542 provides the only access to the towns of Deming, Maple Falls, and Glacier. The area sees over half a million visitors and a year and is home to the famous Ski to Sea Race, an 88.5 mile mult-event race from the Mt. Baker Ski Resort to Bellingham Bay.

The Mt. Baker Ski Area has the prestige of having the most snowfall ever recorded in the winter of 98-99 with over 95 feet.

Take exit 255 "Sunset Drive, Baker Highway" off of interstate 5 and head east on Sunset Drive. After a couple of lights the speed limit will turn to 55mph and you're Hwy 542.

You can also access Hwy 542 from Hwy 9. Head North on Hwy 9 from Sedro Woolley, you will hit Hwy 542 Just before the town of Deming.

A Northwest Forest Pass is required to park at all trailheads along Hwy 542. $5 Dollars per day or $30 for an annual pass.

Where to get PARKING PASSES:

On the right (heading East) as you leave the town of Glacier.

Closed for the season after Oct. 11

The Nooksack tribe settled in this area around 5,000 years ago. It is commonly believed that the Nook-sa-ak tribe derives it's name from the Bracken fern, a staple food for the Nooksack. Another common belief is that it's means "mountain men", which would seem appropriate, and was given to them by the Salish tribes of the coast. Their Salish based language, though different than the coastal tribes such as the Lummi, is very similar to the language of the Squawmish tribe. It is believed that the Nooksack tribe broke off from the Squawmish tribe.

The earliest Nooksack scooped out semi-subterranean dwellings of up to a dozen feet deep, then capped them with pitched bark roofs. Subsequent generations constructed aboveground longhouses of cedar boards.

The Nooksack tribe utilized travel by canoe when possible. Their fishing grounds extended from today's Bellingham Bay to British Columbia. Nets and fish traps were used to harvest salmon. Families shared smokehouses along the banks of the river during spring and fall, where they cleaned and smoked numerous species of salmon and other fish. 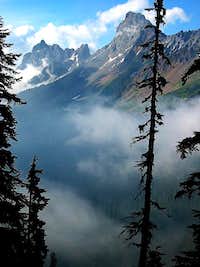 The Nooksack were also clammers. They gathered meadow berries, stalked mountain goats for food and skins, and grew wild carrots called sbugmack. The majority of their diet consisted of fish and fern roots. The Nooksack reverenced the earth and its bounty in religious ceremonies.

The Nooksack never signed a treaty with the U.S. and were subsequently overlooked and not given a reservation. With no treaty to offer them any protection they were vulnerable to loss of their lands to white settlers. It was not until 1958 that, though landless, the Nooksacks won compensation for the loss of their lands, whose value was pegged at 1858 dollars. In 1873, a U.S. government attempt was made to relegate the Nooksack to the Lummi reservation. However, the Nooksack returned to their upriver sites because they felt no close affinity with the Lummi.

The Western portions of the North Cascade are composed mainly of metamorphic and igneous rock, the result of plate convergence. Though volcanic rock translates into chossy conditions relative to most types of rock we like as climbers, the rock is stable enough to provide plenty of excellent and relatively safe scrambling.

The rock ranges in age from hundreds of millions of years old to still forming.

"The priciple rock units in the region of interest are the Shuksan Suite, the Yellow Aster Complex, the Chilliwack Group of sediments and volcanics, the Nooksack Group, the Chuckanut Formation, the granitic intrusives of the Chilliwack Batholith, and Mt. Baker Volcanics."

Unfortunately if greenhouse warming continues at projected rates the North Cascades could lose one half of its glaciers within the next two decades.

On average the area recieves 18ft of snow per year. This means that before June you'll want snowshoes if traveling above 2,000ft. By June and later however most slope below 3,000ft will be melted out. Southern slopes will melt out first due to increased sun exposure. By mid-june most slopes below 5,500ft will be melted out and by mid-august snow will only persist on north slopes above 7,000ft or on permanent glaciers.

Someone is killed by an avalanche almost every year here, 2006 has far outpaced that average already. Learning, practicing, and dialing your avalanche diagnostic and rescue skills will help keep you, your partner, and your potential rescuers alive. Avalanche courses are available throughout the year from a number of reputable agencies. Courses are offered locally by theAmerican Alpine Institute and theMt. Baker Ski Area.

If you like wildflowers, old-growth forests, and thick Pacific Northwest vegetation Hwy 542 is for you. In spring entire hillsides of avalanche lily will welcome you. In summer wildflowers abound including: heather, lupine, columbine, lot's of paintbrush, purple aster, yellow aster, beargrass, pink monkeyflower, trillium, foxglove, and more.

With such and abundance of vegetation many species of animal can be found here. Birds include: Bald eagles, Osprey, Ravens, Crows, Gray Jays, Stellars Jays and more. Black bear, mountain goats, hoary marmots, deer, Mountain Lion, Bobcats, Beaver, and others appear to the lucky.