Instead of the well-known list of state highpoints, there ought to be a list of each state’s wildest summit.  Criteria would include its wilderness setting, the quality of wildlife, and aesthetics of the approach, climb and summit views.  I do not have the experience to nominate any for inclusion on the wildest list for most states, but I think I may have happened upon the Wisconsin entry: Lone Rock.

The less than 200 feet of altitude gained does not impress, but the journey has a wilderness feel rare for the Midwestern US.  And because wilderness experiences such as this are so rare here, they are precious to me.

Wisconsin does not have many entries of any kind, wild or otherwise, in SummitPost.  But when scouring maps for places within easy driving distance of Chicago, I ran across a region in Central Wisconsin that contained a scattering of knobs, mounds and mesas.  These were the remains of a set of islands that peppered the melt waters of the Wisconsin glaciers in the last Ice Age.  Capped by more resistant rock, they resisted washing away from the melting lobes of the nearby ice sheets, existing as islands in that ancient glacial Lake Wisconsin.  The waters flowed away, leaving a flat lake-bottom plain, but the islands remain.  Some of these mesa-like rock piles are famous as state parks in the Wisconsin Departmentof Natural Resources system (Roche a Cri, Mill Bluff).  But some are tucked away, far from renown and people, and unexpectedly beautiful.  Lone Rock is one such place.

Lone Rock sits in the middle of the Quincy Bluff and Wetlands State Natural Area.  It is surprisingly and dramatically remote for the Midwest. The area was acquired by the Nature Conservancy , an organization I have grown hugely impressed with as I have travelled around the upper Midwest.  This was the third time I enjoyed a summit protected by this group in the last 4 months (Bare Bluff and Mt. Lookout in Michigan are the other two).  The hope is that the large area will support bobcat as well as other wildlife.

The trailhead is located in Central Wisconsin, about 1.5 hours north of Madison (or a half hour north of the water park Mecca of Wisconsin Dells).  Going north on route 13, 2-3 miles before you reach the town of Friendship, you will intersect with county route E coming in from the east.  Instead turn left (west) onto Dyke Drive, taking it about 1.5 miles until it turns right (north) onto 14th Drive.  Very soon you will spot a snowmobile crossing sign and find the tiny dirt parking area on the left (west) and a small sign for Quincy Bluff and Wetlands.

The trail is an old two track that starts past the metal gate.  It travels first west along a forest edge and cleared/burned area, then plunges south into the heart of the swampy, brushy forest.  The entire three miles of the approach was plagued by the most continually voracious cloud of mosquitos I have ever encountered (early July 2013).  The muggy and overgrown two track plods through the forest in gentle twists and turns but generally south, and occasionally gets a little marshy.  The whine of mosquito attacks is soon joined by the gentle tap-tap-tap of ticks dropping onto your hat.  You will soon believe that rumors of ‘Lone Rock’ were a horrible lie, prepare yourself for disappointment, and curse your foolishness in chasing this phantom objective through the green and buggy hell. 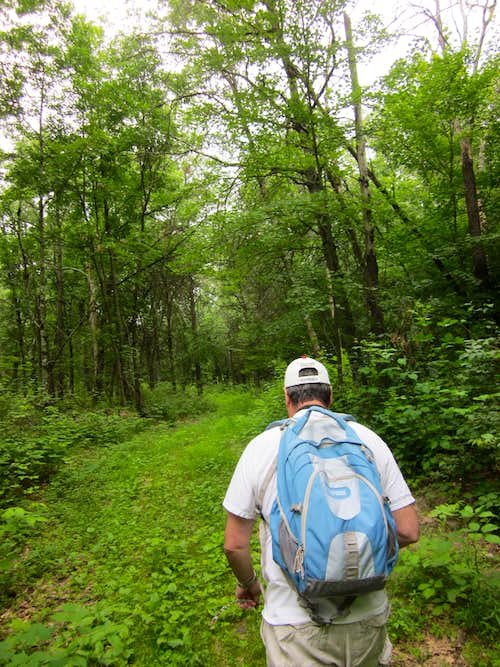 But you will be surprised.

Lone Rock’s northern prow will suddenly appear dead ahead, above the canopy of trees.  The trail loops around the rock, and I suggest you go right (west) and enjoy the views of your objective that open up through an area cleared by a controlled burn, but now a green and lovely meadow.  Large raptors of some kind (probably turkey vultures) circled the long rocky ridge as we approached.  Even the bugs seem to drop away. 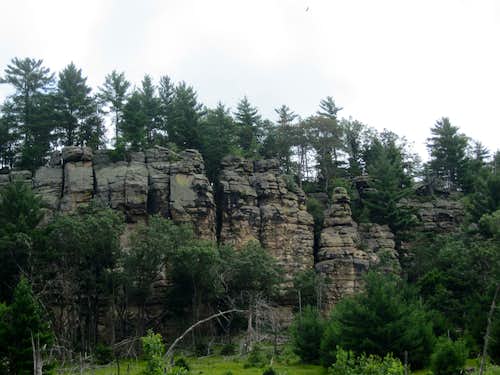 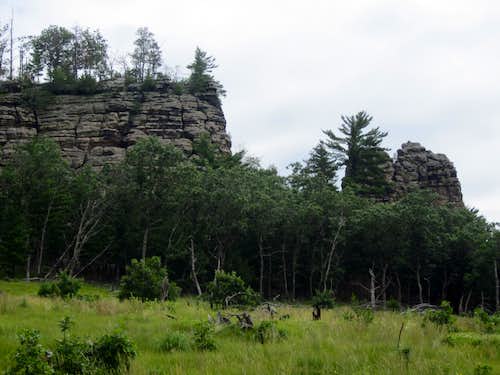 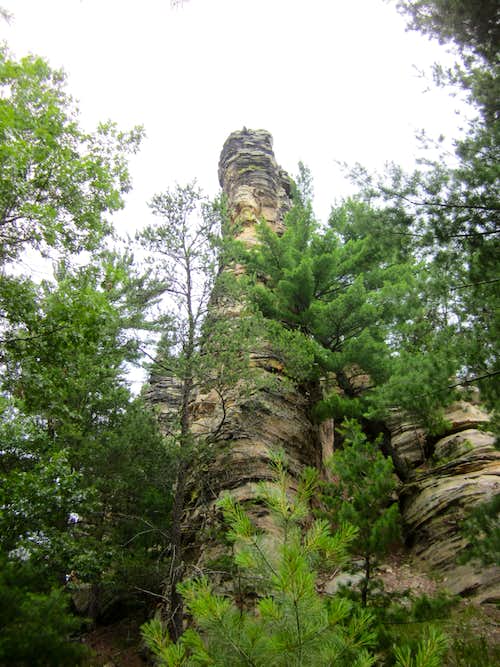 Lone rock is a mesa of sandstone mostly oriented North-South.  The west side has a few possible ways up, and one perfect one.  The possible ways are all cracks/gullies directly up the west side.  The one we tried was harder than it looked. 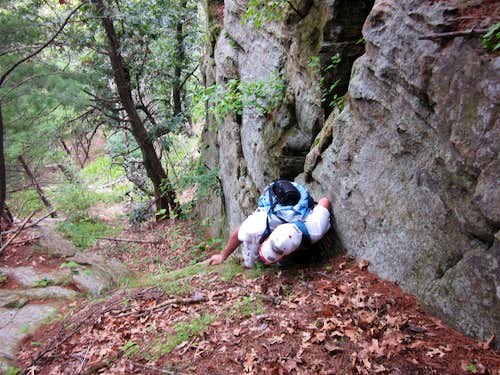 There are many ways up Lone Rock in Wisconsin.  Dennis Goldsmith negotiates one of the less graceful ways up.  July 3, 2013.

The easiest and most serene route is to move south down the west wall until you locate a north pointing gap between the main sandstone ridge and another outlying parallel mini ridge, and walk up the canyon that separates them.  It is quite
nice, with pine needles cushioning your steps up. 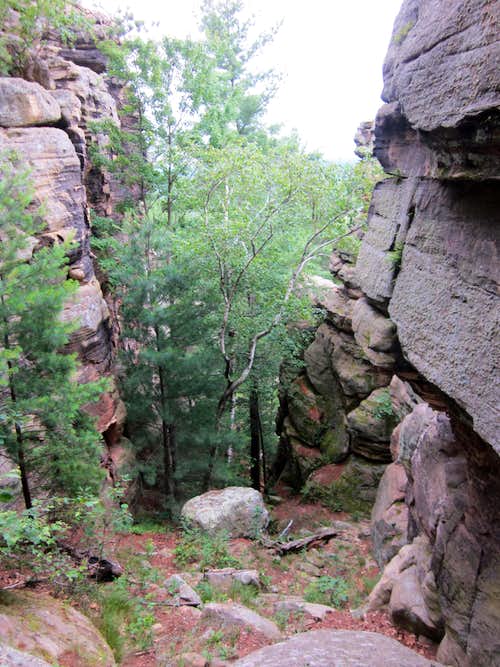 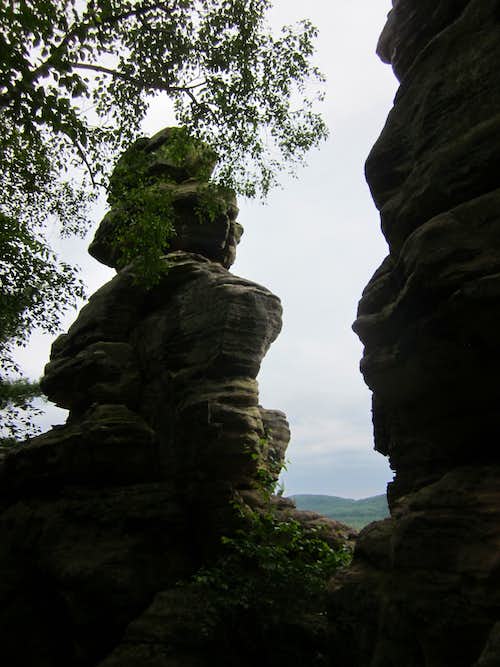 Initial views are treed in, but travel north up the small ridge and enjoy great views on a narrow, exposed rock ridge... 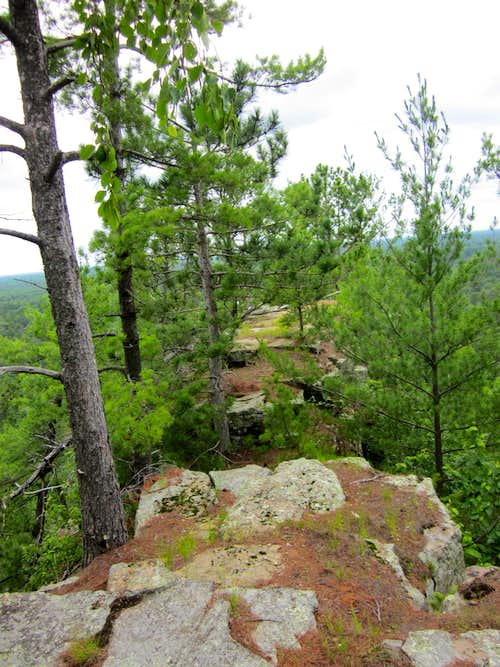 As one moves north atop Lone Rock, the footing gets skinnier as the views expand.  July 2013.

...that  finally ends in the perfect lunch platform that juts out and over the forest. 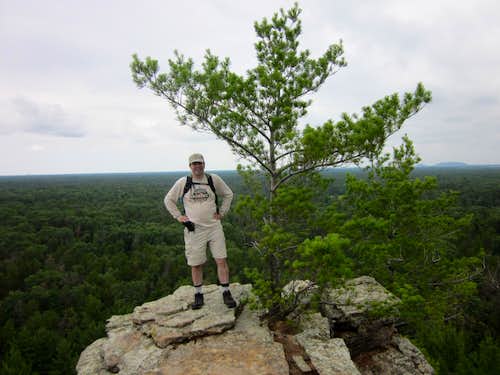 This is the finish of the Lone Rock hike, at the end of the North Ridge.  Wisconsin, July 3 2013.  Roche a Cri and Friendship Mound are on the horizon at right.

An even more exposed perch juts out a little further, just below the main platform, but I did not venture to try it out. 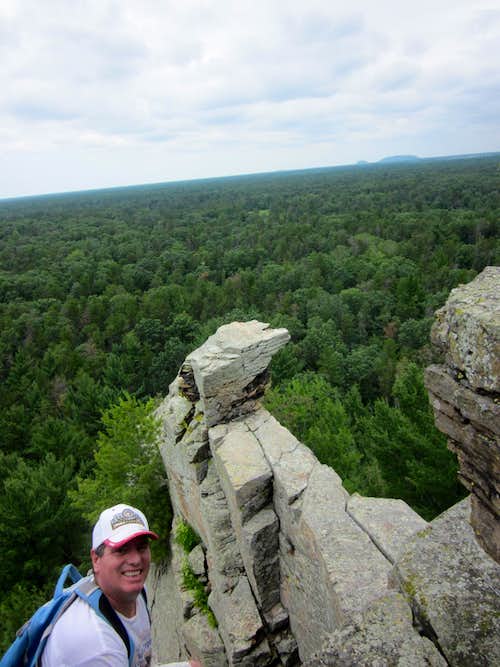 This airy extension of Lone Rock's north ridge juts out and over the forest, and the exposure would be intense, should you try it.  I did not.  Neither did my friend Dennis Goldsmith after sizing it up.  July 3, 2013.

Enjoy a view entirely of woods, hills and water.

The Nature Conservancy claims this area is like seeing Wisconsin 300 years ago.  They are not lying.  Aside from an occasional sign, you will see very little evidence of civilization the entire hike – from the approach all
the way and including the summit view - which is entirely natural.  We saw a couple of wild turkeys on the trail in.

Two other ‘islands’ are close by – Rattlesnake Ridge to the East and Quincy Bluff to the west.  On the Northern horizon are several more members of this ice age archipelago:  Roche a Cri, Friendship Mound, and Petenwell Rock. 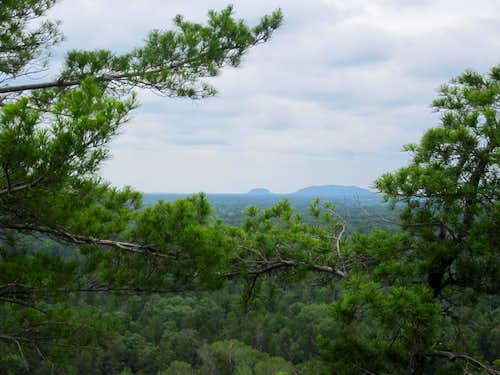 Other islands in the glacial meltwaters of the Wisconsin glacier appear from the views at Lone Rock.  Here are Roche a Cri (left), and Friendship Mound.  July 2013.

This is entirely worth the 3 mile mosquito and tick hellstorm to get back to your car.

No camping allowed in the parcel.

Other than that, nothing I could see - not even a fee box.


Nature Conservancy Info about the Area

Summer is hot and buggy.   Would make an excellent snowshoe but be careful up top.