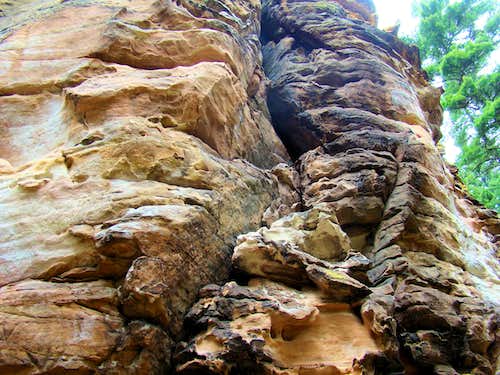 Roche-a-Cri Sandstone
A rather unique summit in Wisconsin is located in Roche-a-Cri State Park in Adams County, just north of the small town of Friendship.  According to the Wisconsin Department of Natural Resources (DNR), despite being unranked, this is the steepest summit in the state.  Concern over erosion of the rock and safety issues for climbers led the state to close off access in the 1970’s.  Then, in the 1990’s, a 303-step staircase was constructed to allow safe public access to the summit, with an observation deck at the north end.  Several area landmarks are visible from the summit, including Necedah Mound, Friendship Mound, Quincy Bluff and Ship Rock.  Plaques are installed at the summit platform to help identify landmarks.  The stairs to the summit are not maintained in the winter and are not open to pets of any kind. 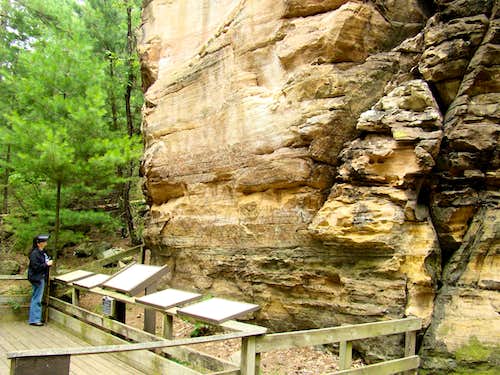 A Wall Full of Petroglyphs
The name Roche-a-Cri was given to it by early French explorers.  The name roughly translated means “crack in the rock”. While people are somewhat reluctant to use the term “butte” for summits like this in Wisconsin, this rock meets the definition of a butte. Composed of soft sandstone, the rock continues to be eroded by nature.  Long ages ago, it was formed by glaciers.  At one time, it was much higher and had a capstone of hard dolomite.  Once nature stripped that away, the erosion process has been much faster.  While some brochures claim a rise of 300 feet for Roche-a-Cri, Lists of John places that at 230 feet.  The forest around Roche-a-Cri boasts a variety of pines, oak, maple and some birch.  Autumn here can provide some great photo opportunities. Deer are commonly seen in the area, as are smaller animals such as raccoons, possums, skunks and a variety of birds.  Turkey vultures can be witnessed soaring on the thermals along the butte.  Bears are almost never seen here, since most of Wisconsin’s bear population is now predominantly in the northern areas of the state.

One of the major attractions at Roche-a-Cri is the opportunity for the public to view ancient petroglyphs and pictographs in the rock on the south side.  Some of the carvings are more than a thousand years old, while the pictographs are less than 500 years old.  This is the only place in Wisconsin where the public can see ancient rock art.  In addition to the rock art, there is some graffiti made in the 1800’s by early settlers in the area, plus some graffiti from more recent times.  It’s amazing how high some of the old carvings are, suggesting that they may have been made while standing on the backs of horses.  There is also evidence that some members of the Wisconsin First Cavalry Sharpshooters used the sandstone for target practice in 1861, judging by indentations in the rock. 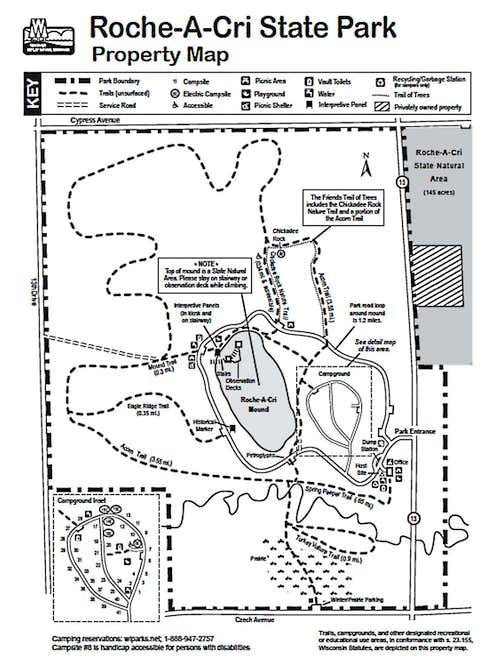 Roche-a-Cri Map
While there are about five miles of trails in the park (see map), the route to the top is relatively short, but somewhat strenuous.  When you stop at the park office, be sure to pick up a map showing where all the trails are located, and especially where the trailhead is for the 303-step staircase to the summit of Roche-a-Cri. The observation deck at the summit offers exceptional views for all visitors.

For those who desire more hiking than the climb to the summit, the park has trail descriptions available on this link:

Please note that in the winter, the trails are still open for hiking, cross-country skiing and snowshoeing, but that they are not groomed.   Click on the link below for a map you can download:

A daily or annual state parks permit is required.  Fishing licenses are required, as are hunting licenses in season.  There are restrictions on bringing firewood into the park.  No rock climbing or scrambling is allowed anywhere on Roche-a-Cri.  Access to the summit is permitted by the stairway only. 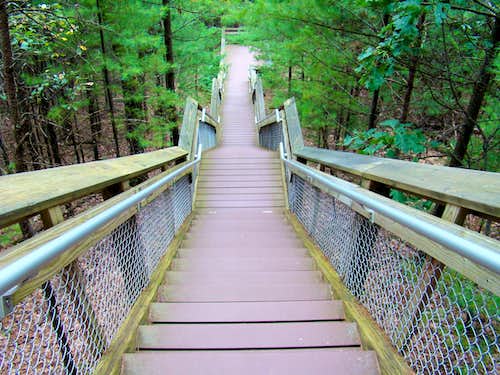 Steep Stairways Have Replaced Old Climbing Routes
Since the stairway is not maintained in the winter, and Wisconsin can receive deep snow in the winter, mid-winter climbs are not always a good idea.  It’s good to be aware that hunting is allowed in certain areas of the park during designated seasons.  Some useful links that will help in planning a visit to Roche-a-Cri State Park include: 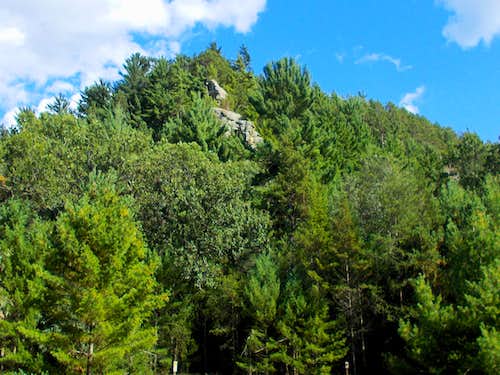 Roche-a-Cri Northwest Corner
Roche-a-Cri State Park has about 40 campsites of differing types.  Campers may register at either the office or the self-registration box at the office parking lot.  There are no showers, so please take that into consideration in your planning.  There are picnic tables, shelters and places for campfires.  Carter Creek passes through the park, so if you would like a trout dinner, you might be able to catch your fish on-site.

For more about camping at Roche-a-Cri State Park, click on the link below: 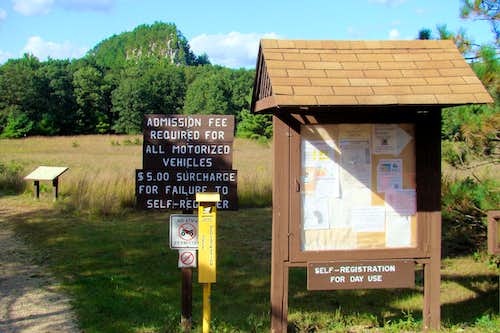 Roche-a-Cri South Trailhead
Roche-A-Cri is open all year from 6 a.m. to 11 p.m.  However the stairway to the summit observation deck closes at sunset every day. Park visitors not only have hiking trails, petroglyphs to see and fishing opportunities, but there are also sand volleyball courts and a playground for kids. The main entrance on Highway 13 is closed in the winter.  Access is still available at the Czech Avenue parking lot (paved) in the winter.