Saddle Mound is one of Wisconsin’s better peaks to climb and explore, and for good reason.  Located far from any major population areas, this public lands summit offers visitors an uncrowded peak in a beautiful semi-wilderness area.  Long-neglected, the peak is undeveloped for any current public use.  With only 71 ranked summits in the whole state (many difficult to access or on private lands), Saddle Mound’s 430 feet of prominence gives it a tie for 13th place in the state, according to Lists of John.   However, the Wisconsin State Cartographer's Office lists Saddle Mound at 1,409 feet, which would make it 12th place at 437 feet.  Because of the relatively flat terrain in the area, plus the sharp rise of the peak, Saddle Mound can be seen from many miles away wherever there are large clearings or high points in the heavy forest of the region.  Not many summits in the state standout as much as Saddle Mound does.  In addition, the history of the mound makes Saddle Mound a rare and unique place to explore as well as to climb. 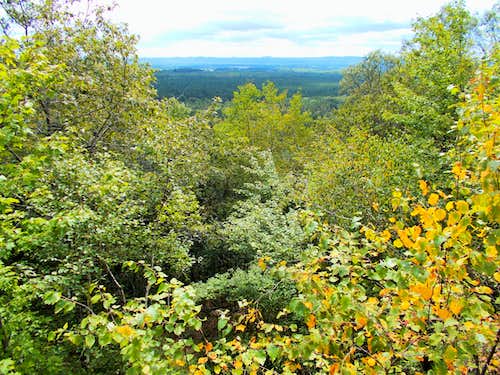 Heavily forested with pin oaks, with some maples and evergreens as well, Saddle Mound obscures much of its intriguing history, except to all those willing to explore her slopes.  The sandstone outcroppings on the peak only hint of the history in which that rock plays an important part.  The crest of Saddle Mound is at the west end of the summit and is capped by about 60 feet of the Lone Rock Formation, which accounts for some of the loose talus on the lower slopes.  Notable among the sandstone types found in the mound are Mt. Simon and Eau Claire sandstones. 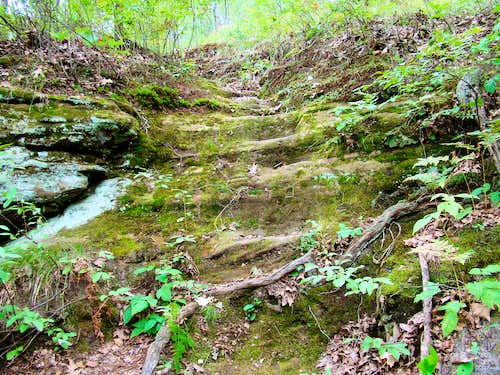 In the late 1800’s, several quarries were established on Saddle Mound.  Explorers examining the mound’s rock may now find drill holes left from quarrying operations of that time period. The Goodyear Company owned and operated one of the quarries, along with timber harvesting operations on the mound in the 1890’s.  Logging operations ceased in 1894 when all the timber was harvested out, and the quarry operations ceased the next year when that also proved to be unprofitable.  There had been a double track narrow gauge tramway from the summit quarry down the south slope, but all that remains now is an eroded route.  A railroad spur was once located at the base of the mound and was used to haul the cut stone to points far away.  Horse-drawn wagons also were used to remove some cut stone on a two-track road that went up much of the way to the summit.  There is still a stone stairway and railing near the upper end of the two-track.  A single track trail continues west to the summit.

A later development on Saddle Mound was the fire tower built in the 1930’s at the high point on the west end of the summit.  For a number of years, an old cabin at the base of the mound was used to house the fire tower agent.  In 2016, the tower was de-commissioned, along with all the remaining fire towers in Wisconsin.  Though the tower is still standing, the tower stairway has been blocked from public use.  A USGS benchmark is set in concrete northwest of the tower back in the brush. 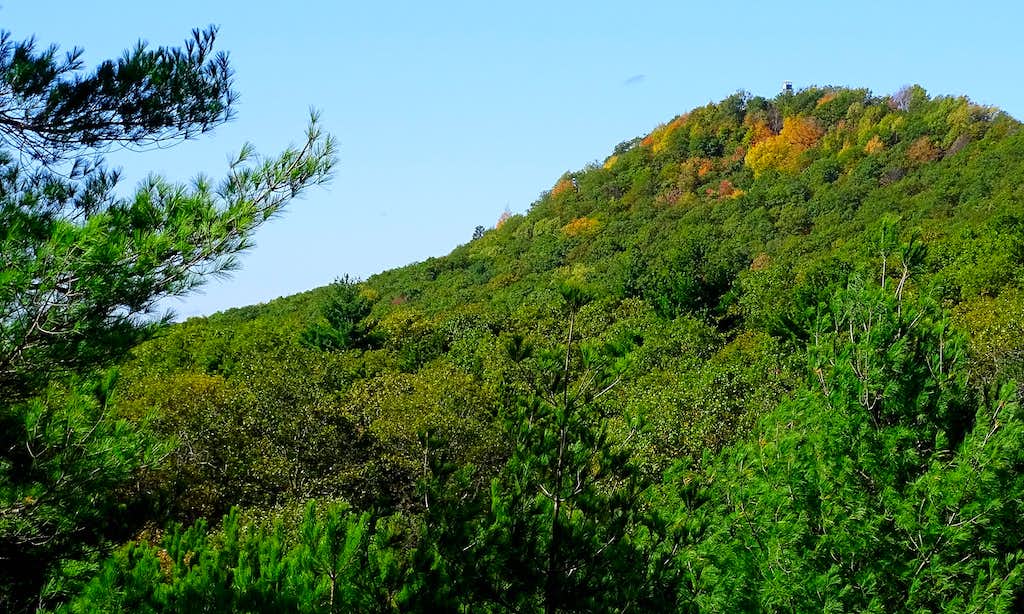 Going east from Black River Falls on Highway 54, Saddle Mound is about 17 miles past Interstate 94.  Just past the Pray Road, there is a Saddle Mound Road.  Follow that road north about .4-mile and you will see an old two-track road on the right.  This very sandy road is your route to the summit.  There is no parking lot, so in order to make a safe spot to park, pull off the road and park with your wheels off the pavement. The road shoulders are nearly level with the road and are fairly stable.

Once you are on the old sandy road at the southwest corner of the peak near Saddle Mound Road, you will come to a fork in the road at about .2 mile. The sandy road ahead on the right fork is the longer, but gentler route to the summit (marked in red on the map).  There are a couple other forks on the road, but you will quickly see they are rather poor roads and are obviously not the correct route. Keep in mind that once you reach the very old sandstone stairway (with short railing), you will be running out of two-track and have only single track trail the rest of the way to the summit.  Don’t look for any kind of signage, because there is none for either route.  This route is about 1.2 miles from the trailhead to the summit, with a little over 300 feet of elevation gain. 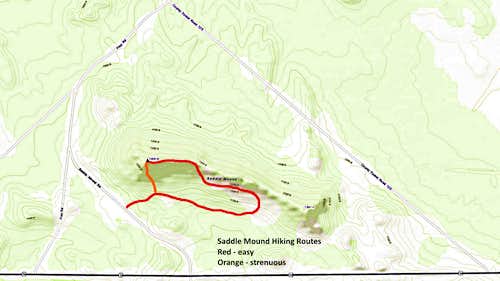 Now if you prefer a good workout and a quicker route to the summit, take the left turn at that fork near the start of the old roadway (marked in orange on the map).  What starts as an obvious route diminishes quickly as the ascent continues.  It only resembles a trail here and there. If you are not attempting this route in poor lighting or snowy conditions, there should be enough clues and glimpses of the summit to keep you on track to the old fire tower at the top.  This steep, but short route is probably less than one half mile.

Last of all, if you really prefer to bushwhack your way to the summit, the peak is essentially surrounded by roads, lessening the chances of getting seriously lost.  The underbrush can get to be tiresome, but there is always a prospect of stumbling onto some old relic in your explorations too. 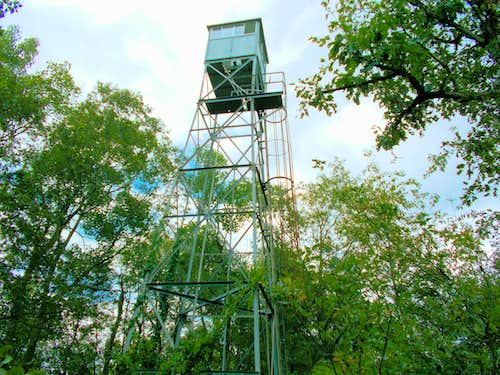 Saddle Mound Old Fire Tower
Because this land is a part of the Jackson County Forest and owned by the county, the public has ready access to the peak.  There are campgrounds throughout the county, but any camping at Saddle Mound is restricted.  For more information on use of forest lands, contact the county office at (715) 284-8475.
Their website also provides some limited information:
Jackson County Forest 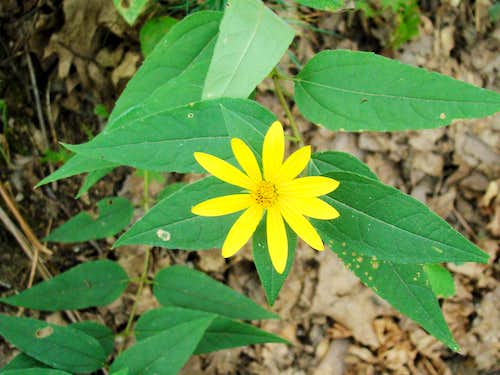 You may climb and explore any time of the year, but certain times are probably not in your best interest.  Hunting seasons might top that list, but deep winter snow can also be prohibitive.  In 2019, many parts of Wisconsin set all-time records for snowfall, with over 8 feet at some locations.  Also, no careful climber likes to be on any summit during lightning storms.  So be sure to check the links below to aid your planning. 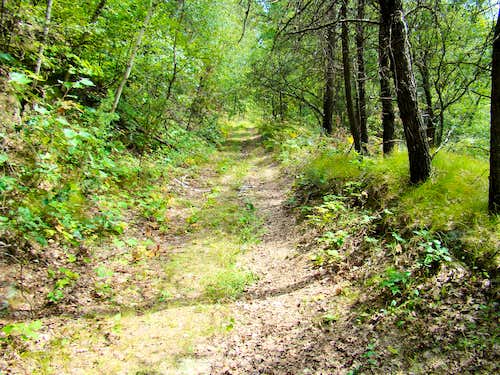 Good camping options in the area near Saddle Mound are found in the Black River State Forest.  You can access the latest information on each of their three campgrounds by clicking on this link:

Another good camping link is for the Wazee Lake Recreation Area: