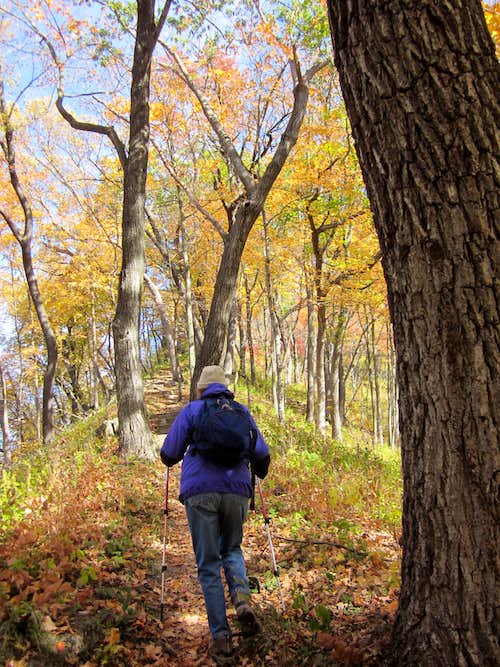 It sometimes is hard to write about America’s Midwestern ‘summits’ because even the lamest of mountains in the Western or Eastern US puts them to shame. However, when judged by the standards of the Midwest, some of these places simply must be acknowledged, because their rarity in this part of the country makes them precious. Wyalusing State Park in Wisconsin is one of these rare Midwestern places. Technically made up of two ridges (Sentinel Ridge and Wisconsin Ridge), I will combine them here into one Midwestern Summitpost objective: Wyalusing Ridges. These ridges create a long slender eminence at the juncture of two great rivers. Here you are offered a traverse with beautiful and unique vistas. Like all Midwestern summits, it gives us flatlanders a taste of the altitude we usually seek in other places.

Wyalusing State Park is located in southwestern Wisconsin. This park is located at the confluence of the Mississippi and Wisconsin rivers. It is about 4 hours southwest of Minneapolis and 4 hours northwest of Chicago, just south of the river town of Prairie Du Chien, WI.

This part of Wisconsin is called the ‘Driftless Area’ – the landscape not leveled flat by the last waves of ice age glaciation, so it has a more broken, steeper aspect than the flat as a pancake midwestern farmland that makes up the bulk of the central USA. Wyalusing is a Munsee-Delaware word meaning ‘Home of the Honorable Warrior’.

Yes, in the tradition of many Midwestern state parks, you can drive up to several of the overlooks I describe here. But it is possible to do a climb of one end of Sentinel Ridge from a trail beginning at the edge of the Mississippi river and traverse the ridge from south to north, finishing with a right turn up the western edge of Wisconsin Ridge. The ridge trail has a rare bit of climb (almost 500 feet) and even exposure by Midwestern standards. And its vistas and historical context are marvelous by any standard. A wonderful, diverse 5 mile long loop is possible as well.

The route to the only entrance to Wyalusing State Park is well signed. Begin by branching south off Route 18 south of Prairie Du Chien on County C, then turning right on County X. The entrance appears quickly a mile later on your right.

Take the main road of the park (State Park Lane) north past the entrance station, turning left on Long Valley road. Take a left at the next V junction, driving to the Long Valley Road’s end at the park’s boat landing. Go over the railroad tracks that run along the river and park. The tracks had frequent trains rumbling through when I was here last, so be careful.

The Trail Along the Ridges

The Sentinel Ridge trail begins immediately just east of the tracks you just crossed to get to the boat ramp. It immediately heads up the long slender end of the ridge, climbing gratifyingly through the trees. The slenderness of the ridge lets you look down from both sides of the trail, an experience unusual in this part of the country. 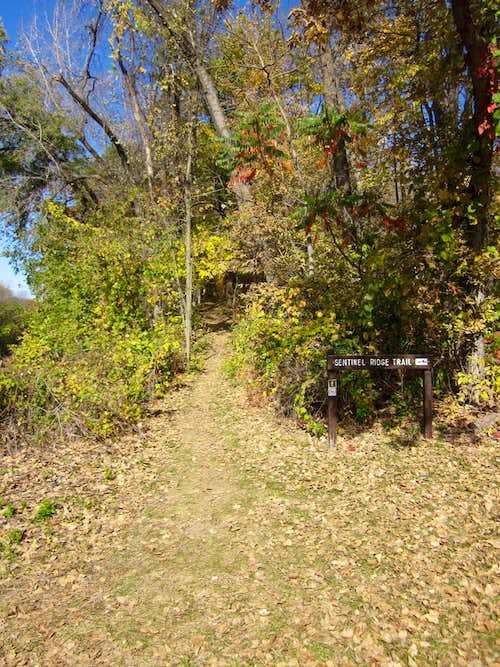 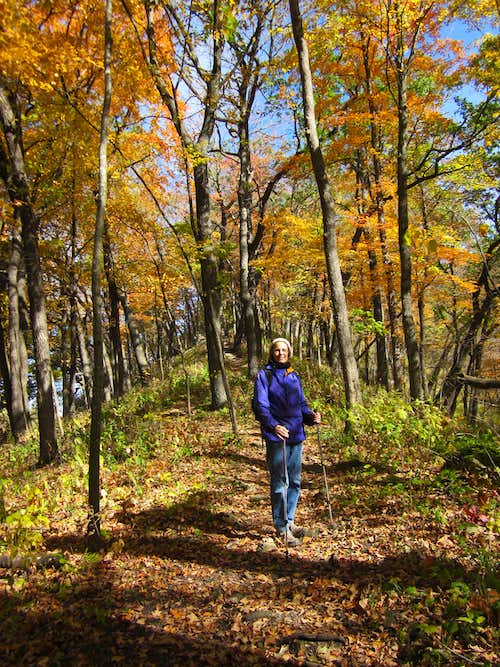 Heading Up the long slender ridge

Soon you leave the tracks and trains way below, and enjoy a beautiful mix of hardwood trees and wildflowers. In early October, the colors are superb. 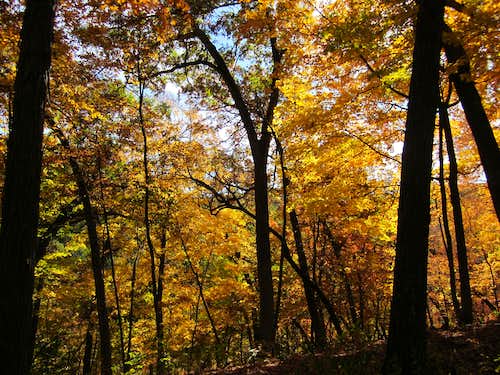 You start reaching some nicely exposed rocky viewpoints, where more and more of the Mississippi’s length is revealed. Soon you realize that low lying forested islands had blocked your view the river, and that the Mississippi is much wider than your initial view of it at the trails start. There are also surprising bluffs on the far Iowa shoreline. This first ascent has brought you 450 feet above the riverside you started at. 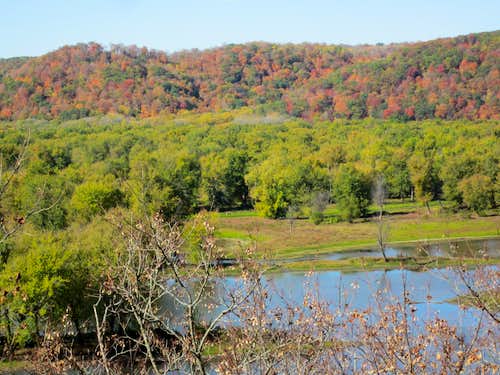 View of the Mississippi and the Iowa bluffs across the river.

Soon the vistas are shared with a string of 1,000 year old Native American effigy mounds . These effigy mounds are either gravesites or markers for the clans who used the area. While most here are conical or oval shaped, some are shaped into animal forms. The trail is now studded with small historical signs and a monument to Wisconsin’s last Passenger Pigeon. But the views just keep getting better and better. 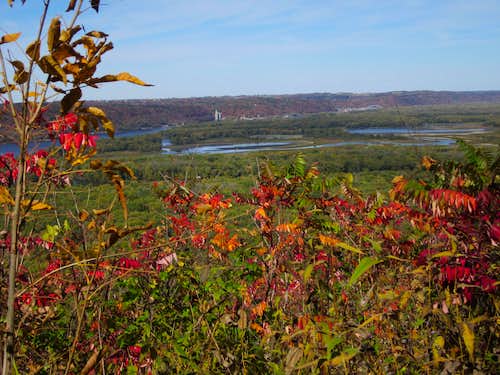 Views to the North from Sentinel Ridge

As you move north, you see more signs of civilization to the north, and you descend 150 feet briefly to a saddle and begin climbing again, this time what is called Wisconsin Ridge. As you curve around eastward to the north end of the peninsula, major viewpoints, as well as more car-bound tourists, appear. The Wisconsin river now takes center stage, its twisting confluence with the Mississippi broken by a slew of low lying, brushy islands. 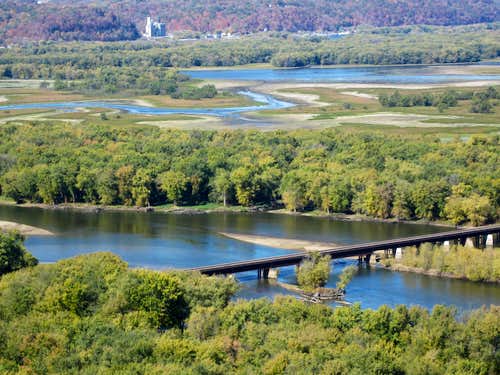 Confluence of the Wisconsin and the Mississippi Rivers

Marquette and Joliet joined the Mississippi here in 1673 via Green Bay and the Wisconsin river, the first Europeans to see it in the US heartland. 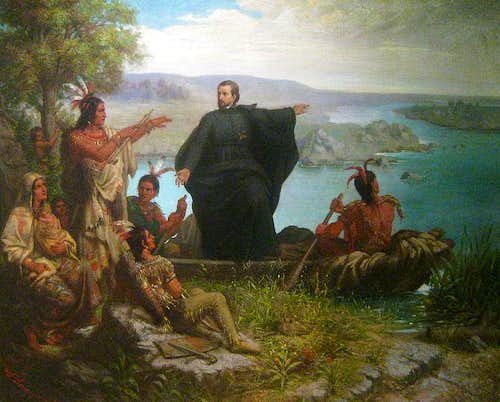 The viewpoints are more developed but do not detract from the experience. This is the Midwest, so the views include a town, 2 highway bridges and a rail bridge – but nature is still the star of this show. Interesting side trails go down the bluff a ways, though apparently not as far as they did previously on older maps (there are trail closed signs keeping one from going further). These side trails are definitely worth doing, as you see some interesting rock formations, as well as a small cave. A trails end you reach a nature center, the highpoint of the trail. 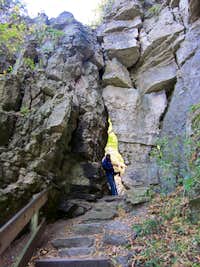 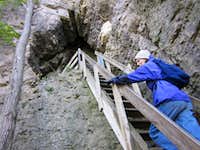 You can retrace your steps back down the ridge, but I would recommend making a loop through some of the park’s other trails. You can link together the Walnut Springs Trail, Turkey Hollow Trail, and the Sugar Maple Nature Trail to get back to the boat ramp. While these include a lot of prairie and forest hiking (along with jaunts past the usual mix of state park ball fields and buildings), there is a lot of variety, and some quite interesting side trails to explore.

I traveled this circuit in early October, when autumn colors were dazzling on a classic crisp Fall day. I am sure in other parts of the year either the mosquitos, or the north winds are fierce.

An excellent map of Wyalusing here

It costs non-Wisconsin Residents $10 per car, $5 for Wisconsin citizens.

The Why of Wyalusing

If you draw a circle 4 hours of car travel wide around my home, prairie bound Chicago, this is one of the top 5 places I would name as a destination (The others being Illinois’ Starved Rock, Wisconsin’s Devils Lake, Peninsula State Park in Wisconsin’s Door County, and the Indiana/Michigan Dune parks).

If you have not heard of Wyalusing before, you will be glad to check it out and add it to the slender menu of Midwestern climbing options.