*Please note that I've recently adopted this page after the original owner, Henry Timmer, left SP abruptly. It will take me a little while to rebuild it and though it will never hold a candle to Henry's former page, I'll do my best. Thanks for your patience.

Introduction to the Lost Coast and the Kings Range 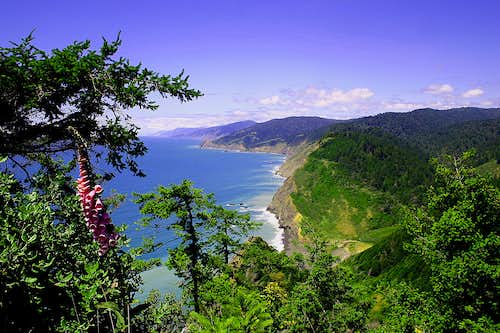 The Lost Coast and the Kings Mountain Range is a stunningly beautiful and remote chunk of wilderness. While some folks may believe that an area such as the Lost Coast and the Kings Range do not deserve a seat at the table, if you have a chance to go there and experience the trails and mountains, the draw of this magical place may change your mind. It is simultaneously a place for fitness and climbing, and a place to relax, heal, and rebuild for a future high-altitude climb. Depending your pace, it can be a relaxing or strenuous multi-day trek. There are also day-hiking options from the South, from the North, or from Shelter Cove. Primitive resupplying in Shelter Cove is also possible.

If you are hiking the Lost Coast trail from one end to the other, there are two ways to do it: south to north or north to south. Highway 1 abandons the coast for this 40 or so mile section of coastline, requiring the California Coast lovers to earn their views with hiking boots rather than with the internal combustion engine.

There are actually a number of trails that split off of the main lost coast trail as well. Some of them lead up into the mountains, some of them provide a different route and parallel the existing Lost Coast Trail. A few are listed below:

When I last visited (King Peak to Mattole River) there was a lean-to shelter on the summit of King Peak. Is it still there? Brutus

Briceland Road is closed at Needle Rock. We were told there was a washout before the summer of 2012 between Needle Rock and Bear Harbor with no plans for repair. So add the 2.7 miles on to the hiking distance. Also the Usal Road between Usal Campground and Briceland Road is very rough and rutted and not recommended for low clearance 2-WD even when dry.