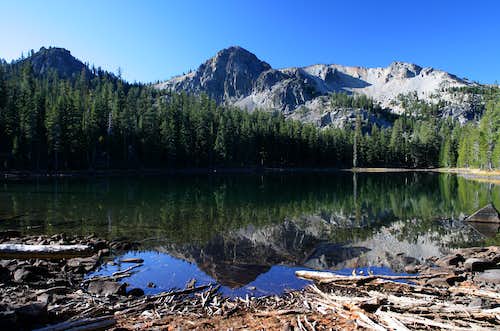 The Red Cliffs reflect in the waters of Everett Lake

Northern California’s Thousand Lakes Wilderness offers classic Cascade terrain; expansive old growth forests, cinder cones, lava flows, a plethora of shallow, tree lined lakes as well as classic, cliff shadowed lakes and a tall volcano with far reaching views from its summit. While one of northern California’s smallest wilderness areas at 16,335 acres, the compact unit of protected wild land nonetheless offers an overlooked and seldom used slice of gorgeous mountain real estate. This pocket wilderness is part of the greater Lassen area, lying only 7 miles north of Lassen Volcanic National Park’s northern boundary. Though compact, the Thousand Lakes Wilderness packs an extremely scenic punch. Whether amongst its lava flows and cinder cones, its high country lakes with views of soaring cliffs or on the rim of the ancient volcano with vistas of the entire California Cascades, this is a beautiful land that beckons to be explored.

As beautiful as the land is, it is ironic that such an enticing name as the “Thousand Lakes” would be so inaccurate. Nothing approaching the promised tally of lakes are to be found. In fact, only 9 lakes have names, the rest of the lakes being small nameless pools. Of the 9 lakes that are named, only three, Eiler, Everett and Magee, are first rate. Nevertheless, these lakes are classic alpine pools that offer great scenery, swimming and fishing. While the other lakes and tarns may not justify a more noteworthy designation, they are still attractive and offer scenic points to relax and ponder. 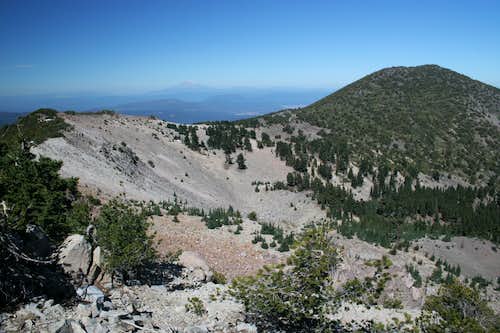 Mount Shasta is visible in the distance beyond Crater Peak

While the lakes may have been given first billing via the wilderness’ name, the true centerpiece of the Thousand Lakes Wilderness is the remnants of the Thousand Lakes Volcano. Prior to its prehistoric eruption, the peak is estimated to have been over 10,000 feet high. During its active period the volcano below its top, leaving a vast crater. In the subsequent epoch of glaciation, a large glacier formed in the crater and then began to move to the northeast. The crater rim was breached and the glacier scoured out a large valley. A smaller glacier formed to the south and followed a parallel path as the one that formed in the crater. The lakes now found in the wilderness are the detritus of these glaciers. Most of them are found in the Thousand Lakes Valley, the depression lying between the Thousand Lakes Volcano itself on the west and Freaner Peak on the east. Only a few lakes, notably the best two, Everett and Magee, are not in the Thousand Lakes Valley. These two lakes are higher up, at the base of the old volcanic rim. If one is more interested in high peaks and alpine terrain than in mountain lakes, the crater rim is the part of the wilderness that will attract. The highest point in the Thousand Lakes Wilderness is 8,677 foot Crater Peak. As its name implies, it is the highest point on the rim of the old volcano. Magee Peak and the Red Cliffs are also prominent points along the crater rim. Views from this slice of mountain terrain are fantastic, taking in both Mount Shasta and Lassen Peak. Other high peaks in the wilderness are Fredonyer Peak, a major spur off of the Thousand Lakes Volcano and Freaner Peak, a large shield volcano in the northeast corner of the wilderness. Additionally, there are a number of cinder cones, the largest of which are Eiler Butte, Hall Butte and the Tumble Buttes.

As previously noted, the Thousand Lakes Wilderness is class cascades terrain. Its character closely resembles that of the southern Oregon Cascades and would not look out of place if one were to scope it up and drop it next to such prominent Oregon Wilderness’ like the Sky Lakes or Mount Thielsen. The opportunity to enjoy that type of scenery so close to a National Park yet so devoid of crowds is an opportunity indeed. 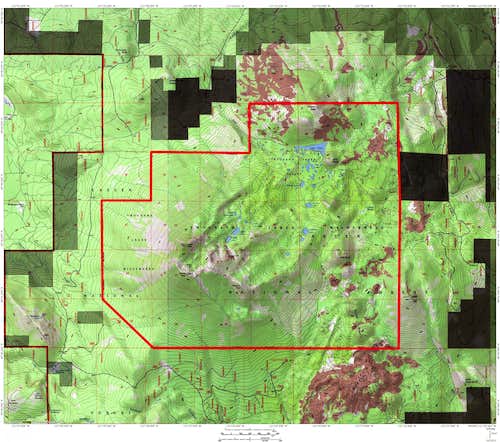 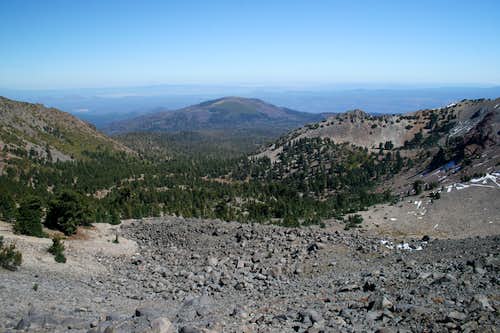 When standing on Magee Peak, Freaner Peak is visible through the breach in the crater rim

The Thousand Lakes Wilderness is one of the southern most areas in the Cascades Range. The Cascades stretch from southern Canada south through Washington and Oregon, all the way to Lassen Peak, which is just a few miles south of the Thousand Lakes Wilderness. Moving north through California, the Cascades begin with the Lassen area, which is encompassed in Lassen Volcanic National Park and moves north, including the Hat Creek Valley and many peaks that ring the valley, including the Thousand Lakes’ peaks, Sugarloaf Peak and Burney Mountain. It is reasonable to say that the greater Lassen area ends at the Pitt River and Burney Falls.

Beyond the Pitt, the Cascade crest is subdued and composed of scattered volcanic plugs and cinder cones before it reaches the Antelope-Butte Complex of peaks. From here the Cascade crest becomes more defined, eventually forming a single ridge moving north from Herd Peak to the Goosenest to Willow Creek Mountain then finally diving down to the Klamath River and entering Oregon. The grand peak of the California Cascades, Mount Shasta, is actually a large outlier, well west of the crest of the range. East of the crest extends the Modoc Plateau which is bounded in the east by the Warner Mountains. The pleateau is home numerous volcanic features, the most famous of which is Lava Beds National Monument. 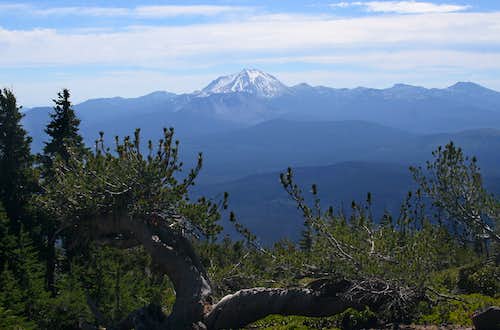 Lassen Peak dominates the vista south from the crater rim

It is within this regional context one finds the Thousand Lakes Wilderness. Even though it is at the southern end of a massive mountain range, the compact nature of the Thousand Lakes volcano and its accompanying wilderness as well as the rugged terrain surrounding it give it a more expansive feel than one might expect from its size. Indeed, the Thousand Lake Wilderness is the crown jewel of the larger, Hat Creek Valley region. It is bounded on the south by Lassen Volcanic National Park and on the north by the Pitt River. Its eastern boundary is the Hat Creek Rim, a long series of cliffs forming a 600 foot high rampart. The western perimeter of the Hat Creek Valley is made of the Cascade Crest, composed of, as previously mentioned, a series of high peaks, including the Thousand Lakes Volcano. The whole valley nakedly exhibits its volcanic past and boasts numerous lava flows. 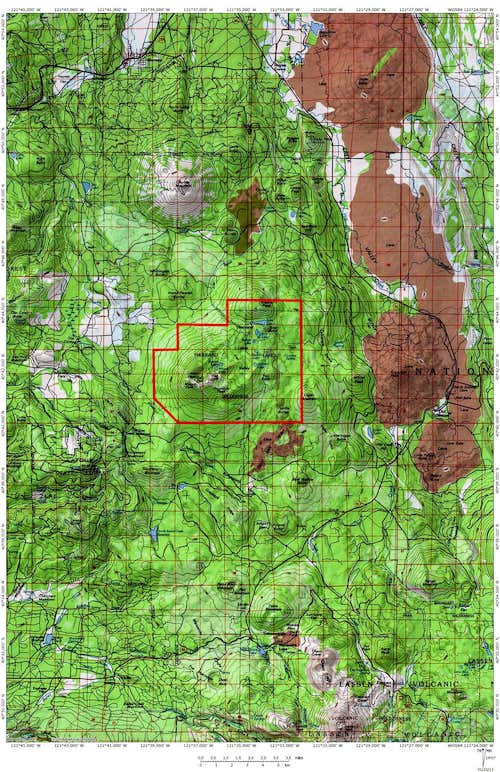 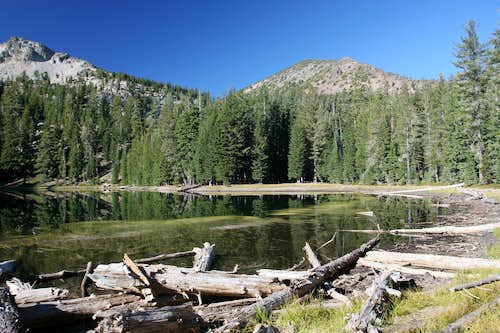 The Thousand Lakes Wilderness is served by four trailheads. These are conveniently arrayed on the side of the wilderness. Equally convenient, the trails all lead to the heart of the wilderness, which is the Thousand Lakes Valley. The valley is circled by a loop that passes by or near most of the notable lakes, including Eiler Lake, the wilderness’ largest. Those lakes not accessed by the central loop are passed by the trails leading to the loop from the various trailheads. In a sense, the central loop resembles the hub of a wheel, with the trails leading to the four trailheads constituting the spokes radiating out from the hub.

The trails in the Thousand Lakes Wilderness are all well maintained and well signed. The lone exception to this is the Magee Trail, which is the trail that accesses the wilderness on its western side. The Forest Service has condemned this trail. This does not mean that the trail is destroyed but rather that the Forest Service has discontinued maintenance of it. Although it is still passable, it will become increasingly more difficult to do so as snags fall on it and brush begins to choke the path.

The four trails that access the central loop are:

The northern side of the Thousand Lakes Wilderness is accessed via the Cypress Trail. This is the steepest route that goes directly into the Thousand Lakes Valley, but it is also the closest trailhead to Everett and Magee Lakes. If the lakes are the intended destination, this is the best option. The trail follows the typically dry Eiler Gulch, the Thousand Lake Valley’s primary drainage, passing through a forest of pygmy cypress before entire the valley.

Entering the east side of the wilderness, the Tamarack Trail has the shortest approach of the four trailheads accessing the Thousand Lakes Wilderness. The trail itself is fairly level and is the quickest route to Eiler Lake, the wilderness area’s largest body of water. If the intended destination is the higher lakes or the crater rim, this trail is 1.3 miles longer but it gains over 400 fewer feet than if one approached from the Cypress Trailhead.

This trail enters from the south and travels the Thousand Lakes Wilderness’ lonely southern region. Like the other trails, it heads directly for the Thousand Lakes Valley, passing several cinder cones and some lava flows en route. This is also the only trail that is in close proximity to both Durbin and Hufford Lakes, two of the better bodies of water in the wilderness. Hufford Lake in particular is noteworthy for two reasons. First, it is not actually accessed by the trail but requires a cross-country jaunt off of the Bunch Grass Trail. Secondly, it is the only lake that is on the remnants of the Thousand Lakes Volcano, but unlike Everett and Magee Lakes, it lies in a valley carved by a secondary glacier, not the one that breached the cliffs that ringed the crater.

The Magee Trail was initially constructed for the purpose of reaching a lookout tower that once stood atop Magee Peak. The tower has long since been abandoned and disintegrated but the trail remained. In the absence of the lookout tower, the trail, originating on the wilderness’ western border, became the most popular means by which the summit of Crater Peak was reached. However, the Forest Service has determined to officially abandon the trail and cease maintenance work on it. While it is still passable, it is gradually falling into a state of disrepair. The trail itself climbs steeply up the western flank of the Thousand Lakes Volcano. 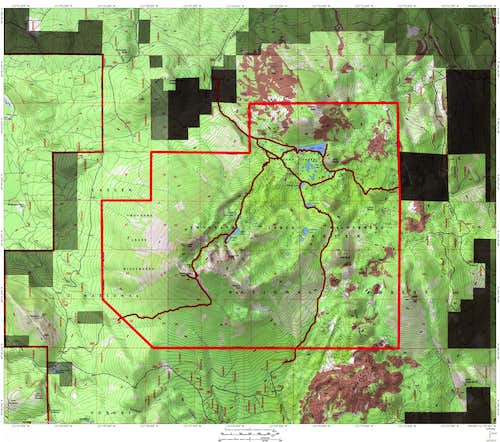 The Thousand Lakes Wilderness is generally accessed via Highway 89, which is only a few miles to the east. This is particularly true for the northern, southern and eastern trailheads. The western trailhead is also easily accessed from Highway 89, but it is a much longer drive than the other options. This trailhead can also be reached by driving Tamarack Road south from the town of Burney. This is a dirt road but is generally in good shape. It has the added bonus of passing the road leading to the summit of Burney Mountain as well as passing near the trailhead to Jack’s Backbone. 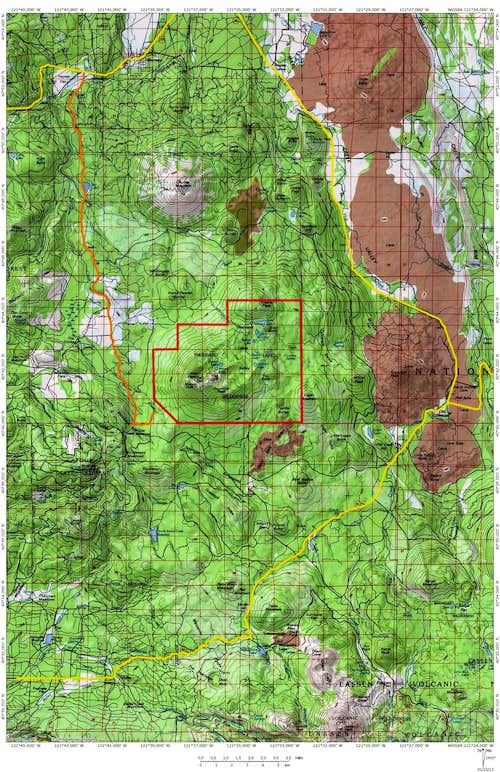 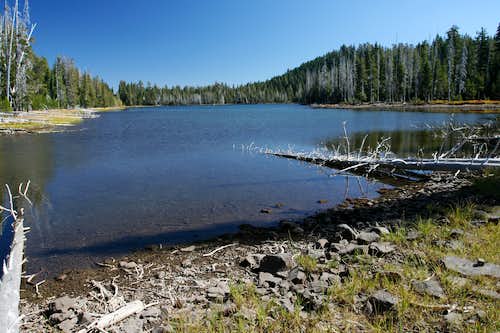 The Hat Creek Valley is well served by numerous Forest Service campgrounds, many of which are on the banks of attractive Hat Creek. Many of these are very near the roads leading to the Thousand Lakes Wilderness trailheads. Once on these roads and away from Highway 89, dispersed camping is permitted. Camping is also permitted at the trailheads. If one does not want to make use of dispersed camping on the west side, nearby Latour State Forest has two campgrounds.

Once in the wilderness, there are numerous prime campsites. The very best are at Everett and Magee Lakes, the former having the premier spots. The eastern end of Everett Lake has fantastic views and is near the water. In the Thousand Lakes Valley, most of the larger lakes have good campsites. Eiler Lake in particular has several excellent options. 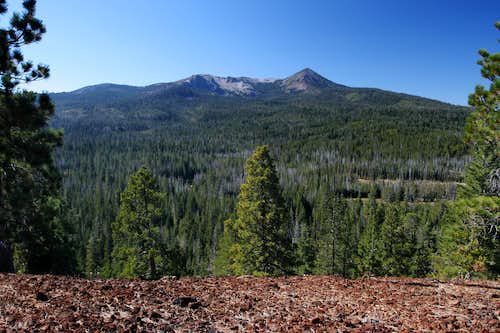 The Thousand Lakes Volcano seen from the top of Eiler Butte

Normal wilderness rules and ethics apply within the Thousand Lakes Wilderness. A free permit is needed for entry into the wilderness. They may be obtained at the USFS Old Station Visitor's Center.