This page will be kept in honour of the SP member Rahel Maria Liu,  the former owner of this page, died on 25 August 2004 on the Innominata Ridge (Monte Bianco) at the age of 34.

Mont Blanc du Tacul 4248 m is a snow-capped mountain located in the Mont Blanc Massif, Haute-Savoie, and one of the most important amongst the summits surrounding Mont Blanc.  The Normal route of Mont Blanc du Tacul is a no difficult route starting from the Refuge des Cosmiques and running on the glacier which occupies the Northern slopes of the mountain with variety of snow and ice types.  The refuge can be shortly approached from the upper station of the cable car located on the Aiguille du Midi, by descending about 300 meters (45 mn). The route itself is not very long and does not oppose big difficulties, but it should not be underestimated. It's necessary to take care of snow, seracs, and weather conditions.

Some fatal accidents took place along this route, due to serac falls or snow accumulation avalanches. The place can become cold and windy in a very short time. In clouds it's not easy to find the route on the glacier and there are some big crevasses near col du Midi. The route from col du Midi to the summit is just a steep glacier climb with difficulty PD+. The second part of the ascent route to the "Epaule" is exposed : long steep snow/ice slope over some big serac cliffs. The last 30 meters to the summit are of ice and rocks and partially exposed over the steep East face. Besides being climbed to reach the summit of the Mont Blanc du Tacul it is obviously also traveled as the first stretch of the 3 Mounts Blanc Traverse (Mont Blanc du Tacul, Mont Maudit and Mont Blanc), one of the most beautiful routes of low difficulty to reach the summit of Mont Blanc.

The Normal ascent route to the summit begins at the Refuge des Cosmiques and runs along the North-West slope and the West ridge. From the hut you descend to the Col du Midi 3532 m and then climb the steep NW flank, with a lot of seracs and crevasses. Arriving at the shoulder of Tacul you climb the same up to the rocks that border the summit. The route as a whole is evaluated by degree of difficulty PD+. 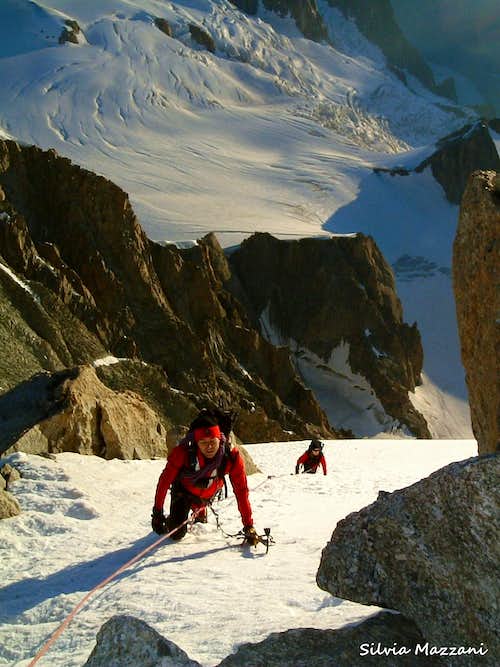 - The best solution is staying overnight at this shelter. From here the foot of the NW-flank of the Mont Blanc du Tacul is quickly reached (about 30 minutes).

- The bivouac Abri Simond is a not guarded cabane located in the vicinity of the hut,  open in winter time and other months when the Cosmiques hut is closed.

- Another option is to put a tent on the glacier below.

- The direct ascent from the Aiguille du Midi without overnight stay is absolutely not recommended because the climb requires a night departure.

The Refuge des Cosmiques can also be reached from the Italian side across the Glacier du Géant, a longer approach (about 3 hours) that requires the crossing of the glacier du Geant.  The starting point is Courmayeur, making use of the cable car rising from Entrèves - La Palud and leading to Punta Helbronner,  then on foot across the glacier du Géant. From the station of Punta Helbronner you reach the glacier and shortly the Col des Flambeaux. You go down towards the glacial cirque below the Mont Maudit, ignore the left track to the Tour Ronde and always downhill reach a plateau where you need to turn right crossing a stretch with several crevasses. The route continues slightly downhill reaching the base of the Pyramide du Tacul, where it begins to climb up towards the Col du Gros Rognon with constant ascent. Reached the Col du Gros Rognon you will go in the direction of the Refuge des Cosmiques. Info: Funivie del Monte Bianco.

The best season goes from July to Septemberp

Chamonix is a primary destintion, offering several accomodations (hotels, huts, gites, renting rooms). Numberless campsites are situated both in the Northern and Southern ends of the town. Main campsites:

The last maintainer of this page and early SummitPost member Rahel Maria Liu died for hypotermia on 24/25 August 2004 after being caught in a freak snowstorm while attempting to climb the Innominata Spur on the southern (Italian) face of Mont Blanc. Edward Allen, her climbing companion (a British climber known some days early), was saved by an helicopter of the Italian Rescue team.  Rahel was a charter member during SP's early days, and her work here remains among the best of SP's collected contributions. Her knowledge and experience has made an impact on the world mountaineering community, and her warmth and friendship will be long remembered among her many friends and fellow members here at SummitPost. She will be greatly missed by us all. She was only 34 years old. Continued maintenance of this page is in her memory.