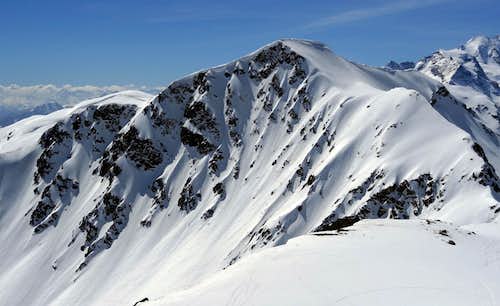 Monte Breva
Monte Breva also called in Switzerland as Piz La Stretta and in local dialet as Somp i Crap Nèir, is part of the Livigno mountains and placed on the boundary Italy/Switzerland.
The origin of the name "Breva" is the name of the wind "Bröa" that rise up very strong from the valley of Poschiavo. It is a debris dome with a rocky north side above the Valle del Monte.
Other sides are composed by smooth grassy slopes.
On the north side its connected to a mountain chain that surround the valle del Monte, and on the south side its enclosed into the valleys Forcola and Stretta.

Monte Breva north side
Monte Breva is often climbed from different routes due to its easy access, and the very panoramic point of view of the summit, first of all towards the Bernina group.
In the proximity of the summit, is placed a nice small lake called Lago del Monte with a confortable bivouac called Baitèl del Monte, 2606m.

The slopes of Monte Breva can be reached easily from different sides. Mostly from the italian Livigno Valley.
From Switzerland:
From the Bernina pass along the Valle de la Stretta or along the Valle della Forcola (closed in winter). Bernina pass connects the Valtellina and the Engadina.
From Italy:
From Milano - Sondrio - Bormio - Livigno - Campacciolo di Sopra 1910m. Access to Valle del Monte
By Bus:
From Switzerland: Line Zernez-Livigno Silvestribus
From Italy: Line Bormio-Livigno Bus Perego or APT Livigno 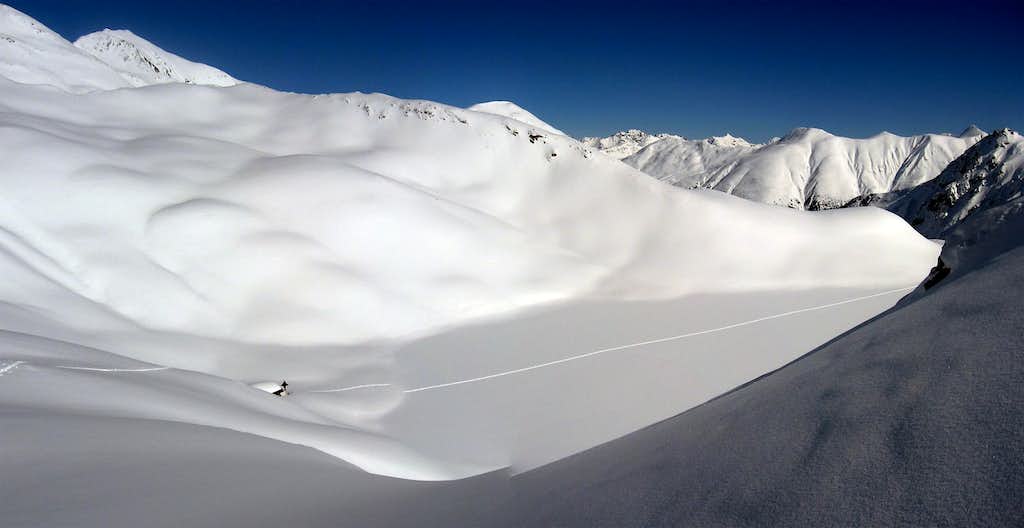 The Lago del Monte buried by snow. My ski track is visible above the lake.

SSE ridge: normal route. From Campacciolo di Sopra 1910m, get into the Valle del Monte. Take the path 105 untill the lago del Monte and then path 104 to the summit. The path 104 can be taken also from the passo de la Stretta 2476m. Diff. E
West ridge: From passo de la Stretta take the path that leads to the Fuorcla Chamuera. From there climb the brocken rocks untill the summit. Diff. EE
North ridge: Usually climbed from the Monte Garone. Nice linkage of peaks. The approach from Valle del Monte is easy but tedious due to its steep grass slopes. Diff. E
Ski routes: All the routes can be climbed with ski in winter. Suggested is the route from the Valley of Livigno, accross the Valle del Monte and the homonimous lake. Diff. BS S3

The Baitèl del Monte is a nice structure, built between 1974 and 1977, at the altitude of 2606 meters. It is reflected on the woter of the Lago del Monte. Now the bivouac is menaged by the "Moto Club Trela Pass" of Livigno. It hosts 10 sleep places, with stove, table with chairs and fireplace.
It is open permanently, and the last sunday of July became the meeting place for a local festival that receives a lot of success. It is can be easily reached from Campacciolo di Sopra in 1.30 hours. 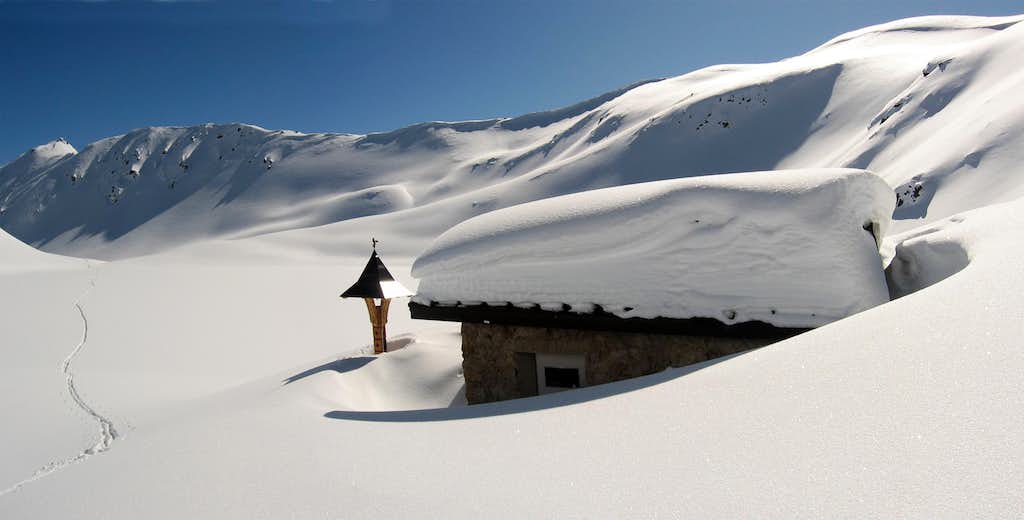 Video of the ski route

Video of the ski route from Livigno made in march 2013