The page has made in memory of the former owner Cyrill Rüegge, died on June 13th 2009 in an avalanche on the summit ridge of Piz Palü.
The page has been complitely rebuilt. 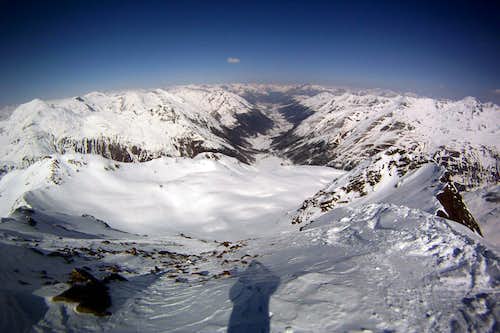 The valley of Livigno seen from the summit of Monte Vago
The "Livigno Alps" are a wide range of mountains stretch for 3/4 in Italy and for 1/4 in Switzerland. The group doesn't contain important or high peaks wherefrom get the name.  The name belongs to the italian turistic village "Livigno" placed on the north part of the range. However the most important summits over 3000 meters are away from Livigno and surround the "Val Viola", that tend to be overshadowed by the more famous Livigno ski area.

The borders of this area are the Engadina valley on north, the Val Bernina/Poschiavo on west, the Valdisotto on southeast and the Adda river on northeast. The source of the Adda river is the very nice lakes of Cancano.
The neighbor groups are indicated from the source of Adda river in clockwise sense: Ortles group, Bernina group, Albula group, Silvretta group and Sesvenna group.
The range’s character varies in each valley, often exhibiting diverse rock compositions: pyramid made of sands on the swiss boundary, gneiss rocks around Val Viola and brown limestone above the Cancano lakes.
The famous swiss village of Saint Moritz and the italian village of Bormio are also belonging of this range even placed in the nearby.
Exept for few rocky walls of the south branch, these peaks don't offers mountaineering targets. Anyway the smooth shape of the most of the mountains guarantees a good practice of ski. On the Livigno ski area first of all, but not less for freeride and skimountaineering. This is a snow paradise as much as the Engadina valley. 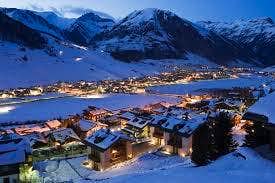 Livigno village
Livigno ("Livign" in the local dialect of Lombard dialet) is an italian village of 6068 cityzen placed in the province of Sondrio (Valtellina) at the altitude of 1811m. Among the highest common in Italy, is the most populous among the 26 municipalities italian places 1500 meters of altitude above sea level. It is part of the "Comunità montana alta Valtellina".
It is the northernmost town of Lombardy and among the highest in Italy. It is a duty-free area. During the turistic seasons there are plenty of vacationers who take advantage of the duty-free area for shopping or who have been attracted by the altitude of the place, leave the cities hot and muggy to take refuge in the cool climate of Livigno.
This town is in fact also known as "Little Tibet", because of the geomorphological features of the site, which are partly similar to those Himalayan (Livigno is in fact a plateau surrounded by mountains in the heart of the Rhaetian Alps).
The particular customs situation has created an anomalous situation of "business tourism", that is a significant transfer of people moving mainly to buy at more favorable prices. This situation is also evident in the high-density, structure and size of the stores.
The original main reason for the development of the free zone was related to the isolation that has long characterized this location, think of that until the winter of 1952/53 (the year of initiation of the opening of the winter pass "Foscagno") the community of Livigno remained completely devoid of any means of communication with the rest of the world for the entire winter, from the first snow fall until the snow melts in the spring.
It's winter charm with abundant snowfalls offers the ideal terrain for adrenalin filled days in powder snow. For freeride routes see the page here: "Freeride ski routes in livigno valley"
The two ski resort “Mottolino” and “Carosello-Costaccia” have one single ski pass and are connected by frequent ski buses which are free of charge. Both resorts offer a snowpark for freestyle lovers. This is why Mottolino’s park is among the best in Europe.

Summits of the range 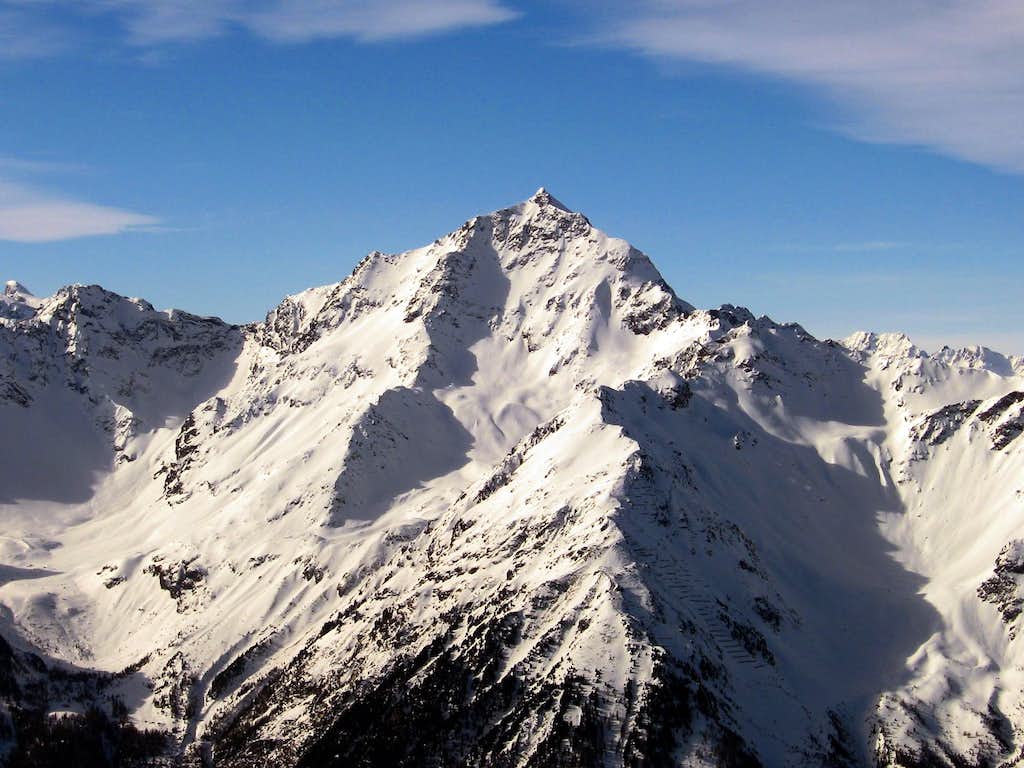 Cima di Piazzi from Bormio 3000. Southeast side
The mountains can be divided in 3 main branches:
The swiss boundary: 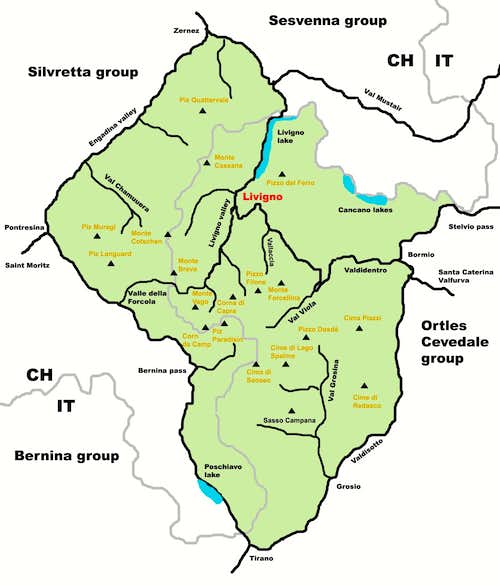 The head of Livigno valley and Alpe Vago

Costa delle Mine and Vallaccia

Lago di Livigno:
The "lago di Livigno" also called "Lago del Gallo" 1805m, is an artificial lake on the border italy/switzerland; at the southern end of the lake is the village of Livigno, a small part of the northern end is in Switzerland (Graubünden, village of Zernez).
In this point there is a hydroelectric dam built by the company Swiss Engadin Kraftwerke AG, half in Switzerland and half in Italian territory. Near the dam, in Swiss territory, there is the tunnel "Munt la Schera" that, about 3.5 kilometers long, connects the upper Valtellina and Livigno with Zernez and the Lower Engadine with a single lane. It was built by the Swiss company for the implementation of the dam itself, but from 1969 was opened to vehicular traffic. Remains open in winter, when the "Forcola di Livigno" (2315m) is closed, making it very important for traffic with Switzerland. To go this route, it is required to pay a toll (30 euros return for cars). From the swiss dam the river Spöl flows into the Inn far away. 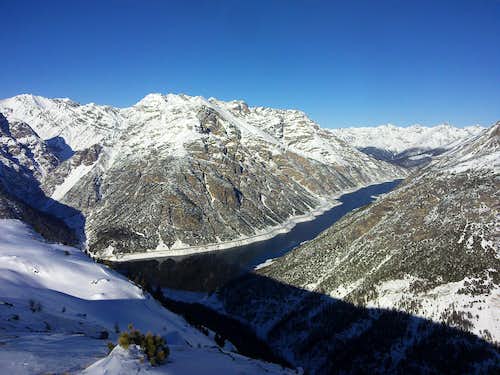 The Livigno lake
Laghi di Cancano:
The "Laghi di Cancano" are two artificial water basins contiguous, owned by AEM SpA Azienda Elettrica Municipale di Milano, sites in the "Valle di Fraele" above the "Valdidentro", not far from Bormio, famous tourist resort in the Valtellina area in the province of Sondrio.
These two basin are fed by the waters of many creeks that come out from the surroundings mountains. The 2 lakes are the source of the important river "Adda" that crosses the entire Lombardy region, and also of the creek "Acqua del Gallo" which is the source of the lake of Livino on the opposite site.
The two basins, despite their close proximity, have different names: "Lago di San Giacomo" 1949m and "Lago di Cancano" 1884m. 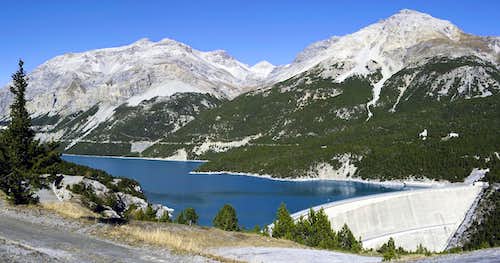 Main valleys of the region: 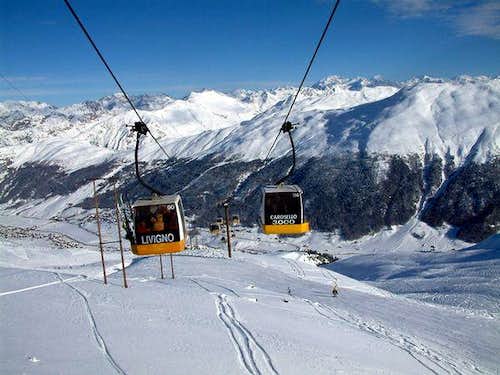 Livigno Valley
Valle di Livigno:
The Valle di Livigno corresponds to the municipality of Livigno village and is crossed by river Spöl. The Val di Livigno through the Forcola di Livigno (2315m) is connected to Poschiavo and St. Moritz, while the Foscagno Pass (2291m) is connected to Tirano and then in Sondrio, St. Moritz and Edolo and through the Munt la Schera tunnel just after Lake Livigno but already in Switzerland is connected to the val Mustair and then to South Tyrol and the Engadine Zernez then.
Few valleys belong to this: the Valle Federia, the Val di Campo and Valle della Forcola placed both at the south head of it, the Valle Alpisella, the Val Trela and the Vallaccia. It is the longest and most important of the Livigno Alps with a lenght more or less of 25 km. 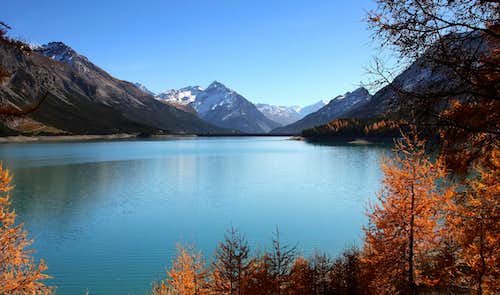 Valle di Fraele
Valle di Fraele:
The Valle di Fraele is a small world suspended, a plateau situated at an altitude of just under 2000m, almost surrounded on all sides by mountain peaks that draw, to die the day, astonishing landscapes of color. A microcosm full of echoes historical and legendary, as was in the past, nodal point in the communications between the county of Bormio, Livigno, Mustair and Venosta. The name probably derives from "ferratelle" or "fabrelle", in turn from "faber", with reference to the iron mines for which, in the past, the valley was known.
The towers of Fraele are just the first sign of a valley rich in history, due to its strategic location in Bormio county. These towers guarding in fact much of the magnificent land and allowed to report promptly any invading armies. The valley host the lakes os Cancano. 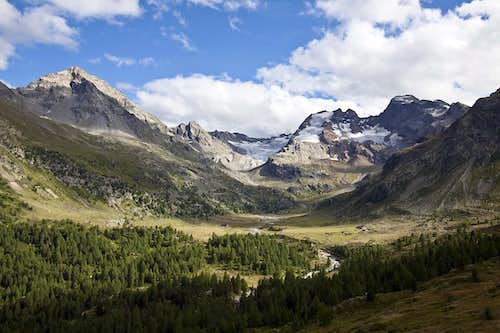 Val Viola
Val Viola:
The Val Viola: was white Valley in the past, according to a first interpretation of ancient handwriting "Albiola", which derives from the Latin "albus", "white". The valley does not, in fact, the image of a small river bed, while dominating the light: it is, in fact, large, bright, candid, for traces of ancient glaciers still appreciable for its orientation from east to west, gives the long hours of daylight. And it's origin, one of the two story of the origins of the wide valley of the Adda. The stream Viola Bormina, in fact, hired an ancient feud with the rival Adda, on the record for the name of the valley. Prevailed Adda, where it fell wide crowned with glory in its course and in the mountains, laziest, between the plains of the Po Valley.
The stream Viola had to resign himself to the rank of taxation, but the defeat was by a narrow margin, and indeed, looking at a map, and excluding the area of ​​Livigno, which belongs to the northern watershed "retico", we have the impression that with a large semi-circle counterclockwise, what we call the Adda valley in its upper region bend its course towards the west and find in Val Viola its source. The valley starts from the hamlet of Arnoga 1800m, and finish to the passo di Val Viola 2455m. Opposite side id the swiss Val da Camp also part of the Livigno Alps. To the Val Viola also belong the valleys; Verva and Dosdè. 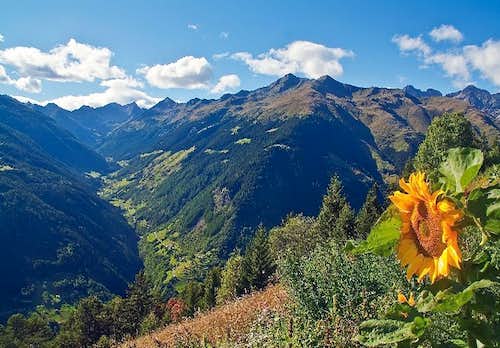 Val Grosina
Val Grosina:
It is located an the southers side of the Livigno Alps and it is divided into two branches: the west called "Val Grosina occidentale" or "Val di Sacco"and the north called also "Val d'Eita". It's one of the few valleys still lived and preserved in their pastoral agricultural character. The care of the slopes and the beauty inherent in the territory make the two branches of the Val Grosina unique and not to be missed, especially to go on foot with a rich possibilities for excursions of all kinds and for all tastes. Scattered throughout are churches, shrines and chapels, a sign of faith tradition, still alive in the present and the real heart of local history.
The starting point for any excursion in Val Grosina is "Fusino" (1203m), reachable from "Grosio" through the convenient road that you take in the middle of the country. Going up, you first pass through the hamlet of "Ravoledo" and then you reach the panoramic church of "San Giacomo". From here you get to see the orographic conformation of the two valleys grosine and leads to the two hydroelectric reservoirs of Fusino.
Val Grosina is tributary of some secondary valleys: Valle Piana, Valle di Avedo, Val Verva and Val Cassavrolo. 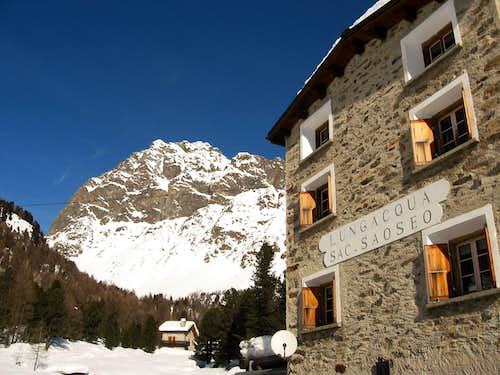 Refuge Saoseo with the Corn da Camp in the background