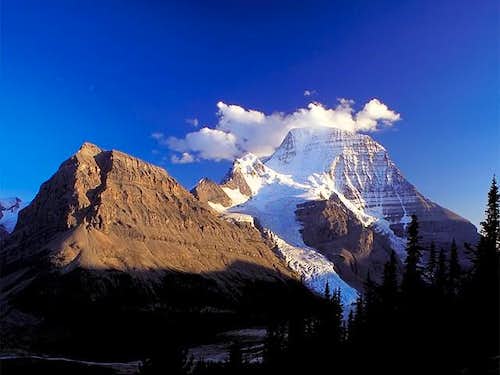 Mount Robson is the highest mountain in the Canadian Rockies. It rises 3000m from the valley floor to the summit. Every aspect of this peak will inspire even the most veteran alpinist to stare at her for a few minutes, in order to feel her power, her beauty and her enticement. The pure intimidation of Mount Robson can send shivers up your spine.

The mountain offers numerous routes. The classic Kain Face, by which Conrad Kain made the first ascent of the mountain guiding 2 friends up the 250m ice face. It required over 700 chopped steps. For the hardcore alpinist the Emperor Face rises 2500m from Berg Lake, offering 1500m of difficult climbing. And for the alpinist seeking a committing route within an attainable difficulty there is the huge North Face route or the exposure of the Emperor Ridge. There is NO non-technical route on this mountain.

Robson earned the nickname "The Great White Fright", it truly is.

[img:249680:alignleft:small:]There are major airports at Edmonton, Calgary and Kamloops with Edmonton probably being the closest to the mountain. From Edmonton head west to Jasper and the north-west along the #16. It's about an hour from Jasper to the Mount Robson Visitors Center.

Bus service is available to the Park.

Note that in recent years many parties (especially guided parties) have been using helicopters to approach climbs on the peak; particularly climbs of the Kain and North Faces. Provincial Park rules allow landings on the Dome and it is done. It is also possible to book flights to Berg Lake.

Obviously, the practice of landing on the Dome is controversial with many climbers. It is the subject of much debate on many message boards.

[img:228175:alignleft:small:]South Face (Normal Route) Grade IV little if any technical climbing - at most very easy class 5. Normally done in three days with a stay at or near the Ralf Forster Hut.

A long route with much objective danger. One of the most popular routes on the peak.

Wishbone Arete Grade IV 5.6. Three days is the usual time. The route goes up the right branch of the wishbone. The gargoyles at the top are normally the crux.

Emperor Ridge Grade V 5.6. Three days is the usual time. Possibly the biggest ridge climb in the Canadian Rockies. A gully on the Emperor Face can be used to bypass the major difficulties at the top.

North Face Grade IV. Three to four days is the usual time. A pure snow and ice climb once on the face proper. Some easy but loose rock on the approach. The difficulty varies with conditions.

Fuhrer Ridge Grade IV 5.4. Three to four days. A rock ridged between the North Face and the Kain Face. Not often climbed, but apparently a very nice route.

Kain Face Grade IV. Three to four days is the usual time. A pure snow and ice climb once on the face proper. This was first ascent route pioneered by Conrad Kain who chopped over six hundred steps on the climb.

[img:251106:alignleft:small:]Registration for climbing is voluntary. For use of camp spots along Berg Lake, trail permits are mandatory. Mountain bikes are allowed only as far as the upper end of Kinney Lake.

Special rules and fees apply to the Berg Lake Trail:

For the South Face route access to the Ralph Forester Hut is first come, first serve.

[img:228174:alignleft:small:]The best months to climb are July and August with the season sometimes extending into September.

Winter ascents have been successful in past years, but require excellent mountaineering skills and top quality, warm gear.

Severe storms are possible all year around and temperatures dropping below -20 degrees C is not uncommon even during the summer months.

James Blench of JB Alpine Services
Excellent guide recommended for Mt. Robson as well as other peaks in the region.
Telephone: (403) 678-2576
jbalpine@telusplanet.net

Author: mtnartman, Date: Sept 14, 2004 03:31 AM
I can add my personal recomendation. Although didn't climb with him as a client, my partner and I climbed with him and his client on Robson's Kain Face and Mt. Logan's east ridge. Absolute pro!

Camping is permitted at designated campsites. There are several on the trail into Berg Lake and then another two at Berg Lake, one in the immediate area as the Berg Lake Shelter (nice to hang out in on rainy days) and another at the NE end of the lake.

The Ralph Forster Hut on the South Face route is first come, first serve and is no charge.

Cabin and Campground accommodations with with panoramic views of Mt Robson www.mountrobsonlodge.com

It is possible to camp anywhere on the mountain, but the steepness of all angles usually result in climbers using the same spots year after year.

It is not yet required on this peak to bag your poop, but it would be nice to see climbers take responsibility for themselves and implement this before it got to a state where it would be required. There are thousands of crevasses a bag of poop could be thrown into. This would be a great first step in keeping the mountain safer for snow melt and a bit more pristine.

The link on the main page to the park doesn't work. Cheers!

Hi You must mean the RF Hut. seem there is no page for it anymore. Thanks I deleted the dead link. Cheers William