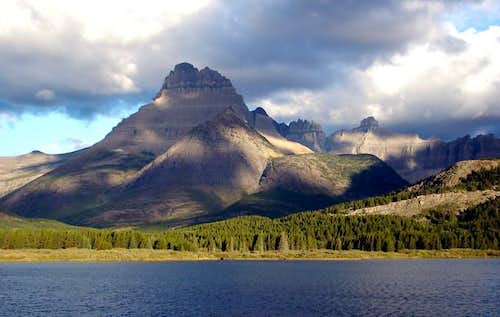 The classic view of Mount Wilbur from the east across Swiftcurrent Lake. Photo by csmcgranahan 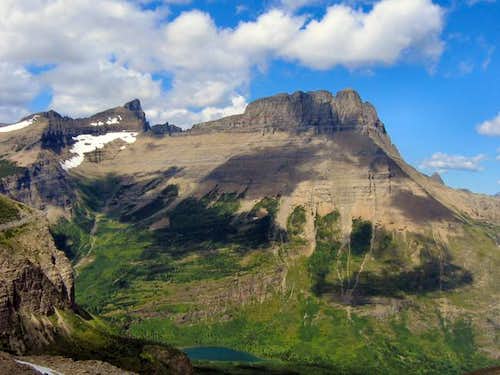 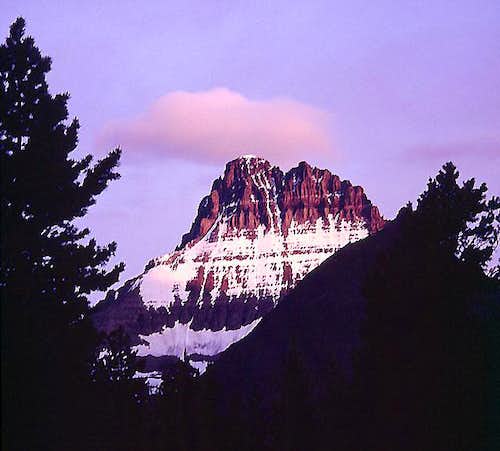 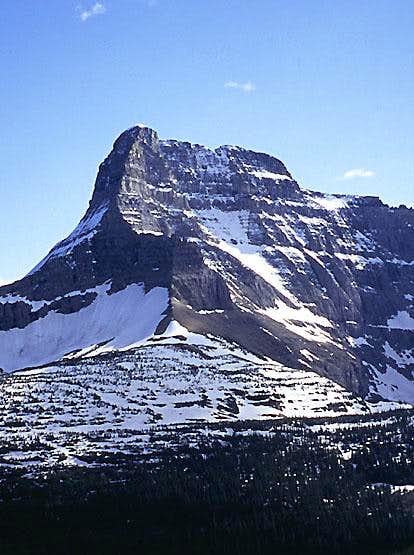 The north face of Mount Wilbur

Viewed from the east, Mount Wilbur appears to be a fantastic freestanding fin of rock. In fact, the mountain has a roughly three-sided pyramid shape with relatively wide north and south faces. A long very jagged west ridge extends behind the impressive east face. There are five described routes on the east face and one on the north face. I do not know if the south face or the west ridge has been climbed.

Mount Wilbur was named in 1885 by G. B. Grinnell , for E. R. Wilbur, one of his partners in the Forest and Stream Publishing Company. Grinnell was one of the pioneers influential in the establishment of Glacier National Park. The mountain was known as "Heavy Shield" by the local Native Americans. The first ascent of Mount Wilbur was made via the East Face (variation unknown) on 20 August 1923 by Norman Clyde. 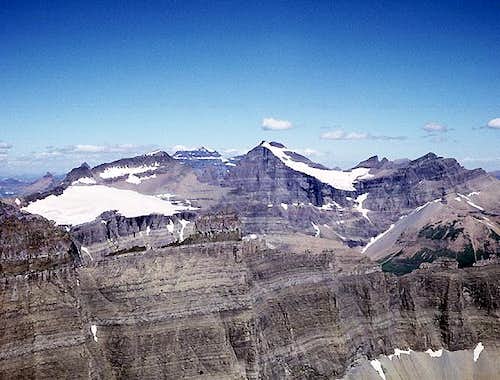 View north from the summit of Mount Wilbur 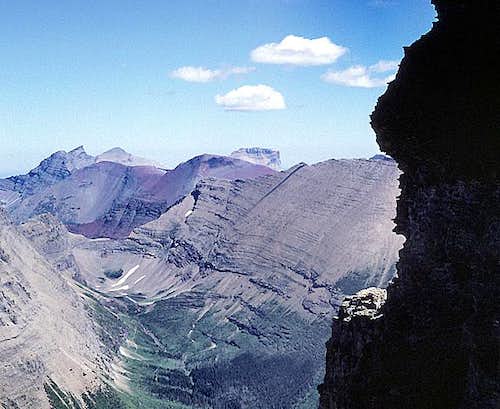 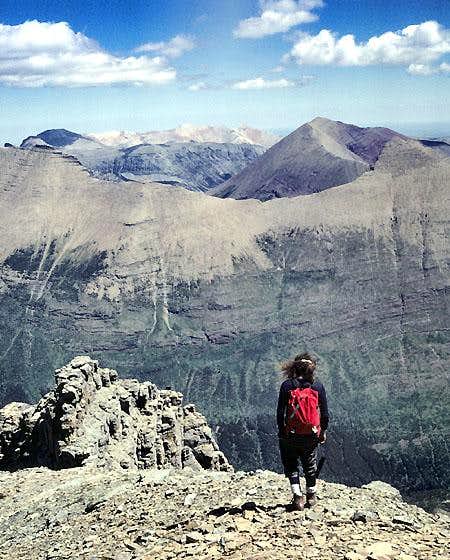 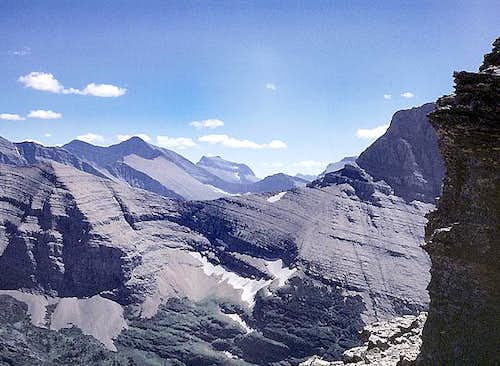 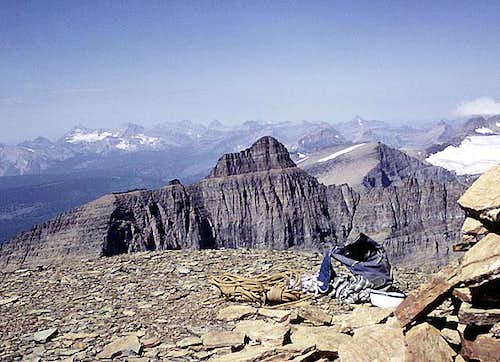 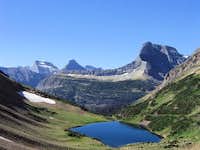 See maps Park map link here : Glacier National Park Home Page Many Glacier Area The road is not maintained for winter travel, but is usually open quite early in the spring. The road status can be checked at: Park Road Info

GUIDEBOOK: A CLIMBER'S GUIDE TO GLACIER NATIONAL PARK; J. Gordon Edwards SPECIAL CONSIDERATIONS: Because of the nature of the rock, there are special considerations regarding climbing in Glacier National Park, and grading systems unique to the Park have been developed. Please see this Fact Sheet for further details: GNP Rock & Grading Systems All the routes described on Mount Wilbur are day climbs involving about 4,500 feet of elevation gain and distance 4 miles, half of this by trail. 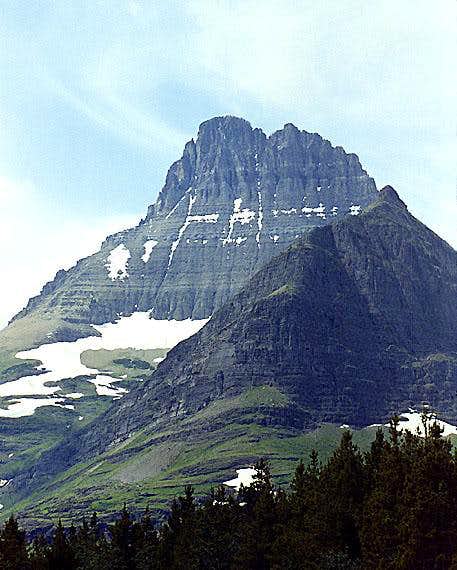 Mount Wilbur from the east.

EAST FACE The East Face routes are accessed via the Red Rock Falls Trail (see Many Glacier Trails Map: Many Glacier Area). There seems to be very little difference in difficulty between the five routes on the east face. All are class 4 and 5 chimney or gully climbs. Only the Thin Man's Pleasure Route has an outstanding feature separating it from the others.

The Direct Route, North Couloir Route, and Central Couloir Route are approached by entering the cirque at the base of the East Face and climbing more or less directly up the north side of deepest gully on the face (below the deepest notch at the top of the face). Some fairly difficult climbing including one overhang is encountered on this lower part of the face.

The three routes diverge at the base of a red rock band where the face steepens. 1) The Direct Route is a chimney climb directly to a notch at the top of the face via the left fork of the main gully. It is described as a straightforward chimney climb with an overhang at the top. 2) The North Couloir Route follows the right fork of the gully and leads via easy class 3 climbing to a more northerly notch at the top of the face. Class 4 climbing is then necessary to traverse to the summit. 3) The Central Couloir Route ascends between the Direct and North Couloir Routes and involves a couple of pitches with dangerously downsloping holds, but is indicated by Edwards to be the easiest of these three routes.

NORTH FACE The Northwest Face Route is accessed from Iceberg Lake (see Many Glacier Trails map: Many Glacier Area). This is described as an extremely difficult climb involving many overhanging chimney pitches. It was first climbed in 1961 by Tom Choate, Renn Fenton, and Gil Averill and was not known to have been repeated as of 1989.

Summer season after most of the snow is gone from the East Face. 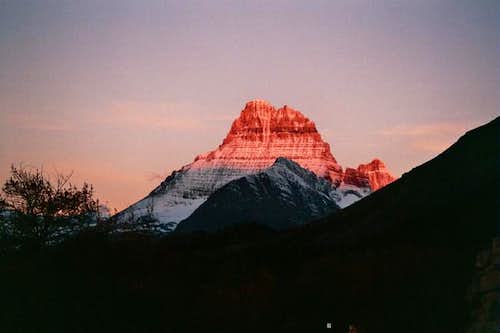 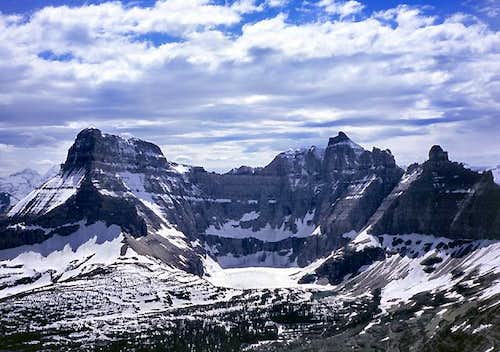 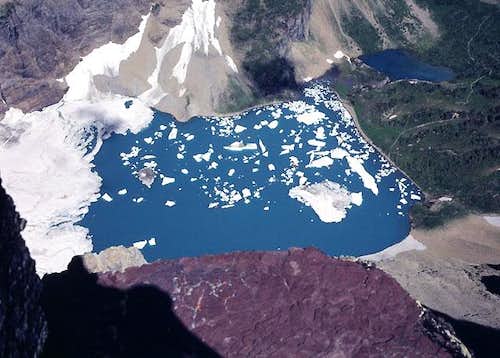 Because of the orientation of the cirque and the exceptionally steep walls, the lake remains frozen until well into the summer and normally contains icebergs most of the summer.

The hike to the lake is mostly through fairly open terrain with fabulous views of Mount Wilbur and Pinnacle Wall. It is about 4.7 miles with 1,200 feet of elevation gain from Many Glacier to the lake. Links: Big Sky Fishing.com - an excellent trail description with many photos (note - there are no fish in Iceberg Lake - it is frozen too much of the year) Trip Report - a private party trip report with some nice photos 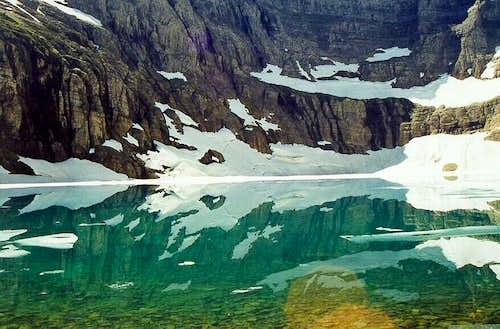 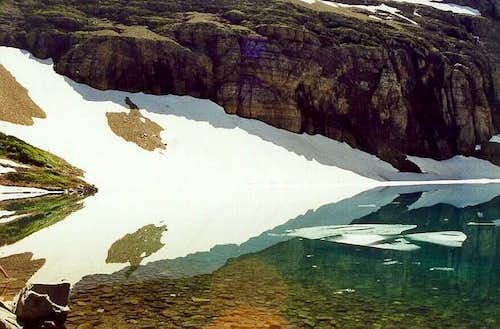 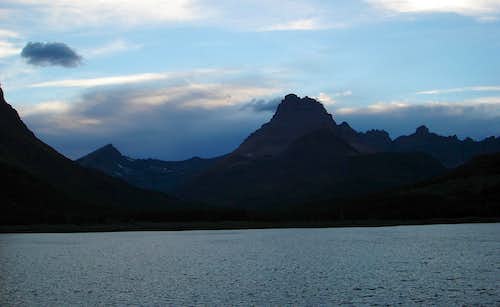