The peaks in the La Sal Mountains are often viewed, but realitively few people climb them. They are the second highest mountain range in Utah, after the Uintas. They form the famous backdrop behind such famous areas as Arches National Park, Canyonlands, and Moab. Less famous, but just as spectacular it the view from the east and near Gateway Colorado. The La Sal means "The Salt" in Spanish and the mountains were named by the Dominguez/Escalante Expedition in 1776. There are two stories about the naming of the La Sals. The first is that they were named because the soils and valleys surrounding the mountains contain salt. The second is that since the Dominguez/Escalante party passed through the area in August, they just couldn't believe the mountains were covered with snow, so they assumed they were covered with salt as are some of the surrounding valleys. Since summer temperatures often soar to 110F or higher in the valleys, the story isn't as far-fetched as it may seem.

Tomasaki is a less visited peak than it’s surrounding neighbors, Manns, Waas to the north and Peale, Tuk to the south. Desite this fact, it is one of the easier peaks in the La Sals to climb. Depending on the direction of approach the hike is relatively easy and is usually combined with other peaks in the north portion of the La Sal’s. 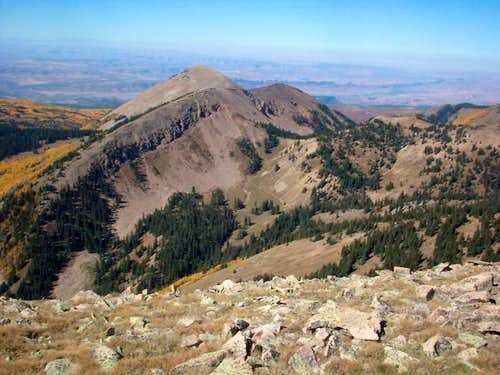 Taken mid way between Manns and Tomasaki. Looking down towards Burro Pass in a west direction.

Drive north out of Moab on U.S. Highway 191 for 2.3 miles. Just before crossing the Colorado River, turn right (east) on Utah Highway 128, which runs right next to the Colorado, with beautiful views of the river as well as the redrock canyon walls. In about 15 1/2 miles, turn right at the signs to Castle Valley and LaSal Loop Road. At 10.7 miles you'll reach a junction. Go straight (east) for another 5 or 6 miles. Turn south onto Castleton-Gateway road (sign). Soon afterward, it starts downhill, and a signed road on the right leads into Beaver Basin. Turn right and stay on the main dirt road. A creek will always be below you to the left.

From the Burger King in Moab, drive SW along Hwy 191 7.4 miles to a junction with the La Sal Loop Road. Drive up the La Sal Loop road for 12 miles, then take a dirt road on the right towards Geyser Pass. In winter, the road is plowed to a plowed parking lot just before the junction with the Gold Basin Road. In summer the road is open all the way to Geyser Pass, and beyond to the trailhead (in summer take a left at the pass and follow the road for about a mile to the trail marked for Burro Pass).R
outes Overview

The easiest route of Tomasaki is from near Geyer Pass. This is also the most practical winter route. From Geyser Pass, the route drives or walkes the road heading west (not south) for about a mile to a fork to the left. This old road, now a pass, heads north to Burro Pass. Once you are west of Tomasaki (there is an old mine here not shown on the map), there are several very minor spurs which can be used to reach the summit. All are steep and have some boulder-hopping.

There are many other route possibilities. One route possibility is from Beaver Basin. This route approaches the summit of Tomasaki from the north and east. Warner Lake is another possible route. Perhaps the shortest and easiest route is from the Geyser Pass Road. This is the best winter route as well.

Mid-June through Spetember and early October is the normal summer climbing season, but the mountain can be climbed year round with the right skills. 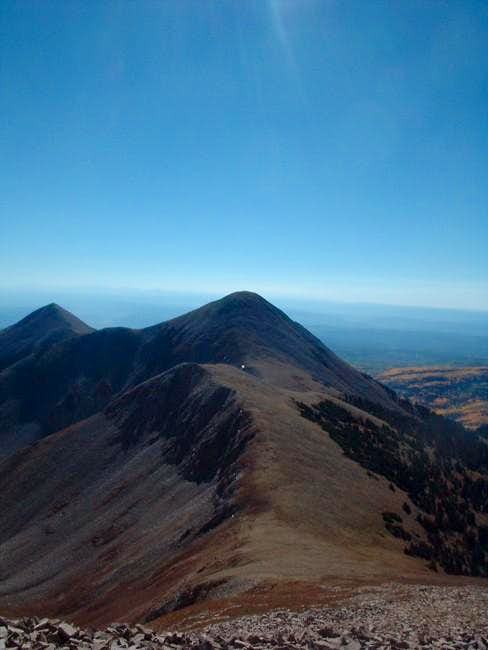 Mt. Tomasaki as seen from Manns in late September.

The peak is located in the Manti-La Sal National Forest. so plenty of camping is avaible.
Campground sites are also located at Warner Lake.