Boarstone Mountain is located on a Nature sanctuary spanning over 1,600 acres owned and Maintained by the Maine Audubon society. The spelling of the mountain can be seen both Boarstone and Borestone. It is a very rugged mountain for its small stature, being that it is just under 2,000'. Boarstones Peak rises steeply from its Mountain lakes, which sit upon about a 50 acre Basin.
The Nature center, owned by the Maine Audubon, lies on a flat 50 acre plot about halfway up the mountain, which used to be a bustling fox farm in the early 1900's, owned by R.T. Moore. Moore was a wealthy adventurer who had a small pontoon plane he would land on midday pond. Just on the edge of the pond lay Moore's cabin, which was his point of escape it is said. Moore used the area to raise his prize winning black fox, whos pelts were said to fetch many thousands of dollars a piece at auctions in New York, staggering numbers at the time. Remnants of fox cages can be seen all over the Mountain, Nestled off of trails and hidden behind trees off of the access road. However the fox Moore raised on the mountain were prize winning black fox, which are of no relation to the fox population that currently inhabits the area.
In 1958 Moore Donated a large section of his property on Boarstone to the National Audobon Society, and eventually after his death donations from both his son and daughter brought the total acreage of the sanctuary to 1,639. In 2000 the National Audubon Society transfered the property into the name of the Maine Audubon.
His lodge, which was built in 1909, was designed by Bangor architect Wilfred E. Mansur and has now been renovated by the Audubon society to an imaculate degree, and can be rented to stay in. On this 50 acre basin lies three ponds; Sunrise, Midday, and Sunset. The peak of Boarstone rises steeply, and provides awesome views, especially for a non-technical climb.

Take Interstate 95 North until you come to the Newport Exit. Get off on the Neweport exit. Once in Newport, get one route 7 heading North. Take 7 through Corinna and into Dover-Foxcroft. When you come to the end of 7, as you roll into Dover-Foxcroft, take a left onto 15, and drive through sangerville. Eventually you will come to a junction where 15 branches of north with 6, and 16 keeps going west, take the 15/6 North. You will come into the Town of Monson, past the lake on your left, and then start looking for the Elliotsville Road on your right. It branches off on the right, after heading through the center of town. You will soon come to a branch in the road, make sure you stay on Elliotsville, veer right, otherwise you will end up on dead end. You stay on Elliotsville basically the rest of the way. Eventually you will come to the juncture of Mountain Road Which will be on your left. Go up the Mountain road, and you should soon cross some train tracks, the parking lot across from the mountain is less than a mile from this point, on your left.

There is virtually no red tape involving this mountain, except for the 4 dollar fee you have to pay at the Nature Center, if you are not an Audubon member.

This trail is a dayhike, featuring an in and out trail of a round trip of about 4 miles. there are no points on the property of the mountain in which you can camp. 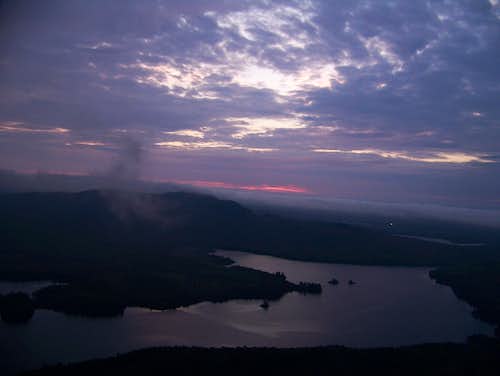 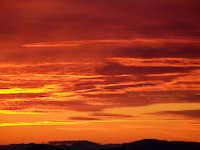 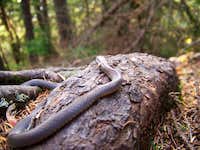 Boarstone Mountain is a Nature Preserve encompassing 1,600 acres of forest and is full of animals to see...Everything from Pine Martin to fox to canadian lynx take up habitat here. The mountain also offers beautiful views from both of its peaks East and west.

[img:488713:alignleft:small:]The trail access sits behind a gate so you must park in the adjacent parking lot. Once inside the gate, you can either choose to take take the trailhead, or walk up the access road which reaches a little over half way up the mountain.
The first half of the actual trail is newer, comparativly speaking to the summit section, so it is not in as good condition. However over the years it has slowly been worked on, including the addition of five or six Rock staircases in the fall of 2007. The mountain has a high content of slate which sits in many sections of the trail itself. When encountering weather of any sort extra caution should be taken as these pieces of slate are extremely slippery and sharp.
If you are looking for a slightly more challenging hike, then take the actual trail the entire way. Either route you do choose, will bring you to a composting toilet, just before you access the trail to the Peak.