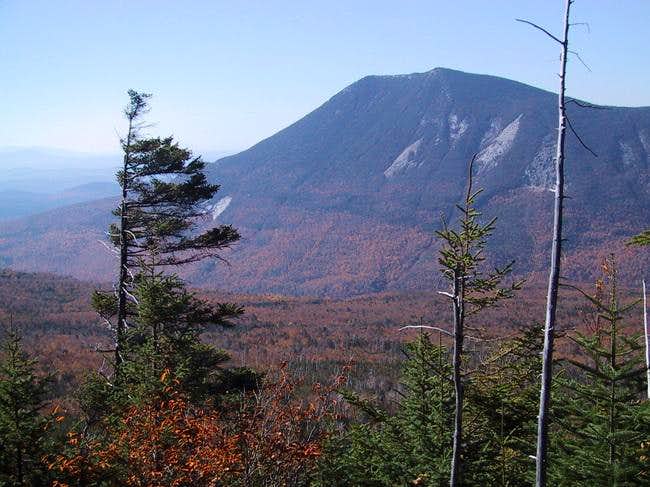 Elevation Gain: 2400 feet
Doubletop's steep sides rise above the west bank of Nesowadnehunk stream and some have been fanciful enough to call it a Maine Fujiyama. From the proper perspective it does give some resemblence to that volcano, but underfoot you will feel solid granite- no volcanic rubble here. The mountain features landslides on the east side above Nesowadnehunk and indeed landslides have come across the stream and dammed it up for a while. To the east across Nesowadnehunk Stream is the fir and spruce covered Mount OJI along with its trailess West Peak. The earliest mention of the mountain that I am aware of is from the time of the Civil War when some folks were avoiding enlisting in the Union army. As they were camped on Nesowadnehunk Stream one of the slides happened on that side of the mountain-no doubt it made much more rumbling than the combined battles of Gettysburg and Antietam. The rise from the Newsowednehunk Stream to the summit is about 30 degrees and the climb from the Squaws Bosom col to the summit is 1000 feet in 3/10 mile.

Drive up from Portland along route 1 and enjoy the coastal scenery and lazy traffic or drive up I 95 in either case reach Bangor( pronounce the last syllable as "ore"). From Bangor drive up I 95 to Meday about 60 miles and take Route 11 west to Millinocket about 12 miles. From there follow the Baxter State Park road to the Togue Pond Gatehouse about 20 miles. Having paid your out of state visitor fee at the gatehouse-between 6:00 a.m. and 6:00 p.m.?, you may drive west along the base of Katahdin to Katahdin Stream Campground, you may then drive about 3 miles west to points along Nesowadnehunk Stream where you might want to cast flies for Brook Trout as you gaze at the mountains. Foster Field at the southeast corner of Doubletop is where you will park your car for the hike in to the South Peak of Doubletop.

Any time of year would be suitable but in winter it would be a somewhat serious undertaking with temperatures reaching -40 degrees F. In the spring snow will cover the trails. Some moderate ice climbs are near the Newsowadnehunk road, along theeast side of Doubletop Mountain. (However, these routes also require crossing Nesowadnehunk Stream.)

You should have reservations for Baxter State Park. Katahdin Stream and Nesowadnehunk field just north of Doubletop are good choices.
TENTING SPACE $6.00 per person per night, minimum $18.00 per tentsite. At TROUT BROOK FARM and NESOWADNEHUNK CAMPGROUNDS there shall be a family rate of $18.00 per site per night. 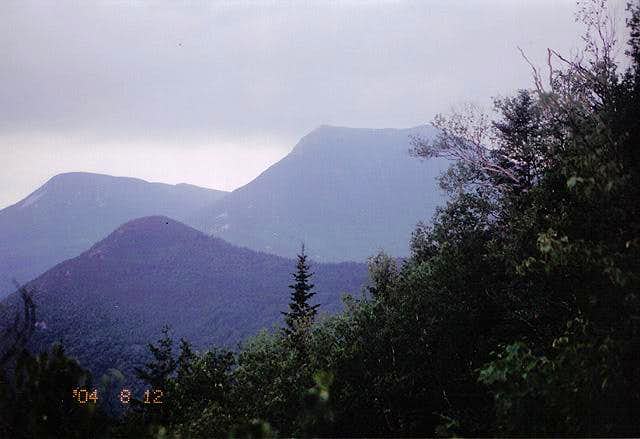 The ascent from Foster Field is about 3 miles and 2500 feet, but it is the last 900 feet in .3 miles that is the kicker before you emerge onto the open slab top. From the north the trail is about 3.5 miles to the north peak. It makes for a 7 mile hike for a tour de Doubletop. Note: on March 25 2005, an attempt was made by single skier who got within 3/4 mile of the top but fell into a 5 foot deep snow well around a spruce. He decided to return.


View from the Top

The south summit is quite open with a spur extending toward the Nesowadnehunk valley and Katahdin. Katahdin rises to the east behind OJI and its west peak, Barren Mtn and The Owl. Oji has prominent steep landslides facing south toward the lakes.
The Hunt Spur is prominent as well as Witherle Ravine which is just to the left of the Hunt Spur (Appalachian Trail). The North peak is open enough to get a good view to the east, west and north as well as the ridge to the south peak. From the south peak looking south, the larger lakes are Pemadumcook and the Jo Mary lakes. Jo-Mary Mtn and White Cap are on the southern horizon. To the west and attached to Doubletop is Squaw's Bosom (may no longer be acceptable nomenclature).
Chesuncook is the large lake 10 miles west of you. Near the westerly part of the mountain which is connected with the Catardin, we could see Chesauncook 1ake extending N. N. E. and S.S.W. about twenty miles long and five miles broad which empties in to the Penobscot; is perhaps the first written reference to Doubletop. This is a quote from Charles Turner Jr. commenting on the view from Katahdin in 1804. To the North there is Nesowadnehunk lake source of the stream of the same name. To the northeast are the Brothers and their long landslides that have dammed Nesowadnehunk Stream more than a century ago. To the far west is Moosehead Lake about 35 miles long. There is a bronze plaque at the summit dedicated by the wife of Kappele Hall (June 10 1872- April 25 1924) only love is eternal

Prominence: 2100 feet. Prominence is the difference between the summit elevation and the lowest contour surrounding the peak in question and which surrounds no higher peak than the one in question.

Whereas, on March 3, 1931, the former Governor Percival P. Baxter deeded to the State of Maine 5960 acres of land, which included Mount Katahdin….
Whereas, in the 31 years that followed, Governor Baxter acquired an additional
195, 058 acres which were given to the people of Maine….
Whereas, during his lifetime he donated over $1,500,000 to maintain this land and, on his death, he left the bulk of his estate, a trust of over $10,000,000 to forever assist in maintaining the park, and to assure that it shall forever be kept in the natural wild state;” and whereas, the acquisition and deeding to the State of over 200,00 acres was an achievement unparalleled by any individual in the United States:…

Two days ago I tried to get a shot of Doubletop from the south (nice and pointy from that angle), but the exposure was all wrong.

PS check the HTML in the Weather section - I think you have an extra > and a line break before the ALT.