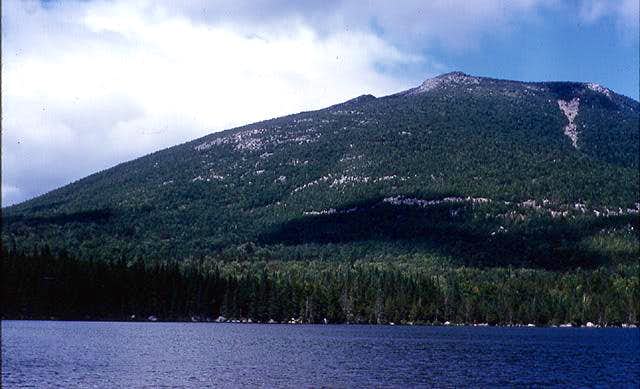 The three peaks of Turner Mountain are to the immediate east of Katahdin and the valley of the south branch of Wassataquoik Stream. The trailess north peak overlooking Wassataquoik Stream is 3323 ft. high, the popular South peak is 3123 feet (The U.S. geodetic survey says 3130 feet) and the trailess East Peak which is hard to get to is 2441 feet and is in the realm of the County highpointers. The East peak exceeds Mt. Chase by 1 foot and thus is a challenge to those seeking the high point of Penobscot County Maine. The North and South Peaks are in Piscataquis county. The South Peak is served by a trail that ascends from Sandy Stream Pond and is accessible to anyone with a good set of lungs and determination. The North and South peaks are two miles apart and separated by a deep saddle. The open South peak offers superb views of Ktaadn and Baxter Park. In July of 1965, I recall the tragedy of the two small Mott children who were camping at Roaring Brook. The five year old who was diabetic and the 3 year old disapeared into the forest. The parents and the rangers searched to no avail. Many came and eventually searched the slopes of Turner Mountain (I later talked some of the searchers). After a long time, maybe years, their bodies were found not far from the campground. The east side of Turner contains a rather well developed glacial cirque which is a bit unusual considering its height. It is not visible from the park.

Drive up from Portland along route 1 and enjoy the coastal scenery and lazy traffic or drive up I 95 in either case reach Bangor( pronounce the last syllable as "ore"). From Bangor drive up I 95 to Meday about 60 miles and take Route 11 west to Millinocket about 12 miles. From there follow the Baxter State Park road to the Togue Pond Gatehouse about 20 miles. Having paid your out of state visitor fee at the gatehouse-between 6:00 a.m. and 6:00 p.m.?, you then turn right and northeast and drive along the base of Ktaadn for 8 miles on a gravel road (15mph) until you reach Roaring Brook with its tenting and leanto sites. When hiking leave your destination at the Rangers Station as a courtesy to those who would search and attempt you rescue. Follow the trail northeast from the Ranger's station toward Sandy Stream Pond. Admire the view of Turner, Moose and/or fly fish for trout in the pond. Having procrastinated in this manner. walk up Turner reaching a boulder field right away after Sandy Stream Pond. Ascend the mountain steeply and come to the summit area. Will require some scrambling-sort of class 3 and the summit is yours after gaining about 1700 feet. Distance from ranger station to South Turner Summit-2 miles.

Winter time is difficult in Baxter Park. Snowshoes or skis would be the order of the day and a permit and party size limitations would be required. During the summer, this is a nice afternoon hike and is a good alternative to Katahdin if you get to Roaring Brook too late to hike Katahdin.

Another reason to climb Turner.


Where to view Tuner

From the Penobscot where I-95 crosses and route 11 up the East Branch.
Also from Ambajejus and Millinocket Lakes. From Katahdin and Katahdin Lake
Sandy Stream Pond, Russell Pond and Traveler Mtn.

Prominence: 1723 feet. Prominence is the difference between the summit elevation and the lowest countour surrounding the peak in question and which surrounds no higher peak than the one in question. The key col is Whidden Pond just west of Turner Mountain