These two summits both break the 10,000 foot mark but are overshadowed by nearby 11,000 foot Box Elder Peak. Luckily, a trail passes right between them making for easy off trail scrambles...once you climb the 3,000 foot vertical to the saddle between them. The second half of the Box Elder Trail 044 is quite dramatic, as good as anything on Mt. Timpanogos. Even with the trails, I doubt this area of the Lone Peak Wilderness gets much use. 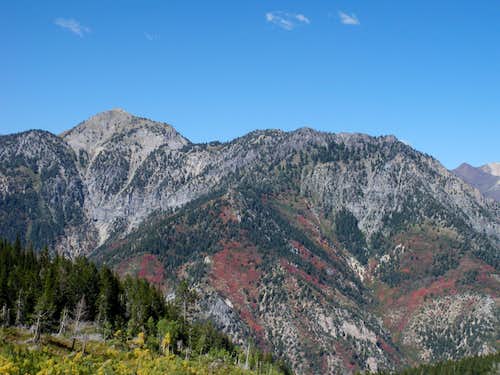 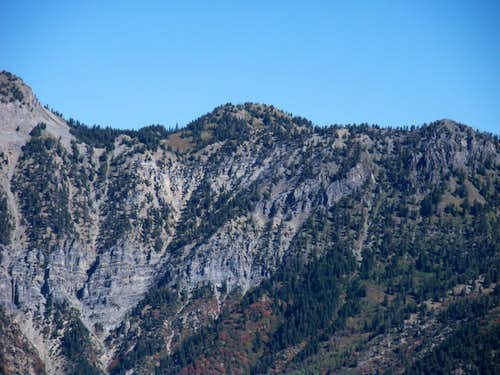 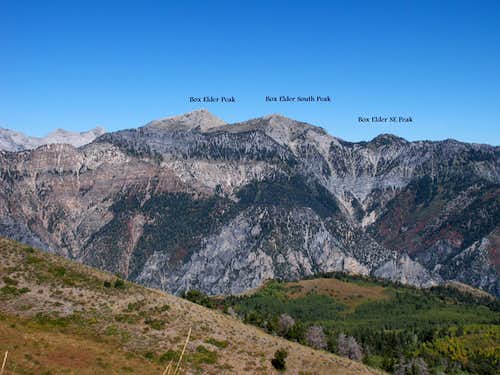 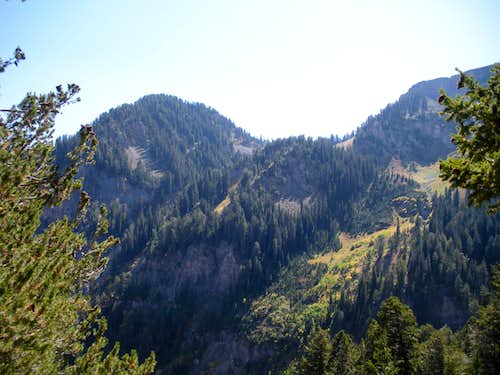 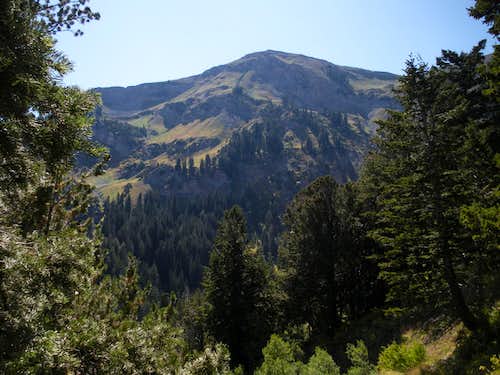 Exit Interstate 15 on exit 287 and head East towards Alpine on SR 92 for 8 miles to the mouth of American Fork Canyon. Continue 0.5 miles to the fee Station and another 4.7 miles to a Y. Take the left onto SR 144 (North Fork). Drive this road north for 2 miles to Tibble Fork Reservoir. Just past the reservoir is a sharp left hand turn, go left and continue ahead for ¾ mile to the campground. Enter the camp, proceed past one or two trailheads until you see a sign for Box Elder Trail 044 (just after crossing a creek on a small bridge). There will be several parking spots before a (locked) gate for a picnic area/group camp. 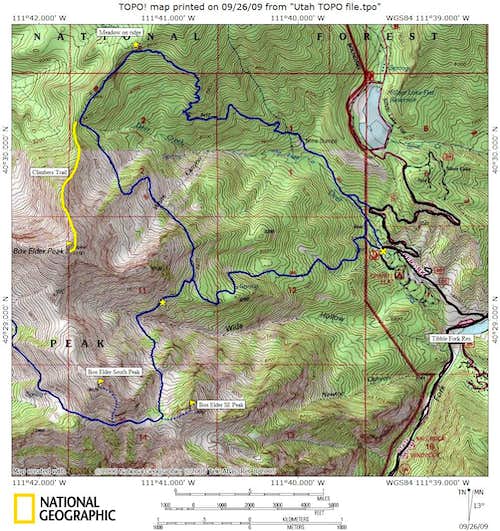 Look for a sign at the far end of the picnic area. After a few minutes walking you enter the Lone Peak Wilderness and an unsigned trail merges in from the right. This trail follows the wilderness boundary connecting to other trails north. The next mile plus is really boring through forests. At times, the trail seemed really steep to me. An interesting old shelter is passed on the left just before a final trail split. A large loop can be made going right along the east side of Box Elder Peak reaching the north ridge and back down to the campground. I ran into several hunters doing this. Go left instead, following the sign for Box Elder Trail 044. Not to far further (shown as a star on the map) is where the trail now becomes very nice. The alpine terrain has huge open slopes with a few massive ravine/washes. Follow the trail through all this up to a pass at 9,700 feet. At the pass the trail splits. Left is a quick 350 foot climb to the Box Elder SE Peak. Game trails will lead most of the way up the ridgeline. For the better summit, turn right at the pass following the main trail as it drops down a bit into meadows. Continue following west as it drops a bit to a boulder field then climbs up to a rib coming south from the summit. Once on the rib and past the cliffs you've been hiking under, you can climb steeply north up to the summit ridge. On the ridge it's easy walking to the summit. 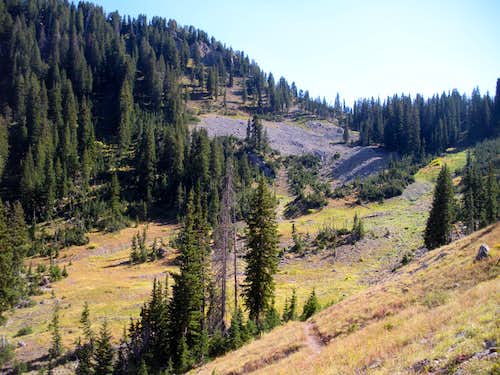 Pass between the peaks 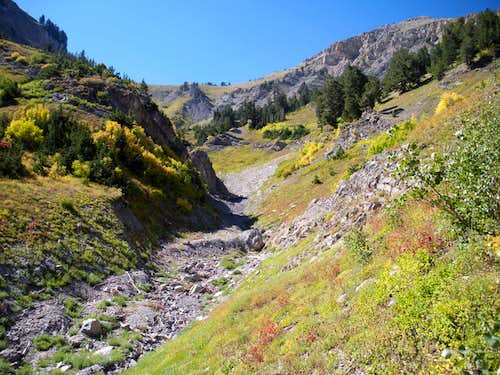 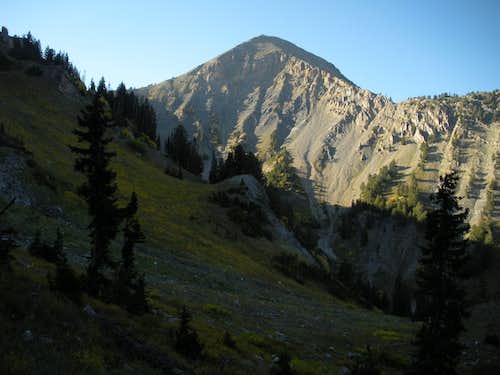 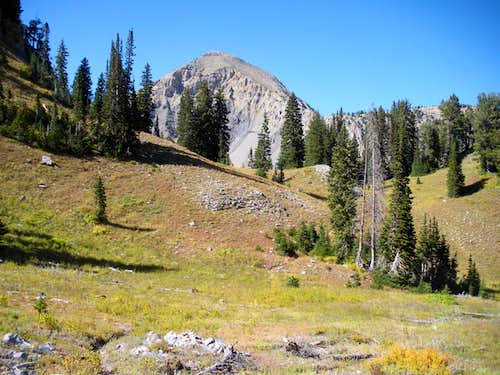 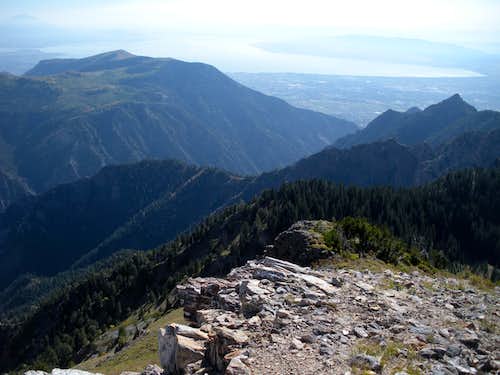 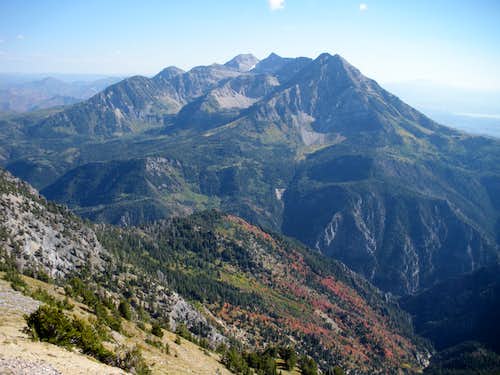 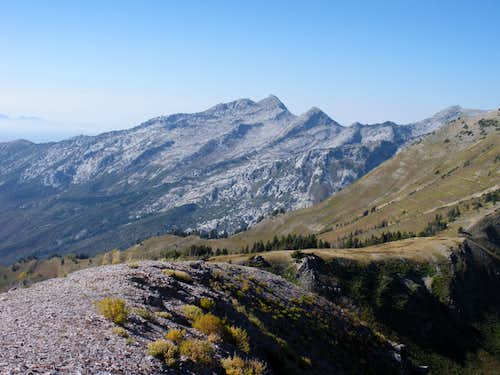 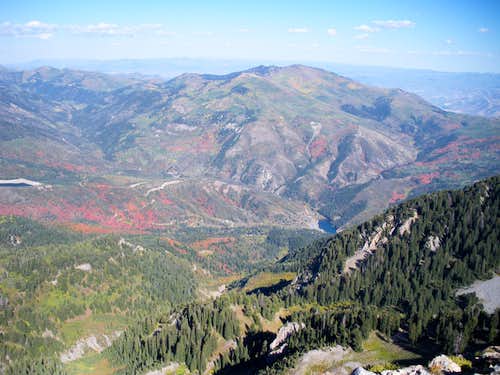