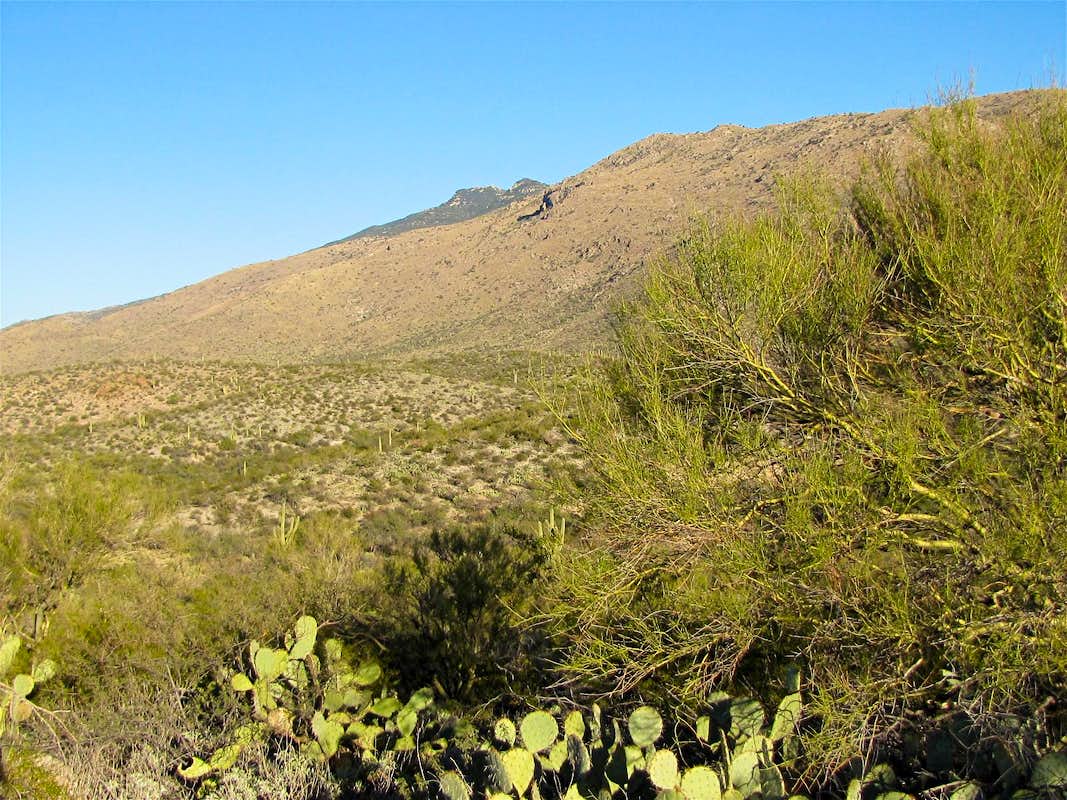 Tanque Verde Peak is usually climbed via Tanque Verde Trail, a well-established trail that starts near the city of Tucson and follows the ridge-top to Tanque Verde Peak and Cow Head Saddle where it intersects other local trails. A hike to the summit of Tanque Verde Peak requires an 18 mile roundtrip with 4000 ft of net elevation gain. The hike starts in a Sonoran Desert Cactus Forest. At higher elevations, the environment changes to grassland with scattered small trees. A forest of Juniper trees covers the highest slopes of the ridgeline. The trail provides the hiker with magnificent views of the city of Tucson and its nearby mountains.

The summit of Tanque Verde Peak is made of a large boulder that requires class III climbing. The views from the top of the boulder are superb (but very limited from the base of the boulder).

The eastern district of Saguaro National Park is accessed via Old Spanish Road in eastern Tucson. Once on the park road, make a right turn at the first and then the second intersections to reach the Tanque Verde Trailhead.


The trail is generally easy to follow. In some places, however, you will have to look for cairns.

Below 4500 ft, you find yourself in a Cactus Forest. The highest Saguaro Cactus that I saw sat at an elevation of 4900 ft. In this part, the trail goes up the slopes steadily.

Views of Tucson and Nearby Mountains from the Trail:

Although some of the smaller cacti can be found all the way to the top of the ridgeline, most Giant Saguaros go away at an elevation of 4500 ft. The environment changes to grassland with scattered trees. As you go higher, the trees become more abundant. Most of the trail’s ups and downs happen in this section. In some places (over slickrock or overgrown areas) you must look for cairns to find the trail.

At 6000 ft, you will reach Juniper Basin where there is a designated camp site (see Red Tape section). You will find yourself surrounded by a forest. The trail goes flat for some time before it begins the final ascent to the summit.

As you near the Tanque Verde Peak, the summit of the peak finally comes to view.

Near the top of the Tanque Verde Peak, a sign guides you to a spur trail that goes to the base of the summit boulder (the main trail goes downhill to reach Cow Head Saddle). At the base of the boulder, you will have limited views. The boulder is probably less than 2 stories tall. You must do Class III climbing to reach its top.


Views From the Top of the Tanque Verde Peak:

You must pay park entrance fee. Camping is allowed in Juniper Basin but requires a permit.

For all rules and regulations, see the site for Saguro National Park.