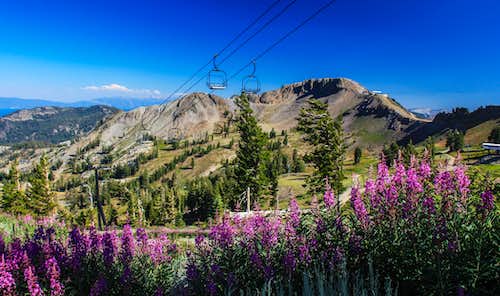 Olympic Valley Peak is the prominent flat top mountain at the top of the Palisades Tahoe Ski Resort northwest of Lake Tahoe.

Although commonly known as "Squaw Peak", I am referring to this mountain as Olympic Valley Peak given efforts to remove the derogatory term "Squaw" from many mountain summits across the U.S. and the fact that the mountain rises above Olympic Valley, California.

The name "Squaw Peak" comes from the Squaw Valley Ski Resort which has since changed its name to the Palisades Tahoe Ski Resort.

The peak was possibly as high as 9,000', but the summit area was leveled by the FAA in the 1960's to install a radio range for airline navigation. The north face chutes known as "The Palisades" drop off precipitously for advanced skiers.

The ski resort is located in Olympic Valley, California - where skiing competitions were held during the 1960 Winter Olympics.

Although the area is fairly developed, with a restaurant at the base of the mountain, the views are still excellent.

To the south the Desolation Wilderness Peaks grace the horizon. There is a bird's eye view down to the High Camp area and Olympic Valley as well as Lake Tahoe beyond. To the north is Granite Chief, Tinker Knob and others. West is the Mildred Ridge and Mildred Peak above French Meadows; all in the Tahoe National Forest. 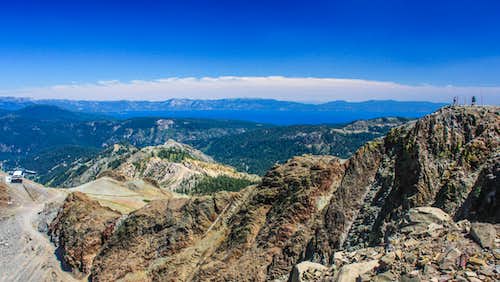 From Truckee or Reno, take Interstate 80 to CA State Route 89 going south.  If approaching from Tahoe City drive 8.5 miles north to the junction with the main road into the resort, which is named Olympic Valley Road. Follow westward for a couple miles until just before you enter the village of Olympic Valley. Take a left and head towards a large parking lot east of the Red Wolf Lodge.

For the Five Lakes Trail, it is 10 miles south of I-80 and about 1.5 miles south of the entrance to Olympic Valley. It is about 3 ½ miles north of Tahoe City if coming from Lake Tahoe. The Five Lakes Trail is about 2 miles up the road, across the street from Deer Park Drive. There are usually lots of cars on the side of the road near the trailhead. 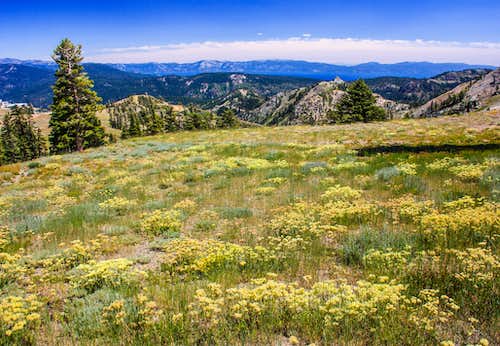 Toward Lake Tahoe from the Siberia Ridge Road

From the Valley floor at the village: Go into the village to the left (south) side of the tram building and take the Thunder Mountain Trail about 2 miles up to the 2nd crossing of the Summer Road. Go a short distance on the Summer Road and take the Headwall Road to the left as it curves up and to the right below the summit. At the crest go left on the Siberia Ridge Road which goes around the back of the peak and up to the top. (2,850' gain).  It is about five miles to the summit.

Once on the summit, continue for about 1 1/2 miles along the ridge.  At this point you can continue on the road, which easily reaches the summit in about another half mile; or take a fun steep trail about 1/4 mile to the summit with a ladder to help you up the rockiest section.  It is a five-mile hike to the summit via this route with a one-way elevation gain of 3,300' to reach both summits.

From High Camp: Take the Siberia Ridge Road 1.9 miles to the top of Olympic Valley Peak. (844' gain).  You can also head south up towards the east ridge and hike up the trail and ladder with similar hiking distance and elevation gain. The easiest approach is by taking the tram from the village up to High Camp. This shortens the hike by about 3 miles and 2,000' of gain.

From Five Lakes: The Five Lakes Trail offers probably the shortest route to Olympic Valley Peak without having to take a tram.  Continue up the trail passing under KT-22.  After about 1.6 miles you can reach the east ridge of Olympic Valley Peak by hiking off-trail for about 250 yards and gaining about 150' to reach the ridge.  From there, it is about 1 1/4 miles to the summit if using the trail/ladder route, or 1 1/2 miles if using the road.  Total elevation gain is less than 2,400'.  You can add KT-22 with a mile round-trip gaining less than 400'.  That would make the entire hike about 7-7.5 miles round trip with 2,750' of elevation gain.

There are no permits required for day hikes. From tram prices and schedules click here.

Technically, you can reach Olympic Valley Peak any time of year.  However, if you go during the winter and springtime, bring your skis.  If wanting to hike outside of ski season, May through October are the best times to hike.  To avoid snow, probably come out in late June.  Recent fires have made conditions difficult in August and September due to smoke and haze.  Check fire conditions before coming out during those months.  September is usually ideal if there isn't smoke. 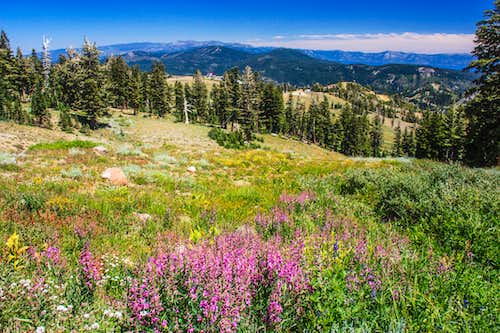 Toward Lake Tahoe from the Siberia Ridge Road