"Cerro 500" is an informal name for the third tallest highpoint on Isla Culebra, Puerto Rico. Apparently, the peak does not have an official name, so I'm calling it Cerro 500 as it appears to be a little past the 500 foot mark in elevation (really it's a mountain of your mind, so you may call it anything that appeals to you). Cerro 500 is located roughly in the north central part of Isla Culebra. It is located directly west of Isla Culebra's highpoint Monte Resaca (195m/640ft). Both Cerro 500 and Monte Resaca are located in the Culebra National Wildlife Refuge (CNWR). Hey, 6000 meter alpine style it's not, but for the altitude enthusiast "trapped" on a very cool little island with beautiful beaches, the very short hike helps gives one a sense of place and an elevation goal. Currently there appears to be little peak hiking information on the internet regarding any of three most prominent peaks on Ilsa Culebra (Monte Resaca (195m/640ft), Cerro Balcón (165 m/541 ft and privately owned) and Cerro 500 so I'm including all research I found here for your perusal and possible geographic benefit.

A little about the area:
Isla Culebra is the eastern most island of the Virgin Islands of the Caribbean. From 1939-1975 parts of the island were used as a bombing range by the U.S. Navy. As a result there may be unexploded ordinance in some areas of off-trail hiking.
Per the U.S. Fish Wildlife Service information sheet on CNWR:
The area of Mt. Resaca forest represents the original flora encountered in Culebra hundreds of years ago. Large boulders, pitch apples and wild banyan trees shade the orchids and bromeliads found in the forest. Mt. Resaca is home to the endemic and endangered plants, Peperomia wheeleri and the cactus Leptocereus grantianus, and was once home to the Culebra giant anole (Anolis roosevelti); last seen in 1932. The endangered Virgin Islands tree boa also utilizes the forests of Mt. Resaca.

Per the U.S. Fish and Wildlife Service fact sheet:
Mount Resaca contains the largest remaining forest of Culebra island, an area of rock-strewn canyons and ravines forming a unique habitat known as the boulder forest.

Get yourself to the Isla Culebra airport. From the airport, take road 250 heading east. Take the first left on Calle Resaca (this is the same paved road that goes to the Playa Resaca trail head). Follow Calle Resaca north all the way to the end. From the airport the distance to the end of the road is about a mile. Note this road is steep in a couple of spots, but a golf cart rental can probably make it without issue. There is enough parking at the end of the road for several cars. Look to the east for the locked gate. This is the start of the very short hike. 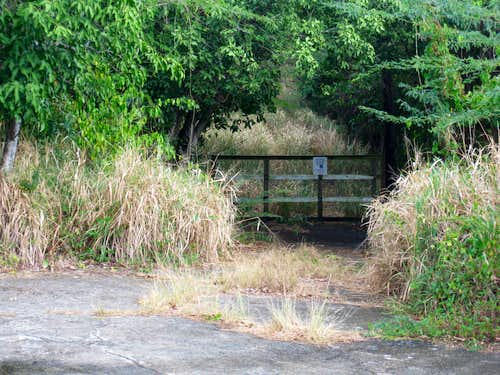 Parts of the CNWR may be closed to the public because of their sensitive nature or unexploded military bombs. Currently the short road/trail to the summit of Cerro 500 appears closed to public access.

From the parking lot/locked gate it's about a five minute hike on old paved road that has been seriously grown over by tall, tropical grasses and plants. Not to worry, the road is very passable and obvious. The top of Cerro 500 has the remains of an old concrete building of some sort that looks like it has been torn down in the last few years.

The View? Not bad, but limited. From the summit one can see a partial view of the ocean to the north, the cell tower and Ensenada Honda to the south and Monte Resaca summit to the east. 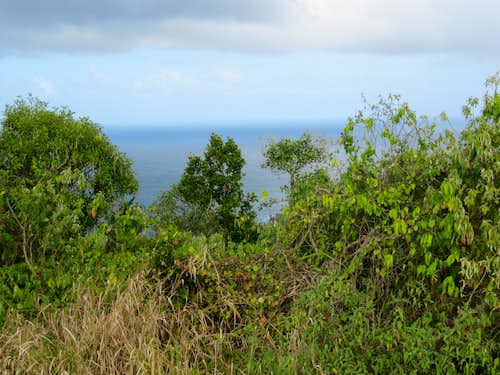 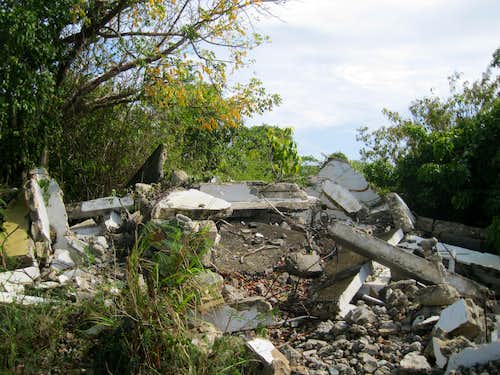 
This Cerro 500 beta really started as an investigation into finding a feasible way to the top of Monte Resaca. According to peakbagger.com's list of Caribbean island highpoints, Monte Resaca is the 36th highest island highpoint in the Caribbean. Currently there do not appear to be any known, established hiking trails to the top of Monte Resaca. I took a cursory look around the summit area of Cerro 500 and there did not appear to be any trails or tracks over to Monte Resaca. I didn't see visible tracks or roads on the satellite views of Google Maps either. It's possible that there might be some kind of old track or game trail from the top of Cerro 500, but the terrain over to Monte Resaca looked pretty thick and seemed to look like an epic bushwack (e.g. machetes, power tools, GPS and blood, sweat and tears). If there was once a trail over to the Monte Resaca summit it has  probably grown over with time. This part of island seems to get a lot of rain/clouds coming in from the ocean so the plant growth seems pretty thick and fast. I'm guessing that the U.S. Fish and Wildlife Service wants to discourage people from hiking anywhere in this part of the CNWR (speculation). UPDATE: McMaster's December 2015 Ascent Trip Report on Peakbagger. Cowabunga! 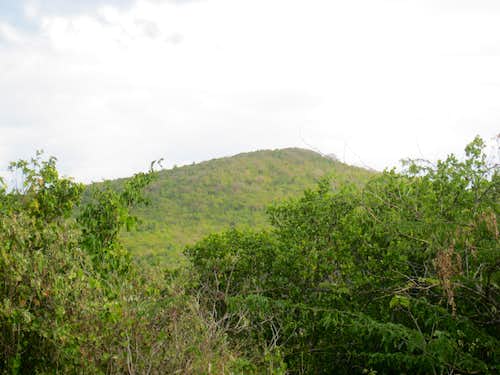 Also, Google Maps indicates that Calle Resaca (on Google Maps as Cll Resaca) has another section that has a lower loop to the east in addition to the dead-end road mentioned above. I'm guessing that this lower loop road has more residences on it. I'm speculate that it's possible that this loop section might have a trail to the Monte Resaca or one that get's you closer to the summit than Cerro 500 (sort of a local's secret trail?). I wasn't aware of this loop road on my visit and I didn't see it (granted I wasn't looking for it either). This might be a task for the next Cerro 500 explorer. If you go and find something useful and feel motivated, you can add it to this page in the comments/additions section here on Summitpost.

Resaca is translated from Spanish to English as undercurrent or hangover (the perfect toponym depending your mood or weltanschauung.. you choose!). Speaking of hangovers, Cerro 500 is ideal for a Rum Dog sneak peak bag or that penance hike for the dealing with the horrid aftermath of a night of pigs feet and pints at El Batey.
Culebra is translated from Spanish to English as snake.

A Real Bed, ¿es posible?:
The word on the street (or was that the beach?) was that Casa Resaca was a nice place to stay (and is within walking distance of the Cerro 500 trail head ~1/4 mile)

Further reading:
Interesting, informative, enjoyable, funny, nostalgic and sentimental reading about Ilsa Culebra in 1970s (something for everyone, this book.."she does it all"):
Islands Under Fire: The Improbable Quest to Save the Corals of Puerto Rico