Maryland is part of six provinces: (1) the Atlantic Continental Shelf Province, (2) the Coastal Plain Province, (3) the Piedmont Plateau Province, (4) the Blue Ridge Province, (5) the Ridge and Valley Province, and (6) the Appalachian Plateaus Provinces.

The provinces that relate to the mountains of Maryland are from east to west, the Piedmont Plateau Province,Blue Ridge Province, Ridge and Valley Province and the Appalachian Plateaus Province.

The Piedmont Plateau Province is composed of hard, crystalline igneous and metamorphic rocks and extends from the inner edge of the Coastal Plain westward to Catoctin Mountain, the eastern boundary of the Blue Ridge Province.

Unlike the Coastal Plain and Piedmont Plateau Provinces, the Blue Ridge, Ridge and Valley, and Appalachian Plateaus Provinces are underlain mainly by folded and faulted sedimentary rocks. The rocks of the Blue Ridge Province (Catoctin Mt) in western Frederick County are exposed in a large fold that in Maryland is represented by Catoctin Mountain. This ridge is formed by quartzite, a rock which is very resistant to the attack of weathering and erosion.

The Ridge and Valley Province between South Mountain in Washington County and Dans Mountain in western Allegany County contains strongly folded and faulted sedimentary rocks. In the eastern part of the region, a wide, open valley called the Great Valley, or in Maryland, the Hagerstown Valley, is formed on Cambrian and Ordovician limestone and dolomite. West of Powell Mountain, a more rugged terrain has developed upon shale and sandstone bedrock which ranges in age from Silurian to Mississippian. Some of the valleys in this region are underlain by Silurian and Devonian limestones.

The Appalachian Plateaus Province includes that part of Allegany County west of Dans Mountain and all of Garrett County, the westernmost county in Maryland. The bedrock of this region consists principally of gently folded shale, siltstone, and sandstone.

The Appalachian Mountains are a vast system of mountains in eastern North America. The range is mostly located in the United States but extends into southeastern Canada. The system is divided into a series of ranges, with the individual mountains averaging around 3,000 ft (900 m). The whole system may be divided into three great sections: the Northern, from the Canadian province of Newfoundland and Labrador to the Hudson River; the Central, from the Hudson Valley of New York to that of New River (Great Kanawha), in Virginia and West Virginia; and the Southern, from New River south. The central section that includes Maryland, comprises, besides various minor groups, the Valley Ridges between the Allegheny Front of the Allegheny Plateau and the Great Appalachian Valley. 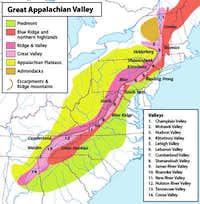 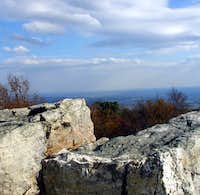 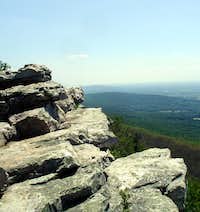 The Blue Ridge Mountains, rising in southern Pennsylvania and there known as South Mountain, attain in that state an elevation of about 2,000 ft.; southward to the Potomac its altitudes diminish. The actual Blue Ridge continues south breiefly into West Virginia, then Virginia, and North Carolina. More about the southern part of the ridge can be found here.

Although the term "Blue Ridge" is sometimes applied exclusively to the eastern edge or front range of the Appalachian Mountains, the geological definition of the Blue Ridge province extends westward to the Ridge and Valley area, The Blue Ridge extends north into Pennsylvania as South Mountain. While South Mountain dwindles to mere hills between Gettysburg and Harrisburg. Most of the rocks that form the Blue Ridge Mountains are ancient granitic charnockites, metamorphosed volcanic formations, and sedimentary limestones.

The mountains in Maryland that make up the Blue Ridge are Catoctin Mountain and South Mountain.

South Mountain also has many "sub-summits" such as High Rock, Raven Rock, Black Rock, Annapolis Rock, Monument Knob, Lambs KnollWeverton Cliff, and Maryland Heights. Maryland heights is technically part of Elk Ridge and is seperated from South Mountain by what is called Pleasant Valley. South Mountain is also home to the Maryland section of the Appalachian Trail. 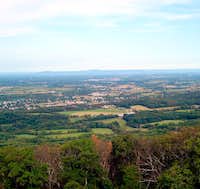 Looking west across the Great Valley from Monument Knob 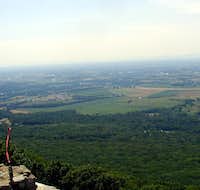 The Great Valley looking towards the Ridge and Valley system

The Cumberland Valley or Great Valley is a geographic region that lies between South Mountain and the Ridge and Valley Province of central Pennsylvania and western Maryland. The valley lies almost entirely within Cumberland and Franklin counties in Pennsylvania and Washington County, Maryland. It is bound to the northeast by the Susquehanna River, and its southern terminus is the Potomac River.

The Ridge-and-Valley Appalachians, are a belt within the Appalachian Mountains extending from northern New Jersey westward into Pennsylvania and southward into Maryland, West Virginia, Virginia, Tennessee, and Alabama. They form a broad arc between the Blue Ridge Mountains and the Appalachian Plateau. They are characterized by long ridges, with long valleys in between. From a great enough altitude, they look almost like corduroy.

Looking Southeast at Sugarloaf from the Blue Ridge of Catoctin Mountain

Sugarloaf Mountain is a monadnock, a mountain that remains after the erosion of it's surrounding land. Sugarloaf is found near the border of Frederick and Montgomery Counties and is really the only mountain found along the Piedmont Plateau Province.

A quirk of Maryland's geography is that the state contains no natural lakes.During the last Ice Age, glaciers did not reach as far south as Maryland, and therefore did not carve out deep natural lakes as exist in northern states. There are numerous man-made lakes, the largest being Deep Creek Lake, a reservoir in Garrett County. The lack of glacial history also accounts for Maryland's soil, which is more sandy and muddy than the rocky soils of New England.

Maryland is also known as the "Narrowest State" since its width near the city of Hancock is roughly 1 mile, between Pennsylvania and West Virginia.

Marylands 50 Highest Mountains can be found on this list.