Summit "Never Forget" flag
Mount POW/MIA doesn't get many visitors. Still, with a serviceable trail to get you past brushline, a beautiful tundra ridge, good southern exposure for early season action, grandstand views of one of the finest sections of Chugach State Park--and all this just 30 minutes from Anchorage--it deserves much more attention. An investment of half a day or an evening is well rewarded.

This mountain was formally named by the US Board of Geographic Names in 1999, honoring US servicemen who became prisoners of war or missing in action. The designation of this peak as a memorial was the culmination of a 20-year campaign by John Morrissey of New Jersey. Morrissey himself served with the Marines in Vietnam, was wounded three times, and had eight comrades who went MIA.

Follow the Glenn Highway (Alaska Highway 1) north from Anchorage to the Eklutna Exit at Mile 26.

Parking for the regular route is 4.5 miles up the Eklutna Lake road, described in more detail below. There are, in fact, two starting points to this trail. One is right above the westbound 35 miles per hour sign: scramble up the grassy bank and look for a footway entering the woods, hopefully marked by surveyor's tape. The first 200 vertical feet of this path are very steep, at about a 50% (1 in 2) grade. The other entry is about 50 yards east, right above the eastbound curve warning sign. Again, a bit of orange tape marks the path, which climbs straight up the mountain at maybe a 45% grade.

The two paths soon converge in a large, elongated meadow that's not so steep. If you lose the path in the meadow, you'll find it again at the far end, where it exits the meadow into the main gully heading up the drainage. Climb this through dense alders for about a quarter of a mile until you emerge into a bowl at treeline, about 2500 feet elevation. Here, bear right (southward) up steep tundra to gain the southwest shoulder of the mountain, which is followed to the summit ridge. It's grassy all the way to the top--there's no real scrambling on this route.

The total elevation gain to the summit is about 3000 feet, all of it packed into a horizontal distance of less than two miles. The overall effort is comparable to Bird Ridge, but this is a steeper hike with sketchier routefinding.

There are good tent sites in the bowl at 2500 feet, but there is no reliable water source. Most people day hike this mountain.

Fires aren't permitted, and large groups (12+) will need a permit to camp. 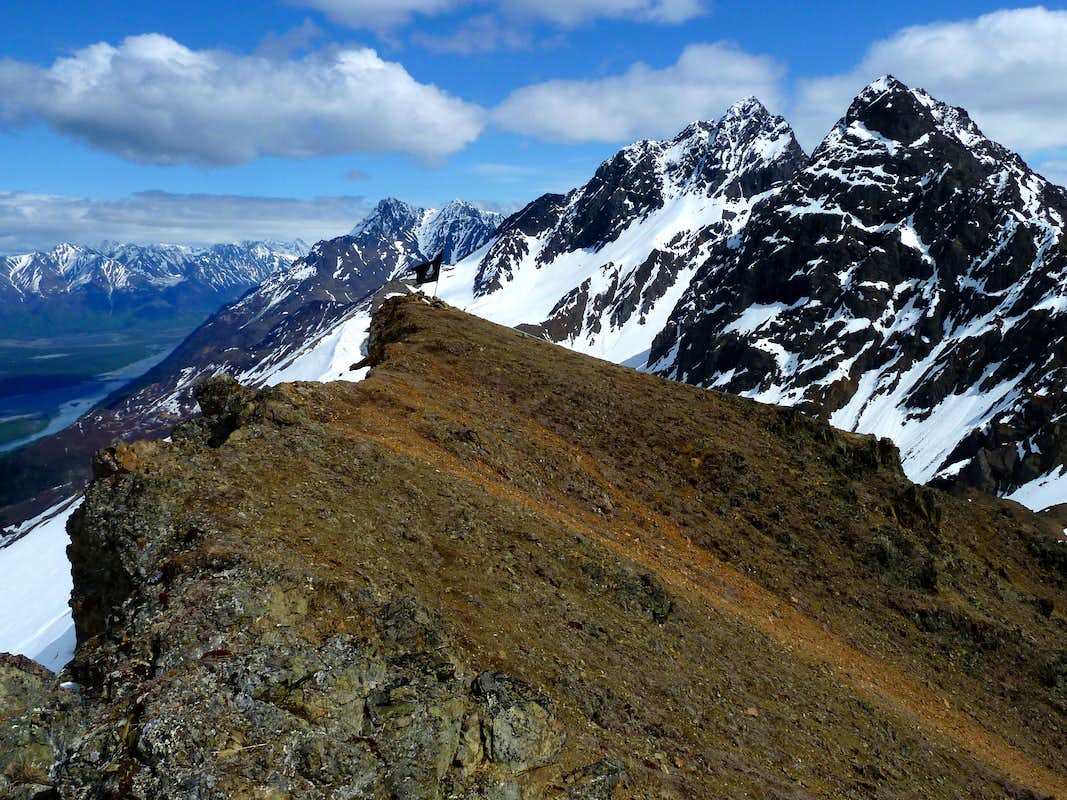 Eastward toward The Twins, with Knik River far below.