Saba (pronounced SAY-bah) is a tiny (13 square km) volcanic island, about 45km/28mi south of Sint Maarten which features world-class scuba diving and ecotourism. Saba bills itself as the "Unspoiled Queen of the Caribbean" and for once the tourists brochures are right. Saba is a beautiful, but very quiet island due to the fact that all beaches are small, there are no casinos or high rise hotels, and the nightlife is nearly non-existent. If you want to see a quiet island of the Caribbean; this is it. The hiking is great too.

Old Booby Hill is more challenging than its elevation indicates.

Since Old Booby Hill lies in the rain shadow of Mount Scenery, it has an almost desert type landscape and sparce vegetation.   This is interesting because the rain forest is less than two kilometers (about one mile) away.

Who can resist climbing a summit with the name Old Booby (although myself I prefer young boobies)?   Like many place in Saba, Old Booby Hill is humorously named.  Persumably it is named for the bird rather than boobs though.   A lot of other places in Saba are also humorously named.  The Bottom; Booby Hole; Booby Hill; The Bottom; Big Gut; All Too Far Bay; The Gut; Cave of Rum Bay; Viper Hole; and Pirate Cliffs are just some of the other humorous names.

The island has four villages, The Bottom being the capital, but Windwardside is the biggest. There are no rivers and there are only small streams on the island. This is not a difficult climb for anyone in reasonable shape. The trail is well defined and has stone steps every few yards (1064 in all.) The crater of the volcano contains a rainforest jungle consisting of ferns, tropical flowers and mahogany trees. At the top, the hiker is treated to stunning vistas of the island and views of nearby St Kitts & Eustatius. The summit is often covered in clouds, though.

There are 12 signposted trails for hiking on the island and the hike to Mas Cahones goes through the cloud forest. The trails cross private property, so please stay on the trail. A cloud forest is interesting in itself: "Tropical montane cloud forests are a rare type of evergreen mountain forest found in tropical areas, where local climatic conditions cause cloud and mist to be regularly in contact with the forest vegetation. These forests support ecosystems of distinctive floristic and structural form and contain a disproportionately large number of the world’s endemic and threatened species." 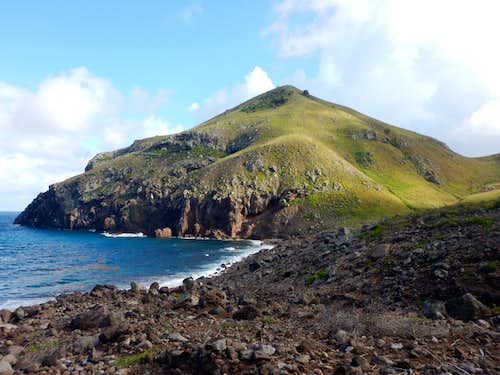 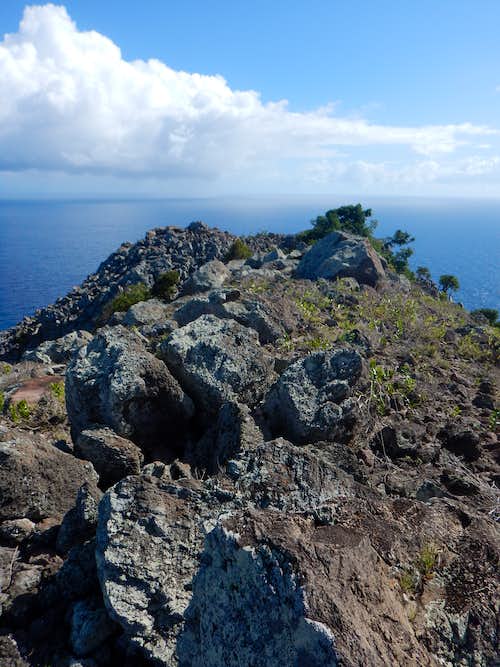 Most visitors arrive in Saba by air.

From Sint Maarten, Winair has several flights a day to Sint Eustatius, via Saba, a 15-minute hop for each leg. Since you have to stop in Saba anyway, you might want to stop there for a day or two to do some hiking or diving.

From Anguilla, Trans Anguilla has flights from Anguilla, Sint Maarten, and Saint Kitts. Taxi or walking is the best way to get around, as the island is not that large. Valid passports are required for all visitors including US and Canadian citizens. A round trip or onward ticket is officially required.

The US dollar is the currency used here. If you don't have US dollars, it is recommended that you exchange your money before getting to Saba.

Getting Around and to the Trailhead

Saba is small, so the best way to get around is walking or using a taxi (usually shared taxi).  There are two trailheads that can be used.

The Spring Bay Trail starts at th English Quarter village which is not far northeast of Windwardside and on the main road.  The trail is at the end of the short road, which is the second right turn if coming from Windwardside.

The Kelby's Ridge Trailhead is not far from the airport.  The road is not marked but it heads south from the big bend and is the first road (excluding the road down to Cove Bay that is basically at the airport) heading south once you leave the airport.  Walk the road (there isn't much parking) to a driveway on the left as seen in the picture below.   The trailhead is at the end of the driveway, but isn't well marked.  Head up the hill and you will find the trail at the top of the ridge. 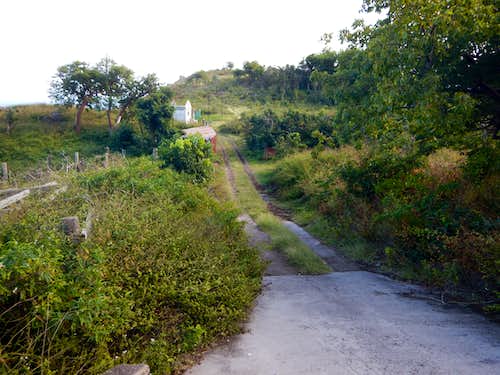 The recommended route, and one of the best hikes on the island is as follows:

From the Spring Bay Trail at English Quarter, follow the trail down towards Spring Bay Flat and to the saddle west of Old Booby Hill.   The trail is steep, but obvious, and if you do the route described, you will be heading downhill, so it's a pleasant walk. Be aware of the poisionous Manchineel trees in the area (there are signs warning you of the trees).

From the saddle, head straight up the goat trails to the summit of Old Booby Hill.  Because of the steepness, this takes longer than it looks.  You may get some minor scratches if you are wearing shorts.  Watch for cactuses as well.

From the summit of Old Bobby Hill, return to the saddle west of the peak and follow the trail north to Spring Bay.  The trail fades a bit here, but follow the slopes above the coastline and pick up the trail to Kelby's Ridge and then follow the road to the main road on the island.

One you reach the main road you can walk down to the airport and catch a taxi, or you can walk the road back to Windwardside.  You may catch a ride part way up.  Plan on a half a day to most of a day if you walk the entire way.   It's a nice hike. 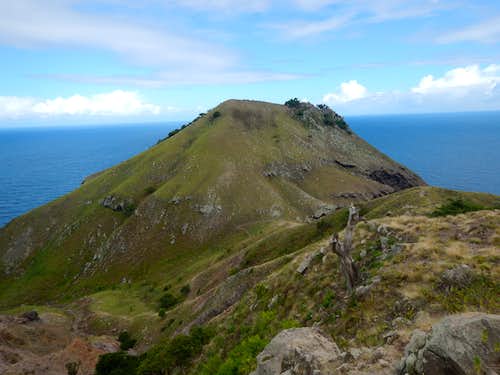 Old Booby Hill as seen from the Spring Bay Trail. 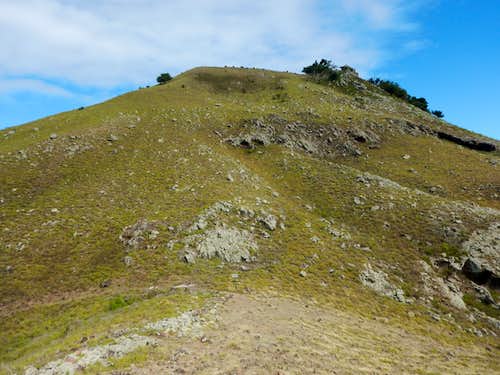 Old Booby Hill from the route to the summit. 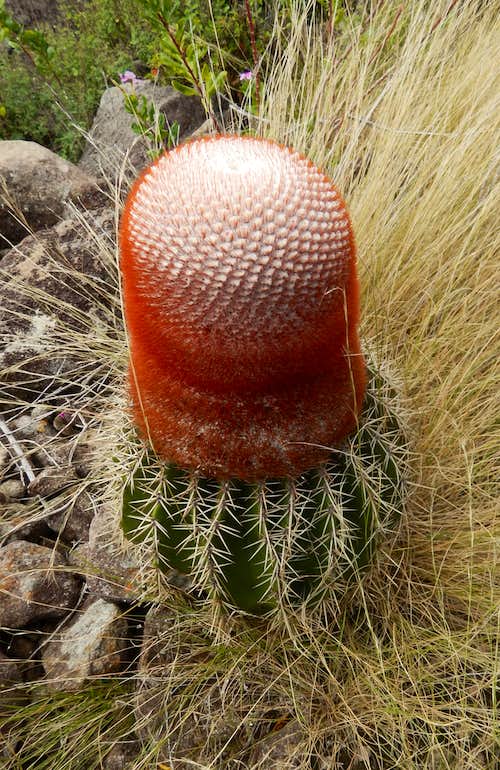 There is no red tape, so please take care of the area. 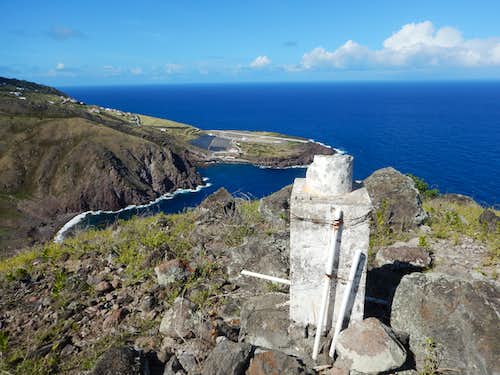 Camping is allowed on the island at Down Gut, Gray Bush, Mary Point (though this was closed since Hurricane Irma in 2017 and the future status is unknown), and The Flat.

The Saba Tourism Office has a list of places to stay below:

Hiking in the drier season is best, but the summit can be visited year round as long as the weather isn't extreme. August through October have the highest chances of hurricanes. There are no real dry season on the highest slopes of the mountain, but some seasons are certainly wetter still than others. Bright sunshine or heavy rains are possible at any time. Historically, February, March and April are the driest months (the chart below was skewed by a few large storms), followed by December and January. June through November are wetter, although the difference from the dry season is not always dramatic. From about mid-December through early May is the best time to climb, but even in the driest seasons, it rains frequently up high.

Weather averages for Oranjestad on St. Eustatius 2005-2015.  Old Booby Hill will be slightly cooler.   Since Old Booby Hill sits in the rain shadow of Mount Scenery, it will be quite a bit drier too.   It has an almost desert like landscape.