Crampons are external boot wear with forged metal points to provide traction on snow and ice. Crampons were designed to aid climbers with mountaineering, glacier travel and vertical ice climbing. Over the decades, specialized crampons developed to provide better support for techniques like front pointing, thus enabling treacherously dangerous ice flows to be ascended much easier.

10 points crampons with were first introduced by Europeans in the early 1900s. These crampons lacked forward pointing spikes, so climbing required step cutting on steeper terrain and 10 point crampons can still be found on the market today. In the 1930s, two additional forward-slanting points were added, giving us the design we enjoy to this day and but eradicating the need for chopping steps.

While crampons are an invaluable tool for a mountaineer, they were not used as often as today until the development of plastic-shelled climbing boots, because the straps used to affix the crampons to early mountaineering boots had a tendency to restrict blood flow to the feet of the climber wearing leather boots. Crampons are usually made of hardened steel, but lighter weight aluminum crampons came of age with the popularity of European alpine ski touring. In ski touring, the need to wear crampons is less frequent & countered by the need for a light pack yielding fast, efficient travel over long distances.

The angles of the first two rows of the crampon’s points determine the best use for a particular set of crampons. Front points that point downward are followed by a second row which is angled towards the toe in order to reduce calf strain by allowing the boot heel to be lower than the toe. Crampons like these are better suited for front-pointing on steep ice. When straight and horizontally flat points are used instead, the crampons are much better suited for snow & general mountaineering. 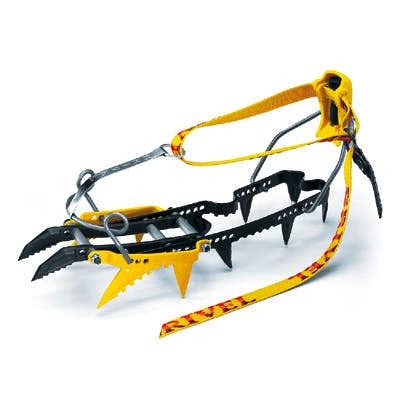 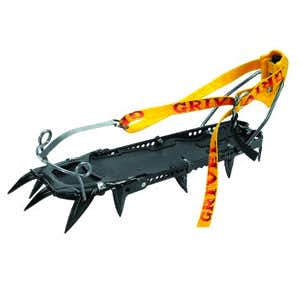 Crampons designed for technical ice climbing may have an option for their front points, which can be configured in one of two ways. You can have dual front points or you may have a mono point. The mono point can be centered or offset to either side of the crampon. Many climbers prefer a single front point as they may feel it easier to kick into the ice. This is not the choice of all climbers or for all situations; therefore, many crampons are modular and enable one to switch between mono and dual front points.

There are two types of crampon platforms the boot fits atop: hinged and rigid. Hinged crampons provide flex at the instep and bend with the natural motion of walking, thus, are the preferred style for almost any type of mountaineering with the exception of steep technical ice climbing. A rigid crampon does not bend at the instep, so when climbing up steep technical ice, they allow the climber to keep their heel lower when front-pointing, thus less tiring as a result. Rigid crampons tend to be slightly heavier and do not perform as well in mixed terrain. Generally, though, most people will use hinged crampons.

There are three main types of binding attachment systems for crampons: the Automatic, Semi-automatic, and Universal strap on. The Automatic system is made for rigid boots with full toe and heel welts. The front bail rests on the toe welt and is secured once the heel bail is snapped onto the heel welt. Automatic bindings are the most secure configuration for aggressive ice and alpine climbing. Semi-Automatic, also known as Newmatic, employ an automatic heel and universal toe to fits a variety of specialty mountaineering boots with welted heels and standard toe. These were designed for a secure fit on semi-rigid boots. The Universal Strap On system uses a Thermoplastic heel and toe harness to wrap around nearly any kind of boot and is secured by straps. The plastic heel and toe harnesses replaced the old nylon webbing straps of the traditional the Universal Straps system that held the boot tightly to the crampon. Designed primarily for hiking and classic mountaineering in non-rigid boots, this system is not suitable for telemark boots.

The biggest problem with crampons is in temperatures not far below freezing, where packed snow produced a "balling up" effect on the sole. Snow build-up reduces the crampons ability to penetrate into a frozen surface, even to the point of eliminating any penetration or traction related to the sole of the boot.

There are two solutions: one is to periodically knock the accumulation loose -- in extreme conditions, even with every step taken by knocking the shaft of an ice-axe against the inner edge of the sole or by kicking something like a tree trunk or rock outcrop. Prevention is also feasible: Many crampons can be fitted with shaped slabs of somewhat flexible plastic called "anti-bot" plates, which engage with the body of the crampon, and present the snow with a surface to which ice will not freeze.

Crampons are graded with a traditional system of C1, C2, and C3. These grades are used to determine compatibility with a walking or climbing boot. Boots are graded B0 (incompatible with crampons), B1 (a sturdy hill walking boot), B2 (a stiffer mountaineering boot) and B3 (a fully rigid climbing and mountaineering boot). The number of the boot must be equal to or higher than the number of the crampon, so a B3 boot would generally be compatible with all types of crampon. A B2 can be used with a C2 or C1 crampon and a B1 boot can only be used with a C1 crampon.