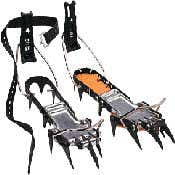 These were on the market as Black Diamonds feature crampon for vertical ice in the early to late 1990's.

Amazingly, Black Diamond confessed to me recently that fully rigid 12 point Switchblades weighed in a full two ounces under the current Petzl and Black Diamond competitors manufactured for the same conditions. Crazy!

In 15 years of use, I never had a bad day in my Switchblades, maybe because I love climbing and all its hardships. I just retired them in March of 2009 when I purchased the CAMP Vector Nanotechs (the highest technologically advanced crampon in the world). The crampons boot attachment system always performed flawlessly and never fell off my boots en route to 100+ WI summits in SE Alaska.

My partner worked up homemade snow antibotts for these with rubber crown wall molding from the hardware store and could not have been happier. The Switchblades dual points interchanged with a mono point and were sharper the last time I used them then when I purchased the pair in 1994.

Though folk complained about cosmetic rust, the function of these crampons never faltered.