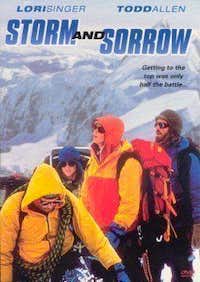 This is a dramatization of an American expedition's climb in the Pamirs mountain range in the Soviet Union. One American lost his life along with the Russian climber Elvira Shataeyvn and her entire team of female climbers. The story focuses on 25-year old Molly Higgins who is asked to climb with the American expedition. Although she was an experienced rock climber, she had virtually no experience on ice. On top of this, her male colleagues presumed that, being a woman, she was really not up to the challenge of tackling the storm ravaged peaks of the high Pamirs. Molly proves herself, but no one on the team anticipated the frightening conditions encountered up high.

Enjoyable
Good dramatization of a frightening expedition and the tragic loss of several climbers, including an entire Russian women's climbing team. Molly Higgins had guts to sign on for this expedition and initially had a real rough time proving herself to the macho men team members. A realistic portrayal of a mountaineering expedition, and not a "Vertical Limit" or "Cliffhanger" type of production.