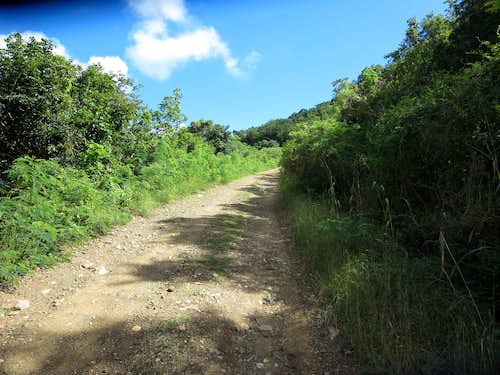 Road leading to summit
This is a 2 - 3 hour hike which is located near the Havensight Point docking area of Charlotte Amalie, St Thomas, US Virgin Islands. There is a road that goes up to the summit if you approach from the north side of the mountain. I first attempted to climb up a road that winds under the gondolas that run up the west side, but was stopped near the top of the lifts by an employee who refused to permit access to the last several hundred feet to the summit from that location. At the summit towers, there are the remnants of the original chairlift (see photo). 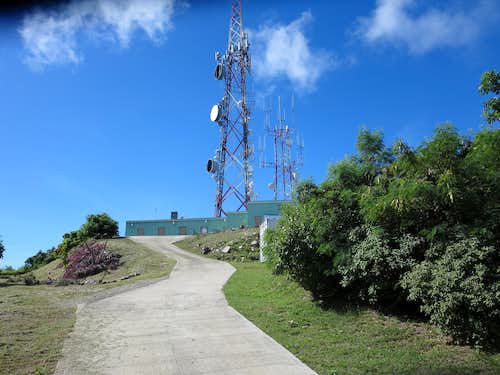 Communication towers on summit
The views from atop this equipment are reward enough for the class 4 scramble to get on top! The estimated distance for this hike is about 5 miles roundtrip from the Havensight docking area and elevation gained is nearly 1,000’. 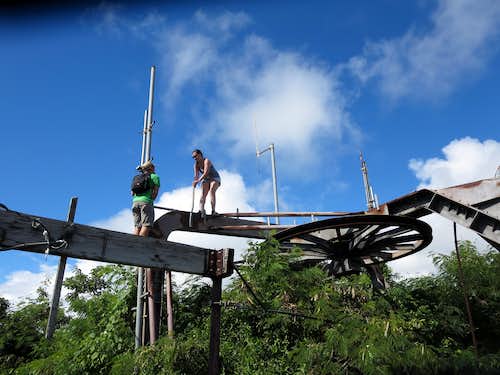 There are many ways to reach Charlotte Amalie, Saint Thomas including air and sea. It is a popular cruise stop in the eastern Caribbean.

If you arrive aboard a cruise ship that docks at the Havensight area, it is a simple walk past the West Indian Company dock to Rumer Drive which goes past K Mart. Near the intersection with Weymouth Rhymer Hwy, there is a McDonalds on your left. From Rumer Drive take the right turn onto Weymouth Rhymer Hwy (I recommend the right side of the road, facing traffic due to the lack of a sidewalk) and hike up the hill until you see the Paint Depot on your right. Take the road on your right before you reach the Paint Depot. This road continues up the mountain to the summit. At the summit, walk around the buildings on their right side to reach the old chairlift remains.