Located in the southern portion of the Sandia Mountains below South Sandia Peak, this overlooked summit towers above Embudito Canyon to the north, and so-called 'Sunset Canyon' to the south. Its proximity to other nearby summits and ridges hides its status as a distinct and separate peak. Only when it is viewed from certain angles does its reveal its true relief. The broad treed summit doesn’t seem to hold the promise of tantalizing views, but the sparse Pinyon Pine and Junipers allow tremendous views in all directions. The views are also fantastic during the ascent of the Northwest Ridge as the ridge drops steeply to the north into Embudito Canyon, and to the south into 'Sunset Canyon'. The Peak boasts an impressive band of cliffs near its summit on its southwest flank above 'Sunset Canyon'. These cliffs catch the afternoon sun and turn a rosy hue of pink; the same pink that gives the Sandias (Watermelon) their name. The mountain is strewn with large rock outcroppings and boulders comprised of the unique Sandia Granite.

The flora is similar to other parts of the lower Sandia Mountains. The lower flanks of the mountain are covered in high desert scrub consisting of Chamisa, Mountain Mahogany, Cholla, and some Juniper. As one travels farther up the rocky slopes, Juniper and Pinyon Pine take over.

Since the mountain is close to Albuquerque, it can be enjoyed in just a few hours, and provides a welcome mountaineering distraction in the midst of urban life. The mountain can be climbed almost the entire year around in just a few hours. An ice axe and crampons are recommended in the winter because parts of the trail can be steep, loose, and slippery. 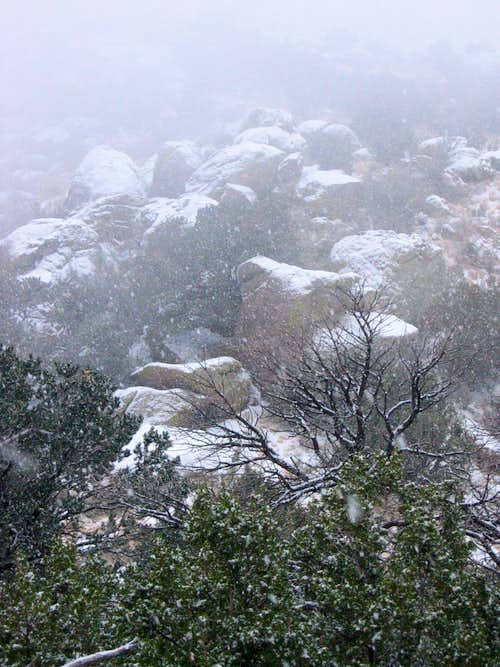 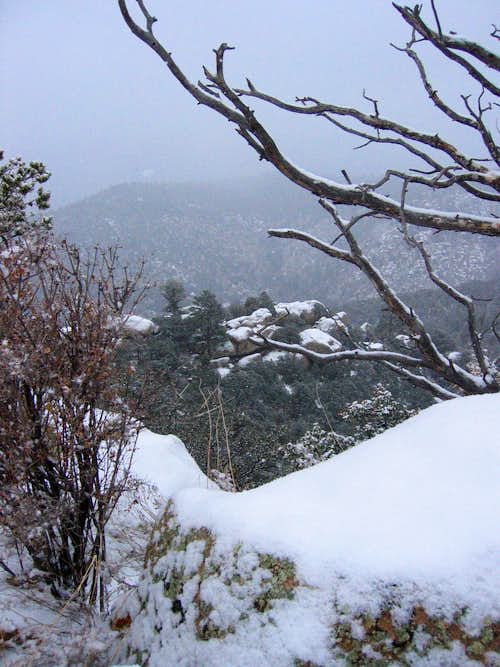 There is no fee to park at Embudito Canyon. However, the parking lot is gated, and is open from 7AM to 9PM April to October, and from 7AM to 7PM November to March. If hiking into the Sandia Mountain Wilderness, you are allowed to leave your car overnight, just be advised that it will be locked into the parking lot.

Dispersed camping is allowed in the Sandias, but there are no designated campgrounds. Fires are not allowed.

The Cibola National Forest publishes the Sandia Mountain Wilderness Map available locally in Albuquerque at REI near the intersection of Montaño and I-25. It costs about $14.95 and is plasticized for weatherproofing. You can get it for $7 if you go directly to the Cibola National Forest Office off of Osuna. To get there from I-25 head west on Osuna. Take a right onto Chappell Drive. The office will be on the west side of the street in about 1/4 mile.

Probably the best map to purchase is the newer Sandia Mountains – GPS Powered Trail Map by Dharma Maps. It is a 1:45,000 scale topographic map complete with 1:25,000 insets, mileages, and access points. It is printed on waterproof paper and is smaller, more detailed, and more portable than the National Forest map. It can be purchased at Amazon.com for $9.95, and is also available locally at REI near the intersection of Montaño and I-25.