The Needle is the prominent pyramid shaped rock formation in the northern portion of the Sandia Mountains just south of the large rock face known as the Shield. Its appearance is appealing to any would-be climbers, but the mountain itself is a serious undertaking that requires knowledgeable Trad skills, a willingness to bushwhack on long approaches, and parties that travel quickly. Originally called the Pyramid, this mountain has a first recorded ascent in 1944, but probably had seen climbing activity in the 1930's. Most early ascents were up the East Saddle Route. Located entirely within the 37,877 acre Sandia Mountain Wilderness, it is well known for its long and complicated routes, loose blocks that can dislodge at any moment, and sketchy protection. From the west, a huge ramp is visible and is called Fifth Avenue. This is the start and finish of several climbs, as well as an escape route if climbers get in over their heads. The most famous of its climbs is the 10-15 pitch (1300 ft) Southwest Ridge (5.8) first climbed in 1959. This route is a true classic and can take a fast party 10-12 hours car to car. Another often-done route is the 4th class East Saddle Route. But do not be fooled by the rating, it is exposed, complicated, loose, dirty, and sandbagged. This mountain is a true alpine-style adventure waiting to be had by any mountaineer willing to tackle it. The rock may be fair to poor, but the views and challenges are superb. For more information, check local libraries for the out-of-print Hiker's and Climber's Guide to the Sandias by Mike Hill or stop at REI and purchase the newer Sandia Rock by Mick Schein. 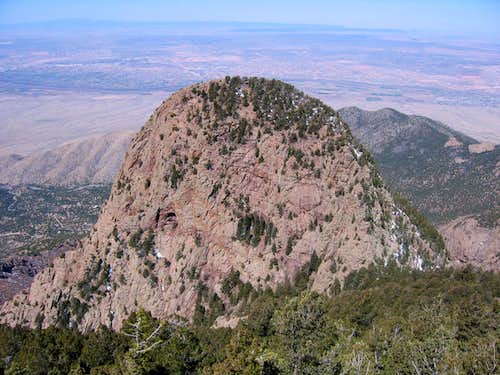 Looking west at the Needle from the prominent bulge in the Crest - 3/4 mile north of the radio towers. 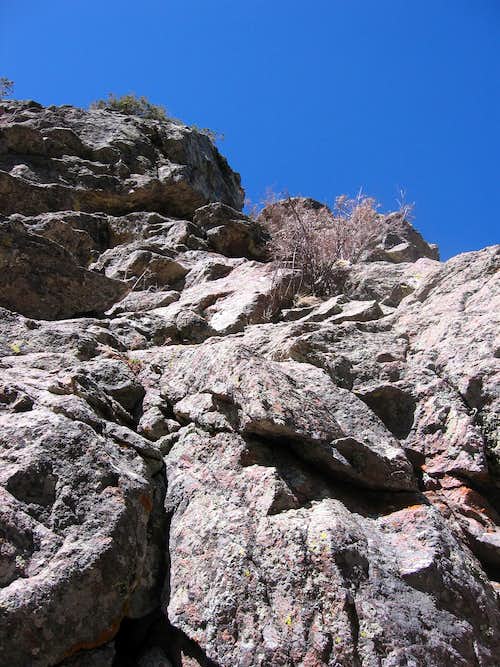 The Start of the East Saddle Route
Mike Hill's book lists ten different routes up the Needle. A brief description and location of each route follows. These are summaries based on Mike Hill's descriptions. Be sure to check out his book Hiker's and Climber's Guide to the Sandias for complete route information.

East Saddle Route, 4th class. 2-3 pitches (roped or not as you choose) up the obvious buttress on the east side. There are loose blocks and exposure. Descend the route. Some folks - including the author of this SummitPost page - believe this route to be sandbagged and probably closer to a 5.4.

Southeast Ridge, 5.4. 5-6 pitches. Starts part way up the ridge to attain the summit. An additional 6 pitches of climbing can be had by starting all the way at the bottom but it increases the difficulty to 5.8 with some possible A1.

Southwest Ridge, 5.8. 15 pitches. This classic climb is a serious undertaking and ascends the obvious ridge on the southwest side. The climbing is sustained 5.7-5.8.

Route 5, 5.7 A1. 6 pitches of climbing starting at a steep couloir in the middle of the west face of the Needle. Exit the chimney to the left when it gets steep. Finish at Fifth Avenue.

Hoy's Chimney, 5.4. 2 pitches up a chimney just north of the center of the west face to Fifth Avenue.

Northwest Ridge, 5.7. 3 pitches up the ridge to Fifth Avenue, and then 3rd class to the top.

West Chimney, 5.7. 3-4 pitches up the same chimney as Route 5, but stay in the couloir all the way up to Fifth Avenue.

To get to the Needle, there are two options: 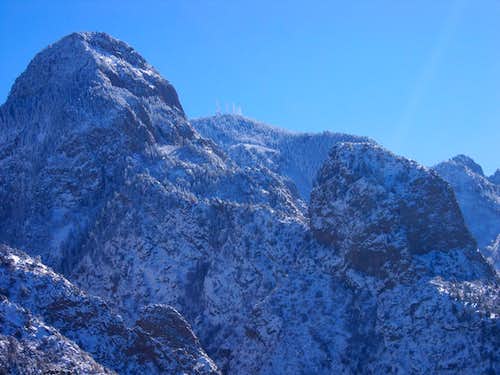 The Needle from the northwest. The rock formation on the right side of the photo is the Prow.

North Crest Trail: This option is the standard for the Southwest Ridge and the East Saddle Route. From Albuquerque take I-40 east to the town of Tijeras. Exit at Tijeras and follow the signs to NM 14 north and the town of Cedar Crest. Take a left onto the Crest Highway (NM 536) and drive the 13+ miles to the summit towers and park. The North Crest Trail starts just to the east of the radio towers. Parking is $3.

Movie Trail: This option is for climbs that originate on the west and north sides of the Needle. From Albuquerque, drive east on I-40 to Tramway Road. Head north on Tramway Road to FR 333. When the road splits to the right (FR 333 towards Juan Tabo Picnic area) and left (FR 333D), take the left. Drive about 1/4 mile and park at the Piedra Lisa Trail parking lot. Parking is $3.

For further approach information, refer to selected routes (when people post them). 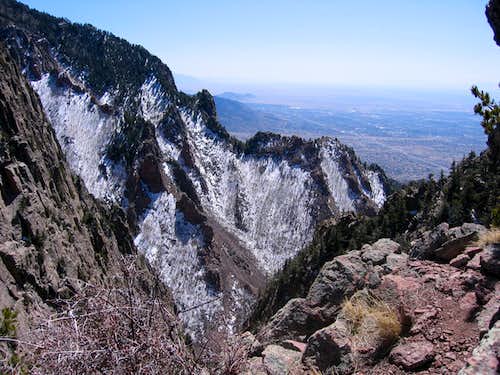 The view southwest from the top of the first pitch of the East Saddle Route.

Sandia Mountain Wilderness is closed to mountain bikes and horses at all times of the year.

Parking is $3 for both approaches.

Some of the areas around this mountain (the Shield, Movie Trail) are closed March 1 to August 15 for nesting raptors. Be sure to check with the Sandia Ranger District at 505-281-3304 for specific information about closures that affect the route you would like to do. 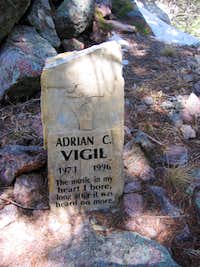 A memorial marker at the base of the East Saddle Route.
Dispersed camping is allowed in the Sandias, but there are no designated campgrounds. Fires are not allowed. This mountain is close enough to town that it is easy to stay with a friend or in a hotel.

The Cibola National Forest publishes the Sandia Mountain Wilderness Map available locally in Albuquerque at REI near the intersection of Montaño and I-25. It costs about $14.95 and is plasticized for weatherproofing. You can get it for $7 if you go directly to the Cibola National Forest Office off of Osuna. To get there from I-25 head west on Osuna. Take a right onto Chappell Drive. The office will be on the west side of the street in about 1/4 mile.

Probably the best map to purchase is the newer Sandia Mountains – GPS Powered Trail Map by Dharma Maps. It is a 1:45,000 scale topographic map complete with 1:25,000 insets, mileages, and access points. It is printed on waterproof paper and is smaller, more detailed, and more portable than the National Forest map. It can be purchased at Amazon.com for $9.95, and is also available locally at REI near the intersection of Montaño and I-25.

I also recommend checking route descriptions in the out-of-print Hiker's and Climber's Guide to the Sandias by Mike Hill or stop at REI and purchase the newer Sandia Rock by Mick Schein. 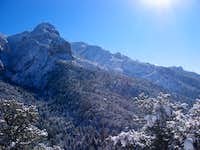 The Needle from the Piedra Lisa Trail.