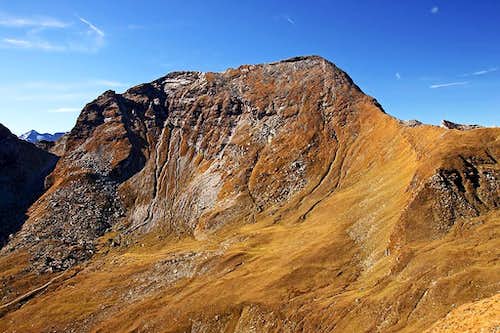 On the very east, the summits of Hohe Tauern are lowering below the altitude of 3000 m. From Grosser Hafner, 3076 m, two mountain streaks are going towards the south east. The northern one soon lowers considerably, ending finally on the Katschberg pass. The southern streak however retains its high alpine character. In the small group of three Malteiner Sonblicks it still exceeds 3000 meters, further to the south-east the chain is only slowly losing its altitude. In this chain, Reitereck is the last very dominant and high mountain.

Reitereck belongs to the area of Fachaun high valley. That is a beautiful and very popular place. Once there were only broad alpine meadows. Nowadays people there are living very much of tourism as well. The high valley stretches from some 1600 m till 2100 m and is surrounded by popular, mostly easily reachable summits: Faschaunereck, Reitereck, Wandspitze, Poisnig and Stubeck. The cart road into the valley is closed for public traffic, even for mountain bikers. So, it is a nice hiking area. In winter it all converts into a paradise for tour skiing. And Reitereck is the most valuable goal there. Another advantage of this high valley is the fact, that a good, soutwards oriented asphalted road reaches the altitude of 1600 m, where some mountain huts and reastaurants are situated. The whole slope of Maltaberg, from Malta valley below, up to the altitude of 1600 m is actually dotted by picturesque old farms and also weekend huts.

So, Reitereck is in summer conditions a first class hiking summit, easy to be reached. In times of tour skiing, mostly in spring, it is a more challenging goal. The summit slopes are very steep and for enjoyable skiing down in the Faschaun valley, conditions must be good. This all refers only to the normal ascent route. All other sides are much hardly passable and very rarely visited. But there is more - after visiting Reitereck by the normal route, experienced hikers, used of also some very easy rock climbing, can continue the tour along the whole horseshoe above the valley end. The tour Reitereck - Wandspitz - Poisnig is one of the most rewarding in the broader area.

A Bit Of Geography

From the summit of Reitereck, the main ridge is stretching towards the center of Ankogel group. The first neighbouring summit is Elendspitze, 2782 m, then Ebeneck comes, 2696 m, then Seemanwand, 2822 m, and finally Schober (Eisig), 2967 m. That ridge is very remote and its climbing requires UIAA III degree, with a place or two UIAA IV.

On the summit of Reitereck the ridge is branching. Towards the south a strong ridge goes, bordering the Faschaun valley on the west. Close to Reitereck there is point 2734 m, then walls abruptly drop on the distinct Glockwandscharte (notch), 2472 m, on the other side a quite sharp ridge rises again on the popular Faschaunereck, 2614 m. So, Faschaunereck and Reitereck can hardly be done in one convenient tour.

The ridge from Reitereck towards the east lowers on Lasornscharte, 2520 m, then continues on the neighbouring Wandspitze, 2623 m, after which it branches again. The south-eastern branch borders the Faschaun valley.

The northern wall of Reitereck (Glockenwande) is some 700 m high. It is steep, but not very compact, with many grassy slopes among rocks. So it is not suitable for harder climbing.

Reitereck's panorama is very broad and various. Its most beautiful part is for sure the view on the "White Tauern Queen" - Hochalmspitze. Around it, in the western direction, many other high summits of Hohe Tauern are seen.

Reitereck west panorama
Towards the south the views fly more in the distance. There, on the horizon, beautifully are drawn the ridges of Karavanke, Julian and Carnic Alps. The view towards the east is different again. Standing 500 meters higher, the rounded mountains of Nockgebirge are seen as a broad, hilly area. Towards the north-east and north we can see all the main summits of Niedere Tauern, and, rising from behind of them, the light grey walls od Dachstein. 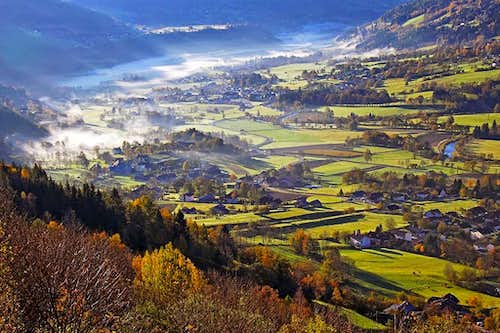 Maltaberg
The almost exclusive starting point for Reitereck tour is Maltaberg, the parking place near Kramer Huette, 1604 m. The approach on Maltaberg is fast. You exit Salzburg - Villach highway at Gmuend (picturesque town, very worth visiting). From there you drive northwards into the broad Malta valley. You pass a few villages, when reaching the village of Malta itself, deter right and follow the plates up to Maltaberg. On 1604 m the road is closed for public traffic, so you park there. In summer also a public bus drives there. You can see a detailed map on: http://www.austrianmap.at/. 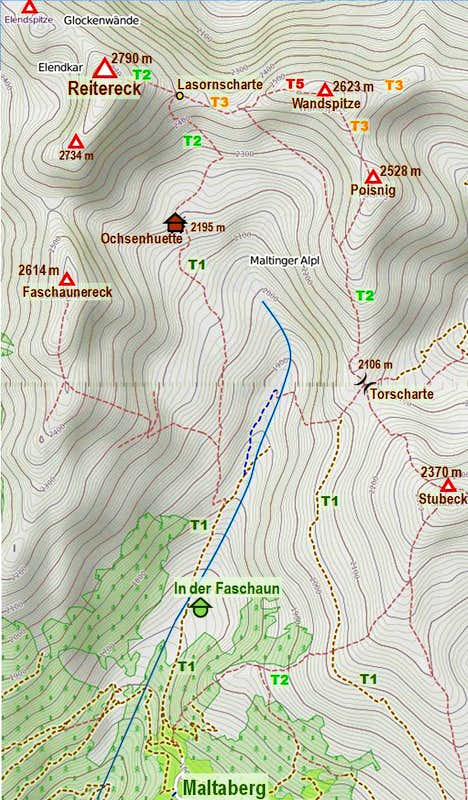 I will describe only the normal ascent on Reitereck. The east ridge ascent belongs actually more to the neighbouring Wandspitze, and for other routes I have no detailed information. 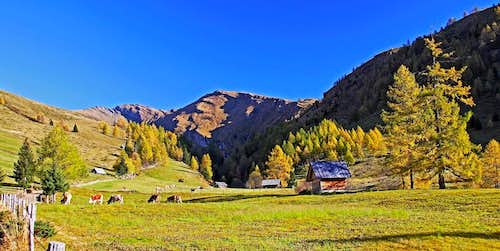 In der Faschaun
On the normal route you first ascend through the Faschaun valley till the valley end. From there you negotiate the grassy slopes to Lasornscharte, turn there left and then ascend the last 300 m of the east ridge. It's technically an easy hike up (even in the upper part only a good T2 on the Swiss Hiking Scale). For 1200 m of altitude you will in average need 3 h 30 min, as there is also some distance to cover. Regarding gear you need only good shoes and poles.

From the parking place at Kramer Huette, 1604 m, you continue by the mountain road towards the north. It goes almost horizontally and soon you enter the alpine meadow - In der Faschaun. There are many huts and the road soon crosses the creek (Feistritz Bach), 1652 m. On the other side of the valley the road then does a few steeper ascents, always crossing the slopes. In some 45 minutes from the parking place you reach a small hut, where the marked trail on Faschaunereck deters left (plates), cca 1900 m. You continue by the road, which persistently winds up across the slopes. While in the lower part the alpine pasture scenery with many larches and meadows is nice, above it becomes only grassy and a bit boring. On the left the distinct notch shows (Glockwandscharte), right of it Reitereck massif and above the valley end Wandspitze. Then the road ends at the last huts - Ochsenhuette, 2195 m.

From there the marked path crosses the quite flat valley end towards the north. When reaching below the rocks, it turns sharply left, aiming the broad grassy slopes below Lasornscharte. After crossing is done, the path goes in many switchback up, directly on the main ridge. We reach it on some 2500 m, and the nice northern views open.

This saddle, Lasornscharte, can be also reached by another marked path, coming across the Faschaun valley from Torscharte, 2106 m, NW of Stubeck. The marked path from that saddle ascends first the ridge of Poising, then crosses the slopes of Wandspitze and comes finally up the grassy slopes on Lasornscharte.

On the saddle we turn left and follow the more and more steep path, going up close to the north face edge, always in switchbacks. Even if the summit and the cross on it look close, we still need to do almost 300 m of altitude. The path is steep, but nowhere exposed or technically difficult. I'm not sure if more than a place or two could be rated T3, all the rest is T2. 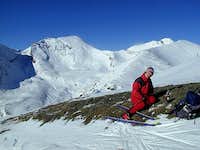 Reitereck in times of tour skiing

In good conditions, the above described route is also often done as a ski tour. The most appropriate time is usually in spring, because due to quite high altitude the steep slopes and the summit ridge can be in winter covered with very hard snow or even icy. Otherwise the slopes are very nice, as they are east, and later also south oriented, snow can become very good for skiing even in the morning. The good news is also, that the road on Maltaberg (just till Kramer Huette) is usually cleaned all the year, except perhaps after really some heavy snowing.

For the ascent on Reitereck we don't need to sleep in mountain huts. Otherwise on Maltaberg two huts can be mentioned:

Kramerhuette, 1604 m. It's an official mountain hut on Maltaberg, reachable by car. Leonardhuette, 1610 m. It stands very close to Kramerhuette and is opened through a whole year.

If you have it, please add more information, especially: > Photos and experiences from skiing. > Climbing on Reitereck from the NW or by the S ridge. > Approaches from the side of Poellatal.