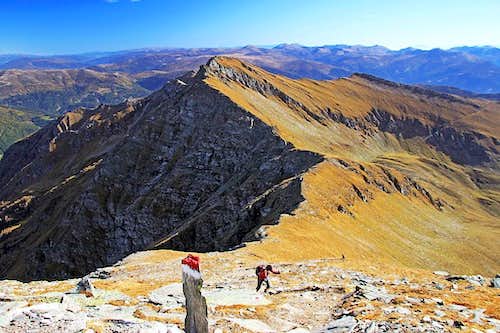 We are ascending Reitereck from Lasoernscharte. In the background is Wandspitze with its W ridge. 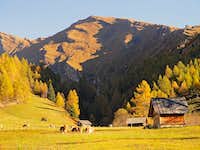 Poising from the Faschaun pasture

is the hardest accessible summit around Faschaun high valley. Even Reitereck, its highest western neighbour is quite easily approachable, but Wandspitze is having sharp ridges and steep, grassy southern slopes, which from an ordinary hiker requre some additional care. Still, it's a nice hiking goal, and to those, who who do also some easy climbing (up to UIAA II-), it can offer a great crossing. The tour: Maltaberg - Reitereck (3 h 30 min) - Wandspitze (5 h) - Poisnig (5 h 30 min) - Torscharte (6 h) - Maltaberg (7 h) is the most what Faschaun valley can offer to an experienced hiker.

The summit is rising on the ridge, stretching from Reitereck towards the east. On Wandspitze the ridge is branching again. The east branch continues on the nearby Sternspitze, 2497 m, and the southeast branch goes on the nearby Poisnig, 2528 m, and then further southwards down on Torscharte, 2106 m, beyond which the popular Stubeck rises. The southern slopes are steep, grassy, and intermitted by rocks. They are lowering to the end of Faschaun valley, called Maltinger Alpl. The northern walls are higher and rocky. They fall some 600 m as a rock wall and then lower down into the valley of Lasoern Bach, a side valley of Poellatal.

is the neighbour of Wandspitze, which can serve as a substitution goal if Wandspitze is too hard te be reached. Its western faces are quite steep, and also intermitted with rocks, not much less steep are the eastern slopes. But the south ridge is broad and easy.

Reitereck from Wandspitze
Summit views are very similar as those from the nearby Reitereck. However, the western horizons are obscured by the higher brother, who in turn offers a nice scenery with its northern walls.

Maltaberg trailhead
There are two convenient trailheads for the ascent on Wandspitze:

The first one is of course Maltaberg, the parking place near Kramer Huette, 1604 m. The approach on Maltaberg is fast. You exit Salzburg - Villach highway at Gmuend (picturesque town, very worth visiting). From there you drive northwards into the broad Malta valley. You pass a few villages, when reaching the village of Malta itself, deter right and follow the plates up to Maltaberg. On 1604 m the road is closed for public traffic, so you park there. In summer also a public bus drives there.

The second option is Wansing Alm on the south-east. The private hut there can be reached by a moutain road. You exit Slzburg - Villach highway in Rennweg. From there drive to St. Peter village and from there follow inscriptions into Wolfsbach valley. At Wansing Huette there is a lot of parking space.

You can see a detailed map on: 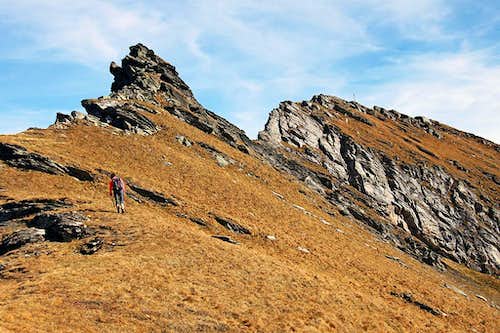 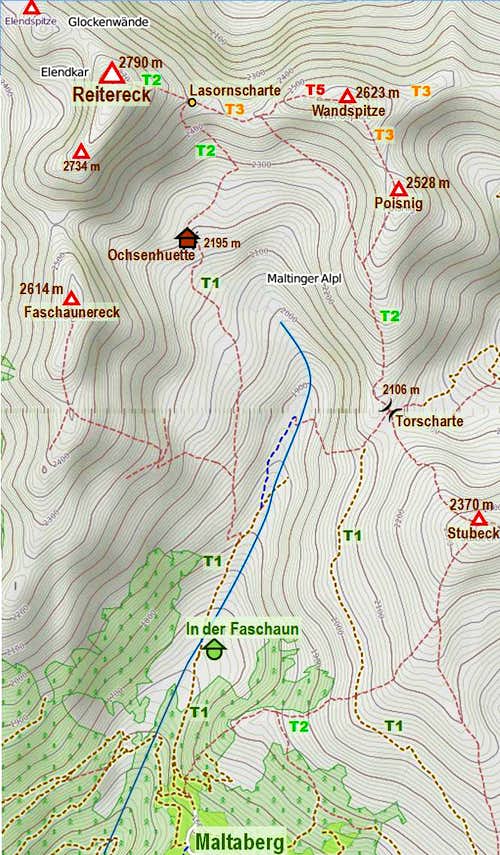 The marked path, which is crossing Wandspitze, is called Maurilius H. Mayr Weg. On the west ridge there are a few easy climbing details, where there is no path. Some are secured by hooks and cables (the difficulty of these short ferrata sections is B/C), some passages are not protected at all and require easy climbing of UIAA I+. For a hiker the whole western ridge would be rated T5 on the Swiss Hiking Scale. The eastern ridge is easier. Only on its top there are passages of T3, which require some additional care. Otherwise the whole crossing is very nice and panoramic, requiring most of a day (6 h 30 min to 7 h from Maltaberg).

Interesting is also the scramble from Sternspitze to Wandspitze. Its difficulty is rated T4, with some details of easy climbing (UIAA I degree). This route is nice if we start on Wansing Alm, so making a fine round tour (in any direction): Wansing Alm - Stubeck - Torscharte - Poising - Wandspitze - Sternspitze - Wansing Alm. Altogether again some 6-7 hours, without Stubeck some 5 h 30 min. 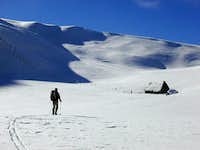 From Wansing Alm towards Torscharte

If we speak only of Wandspitze, it is not most suitable for skiing. The nearby Poising (which for now will not receive its own SP page yet) is however a nice tour skiing goal. The approach on top goes by the south ridge from Torscharte. This saddle can be reached either from the Faschaun valley or from Wansing Alm in the upper Wolfsbach valley.

For the ascent on Wandspitze we don't need to sleep in mountain huts. Otherwise on Maltaberg two huts can be mentioned:

Kramerhuette, 1604 m. It's an official mountain hut on Maltaberg, reachable by car.
Leonardhuette, 1610 m. It stands very close to Kramerhuette and is opened through a whole year.

In the upper Wolfsbach valley there is Wansing Huette, 1740 m, also reachable by car.