Hafner is one of the highest mountains in Ankogel group and I think the highest one in eastern part of the group. It is located on the east side of Malta valley, directly in face of the highest mountain in Ankogel group Hochalmspitze (3360m). Hafner is not hard approachable mountain but it has long approaches from everywhere. The normal approach in and the most visited goes from the valley Malta where the route crosses the long south slopes and goes by the hut Kattowitzer Hütte (2319m) and then over the SW ridge to the top. The second possibility goes from the north by the hut Rotgüldenhütte (1740m). This approach reaches the notch Wastlkarschare (2722m) that is on the NW ridge of Hafner, then crosses the west slopes below the glacier Wastlkarkess, reaches the SW ridge and then to the top. The third marked possibility goes from the east side from the hut Lanisch - Ochsenhütte over the notch Länischscahrte and then comes almost to the Kattowitzer hütte. All routes are marked.

Hafner is very powerful mountain and has three glaciers. The biggest is below the north face and it is called Rotgüldenkess. The second is the Wastlkarkess below the west face and the third one is the smallest Lanischkess below the east face of Hafner. On the north side by the hut Rotgüldenhütte there are two lakes: Unterer Rotgüldensee (1732m) and the higher and smaller Oberer Rotgüldensee (1997m). In the closest neighbourhood are also some smaller lakes on all sides.

First climber was probably a military mapmaker: Ltd. Gorizzuti far back in 1825.

Thanks to ¨Mathias who helped me with some information!


View from the Hafner

The panorama from the summit of Hafner. Ankogel and its neighbours.

From the top of Hafner you have a beautiful view on all Hafner`s neighbours and on all Ankogel group with the highest mountain Hochalmspitze, Ankogel and others. 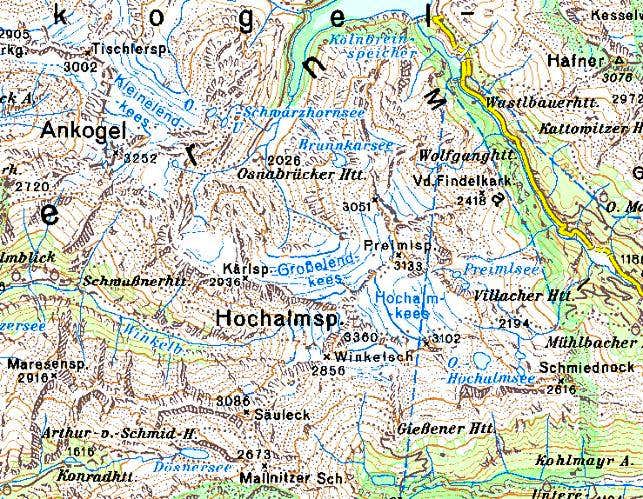 For the south approach driving by car into Malta valley to the lake Speicher see and you park by Sporthotel Maltatal. For the north approach you must go in the valley of the river Mur and for the east approach in the valley that starts by the town Oberdorf below the Katschberg.

You can find a detailed map on:

South approach . From the valley Malta by the hut Kattowitzerhüute (2319m) and then over the SW ridge to the top.

North approach. From the valley of river Mur, by the hut Rotgüldenseehütte (1740m) on the NW ridge and then over the SW ridge to the top.

East approach From the Lanisch - Ochsenhütte (an alpine pasture) to the S ridge and then over the SW ridge to the top.

The mountain lies in the Hohe Tauern national park, so you are obliged to strictly obey the rules of protecting nature.

For the road to Koelnbreinsperre you need to pay toll.

The best time for the snowless acends are not very hot days soo late Summer and Autumn. For skiing are the best month from the March to May but also in Winter when the risk of avalacnhes is not too high.

All three huts can be useful for sleeping and also the Sporthotel in the valley of Malta.

Around you wil find many camping places.