At 1236m Sant Jeroni is the highest point in the Montserrat massif approximately 50 km NW of Barcelona, Catalunya, Spain.

Unlike most of the other summits in the park, Sant Jeroni is not a sharp rock pinnacle requiring rock climbing skills to attain its summit. Indeed the last 200m of vertical gain is made up a long flight of concrete steps. Nevertheless, simply because it's the highest point, you just have to bag it. If those steps compromise anyone's conscience, there's compensation enough at the summit. Northwards look down almost 1000 vertical metres to the Llobregat valley and look up to the Pyrenees over 100km away. South and east the views extend as far as the Mediterranean coast and Barcelona and even, on a clear day, the island of Mallorca.

All approaches end and hikes start from the cable car station/parking area just below the monastery.

From Barcelona approach on the A16 and A7 Autopistas to the Martorell exit, then the C16 in the direction of Manresa. The Montserrat exit from this motorway is signed. Proceed initially to Monistrol and thereafter 7km on winding roads up the mountain to the monastery.

From Lleida approach on the A2 Autovia and take the Montserrat/Col de Bruc exit. Follow the signs for Montserrat and after 2-3 km meet the road coming up the north side of the massif from Monistrol.

Depending on the time and season, the upper parking areas fill up fast. If you arrive late and in July say, you could be faced with a walk from the lower parking lots. Cars are not allowed into the precincts of the monastery, or into the Placa de Santa Maria immediately outside. 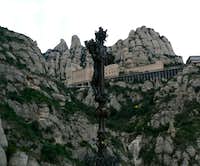 The rack railway (cremallera) from Monistrol to a new station right in Placa de Santa Maria was not running at the time of writing.

Two funicular railways provide local transport within the massif. Both run from stations close to the Placa de Santa Maria. The St Joan funicular goes uphill to provide access to the upper walking trails and the St Joan hermitage, whilst the Santa Cova runs down to a lower station allowing pilgrims easy access to and from the holy grotto (with works by, amongst others, Gaudi) and the hermitage of Santa Cova itself.

Sant Jeroni can be accessed easily via the St Joan funicular, an hours stroll along almost level paths to the old (closed) St Jeroni hermitage and then up a combination of concrete steps and paths 10 minutes to the top. But you don't want to make it that easy do you? Instead I recommend the following route around the massif in order to see all there is to see as well as to get a proper workout. The following involves 700-800m of total vertical gain and about 12km of horizontal travel. Expect to invest 6 hours or so in the endevour. 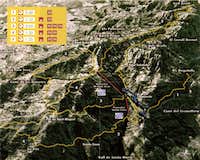 Sketch map of the route 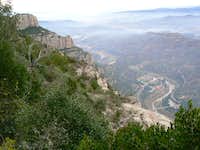 Between St Cova and La Frita 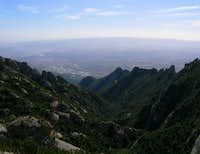 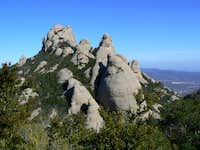 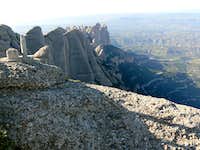 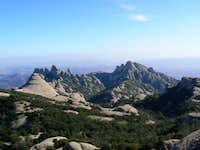 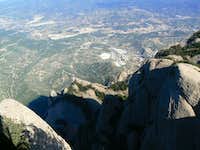 Urban sprawl below the summit 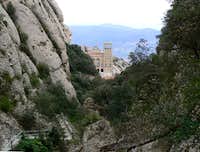 The last part of the route 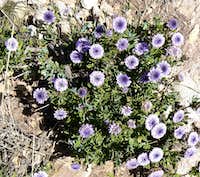 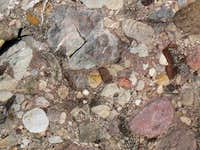 Start from the Placa de Santa Maria in front of the basilica, walk down to the new cremallera station and on its left find the paved walkway down to the bottom of the Santa Cova funicular. You lose about 150m walking down to the lower station. Thereafter follow the (still paved) path round to the south east towards the Santa Cova monastery. This part of the walk passes through many (12?) religious grottos built in to the rock faces to the right of the path. Easy access to these for visiting pilgrims is probably why there's a convenient funicular.

Just prior to reaching the monastery look for a dirt path off to the left and signed for Collbato amongst others. This path takes you east under the monastery and then traverses under the north cliffs of the upper massif to the ridge of La Frita. Cross the ridge crest and carry on east for 500m before the route gradually turns west and starts the climb up to the upper massif near the overlook at Pla Sant Miguel. You have followed route 2 and part of 4 on the linked map

After completing the climb from La Frita, you arrive at an obvious flat area and a 4-way trail junction. Cobblestone roads head down and west back to your starting point and up and south over to the top of the St Joan funicular (the completion of route 4). Take instead the dirt/stone path to the southeast, again signed for Collbato; route 5 on the map.

The direction of this path gradually changes to the south west as you begin to traverse the south side of the massif. This is the "Cami de les Bateries". During the Peninsula Wars of the early 1800's and in order to command the high ground on the approaches to Barcelona, Napolean's troops established artillery high on the south flanks of the massif above Collbato and the route now followed by the A2 Autovia. The construction and supply road used to place and maintain the guns now forms the walking path on this side of the range. Probably as a result of the southern aspect, the mountain flora along this part of the route are the best I saw on the massif.

After 45-60 minutes of traversing the south flanks of the range a side trail signed for St Joan appears. The main trail heads down to Collbato. It's a stiffish 20 minutes uphill from here to the derelict St Joan hermitage. The pinnacles above the hermitage are a popular rock climbing area.

From the hermitage walk 5-10 minutes downhill on the paved road to the top station of the St Joan funicular. There's a small natural history museum, a drinks machine and some sunny benches to enjoy while taking a break. You've now completed route 5 on the map. Unfortunately, you'll have to put up with tourists who come up on the funicular for the view down to the monastery.

From the lower level of the funicular station find the obvious path heading southwest; route 3 on the map. This takes you in under an hour to the hermitage of St Jeroni and through some of the most impressive rock formations in the range. Above you to the south are "La Gorra Marinera", "Les Magdellenes" and "La Gorra Frigia" and across the valley to the north "El Cavall Bernat" and the pinnacles above the Sant Salvador hermitage. Be prepared to spend more time taking photos than walking on this bit.

Just before reaching the Sant Jeroni hermitage take note of a path going down and to the right and signed for Pla dels Ocells and Monestir. This is the return route.

From the Sant Jeroni hermitage take the concrete highway to the summit in about 10 minutes. If you're lucky, you'll be between groups and have it to yourself (as I did). The drop off to the north down to the Llobregat valley is truly spectacular as are the other vistas when the air is clear. Unfortunately when I visited it wasn't and my only view of Barcelona was the industrial smog hanging over it. The Pyrenees and Mallorca were out of the question.

From the summit retrace your steps to the hermitage and then down to the trail junction noted above. Turn left and head down under La Cavall Bernat and the Sant Salvador pinnacles that you noted on the way up from the other side of the valley. Shortly after passing Pla dels Ocells, you encounter hundreds more concrete steps that take you down steeply to the Placa de Santa Maria and your starting point.

At the end (or beginning) of your day allow a little time to visit the 12th century wooden sculpture of The Black Virgin, "La Moreneta" (open 8am-10am), to see the world famous Montserrat Boys Choir who give recitals everyday in the basilica at 1pm and 7pm or just simply to take in the opulence of the basilica itself.

The basilica from the SE
The massif can be easily visited as a day trip from Barcelona. However, I would urge particularly first time visitors to spend at least one night within the monastery precincts. After the hordes have gone - from about 6pm onwards - you will have the place practically to yourself. I'm not a big fan of developments in the mountains but if they've got to be there (and in Europe they do) then let Montserrat serve as the ideal example. The basilica blends effortlessly into the pinnacles that surround it and in the evening, when the tourist hustle and bustle has faded away, a sense of peace descends, the like of which I have seldom, if ever, experienced. Oddly enough, the buildings enhance rather than curtail this atmosphere. Usually a cynic in such matters, I was surprised in spite of myself.

Walk 300m up the cobblestone road from the lower station of the St Joan funicular to find the only camping area allowed on the massif. It opens from Easter Sunday to October only. Reservations are highly recommended. Phone 93 877 7777

The Abat Marcet Cells are moderately priced, simple but fully equipped apartments with kitchen, bathroom and telephone. Use the same number for reservations as for camping.

The only full service hotel in the monastery is the Abat Cisneros. If you want to treat yourself to a couple of nights in the lap of luxury amidst all this natural and man-made splendour, this is the place for you. In fact, it's cheaper than you might expect. €90 Gets you a lovely room for two overlooking the Placa de Santa Maria and the Basilica and includes dinner and breakfast. For more details, visit the link below. 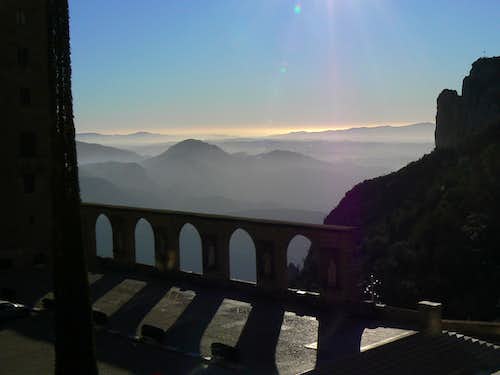 Early morning view from your room at the Abat Cisneros

None. Just your parking fees if coming by road.