THE MAP BELOW IS REPRODUCED FROM THE EDITORIAL ALPINA ORIGINAL 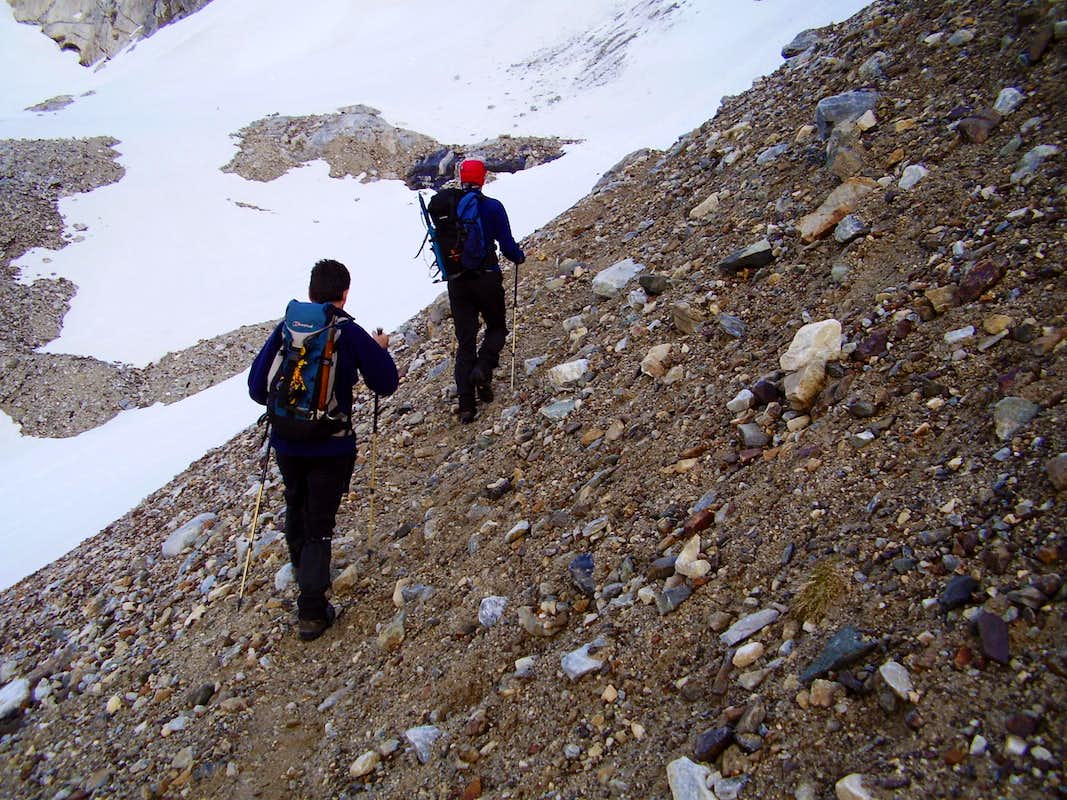 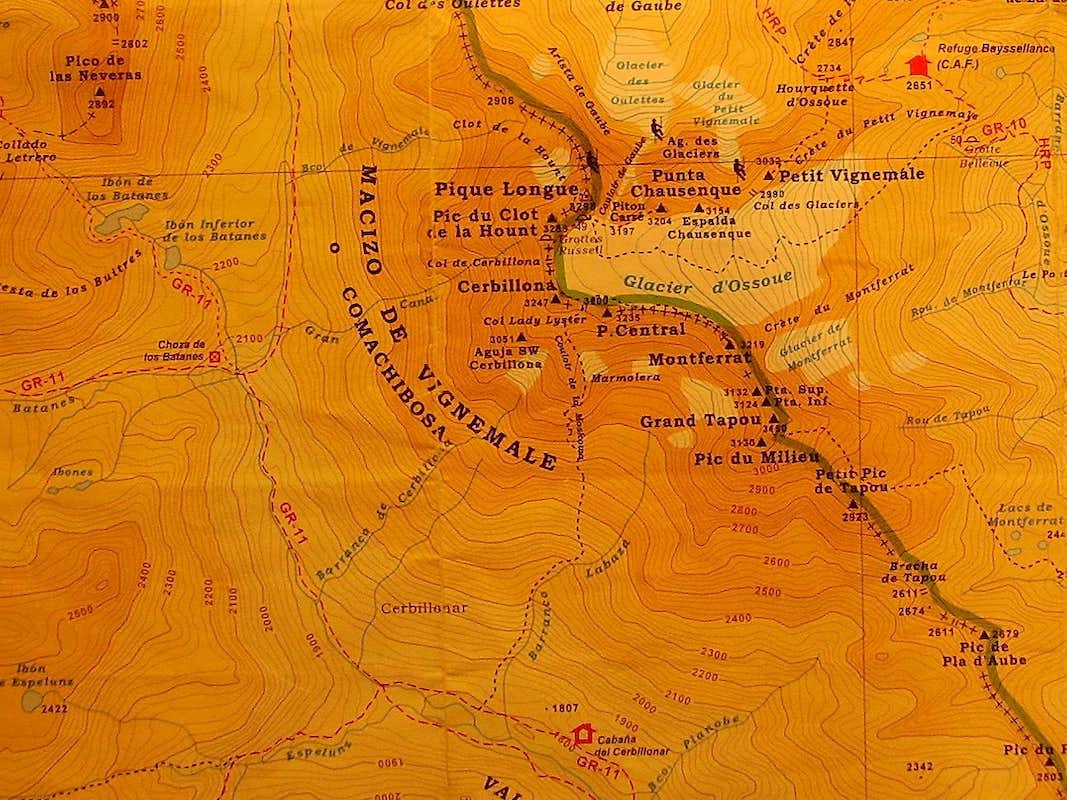 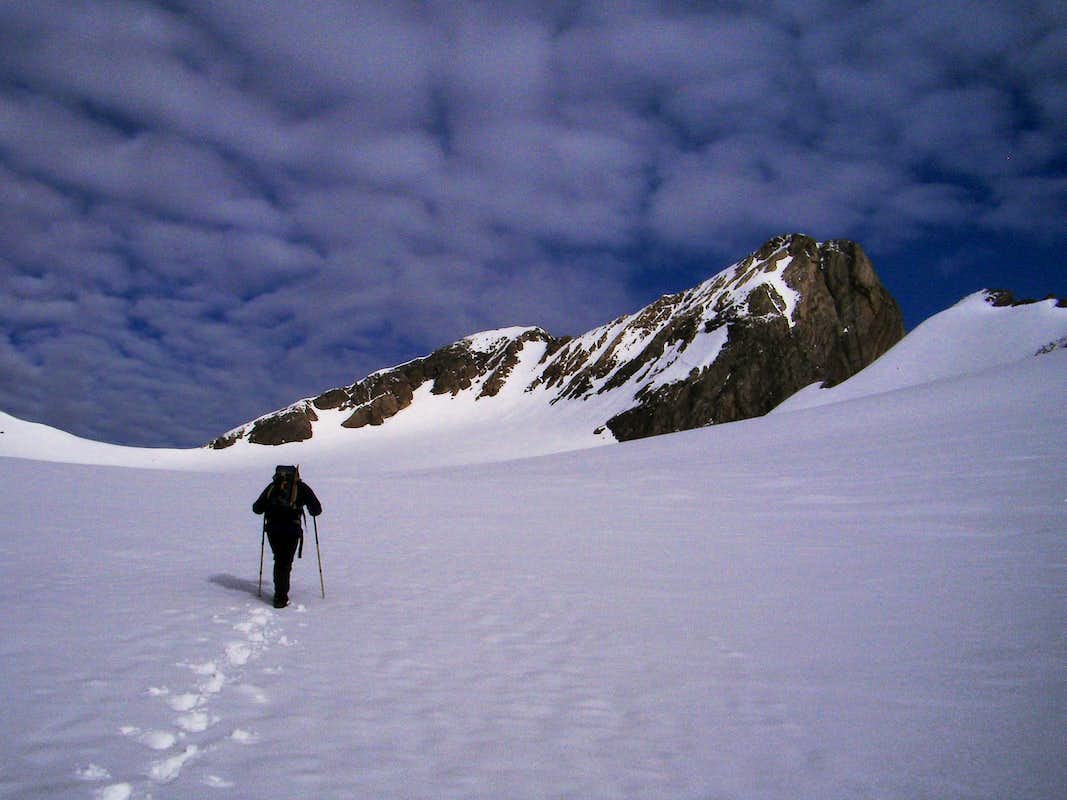 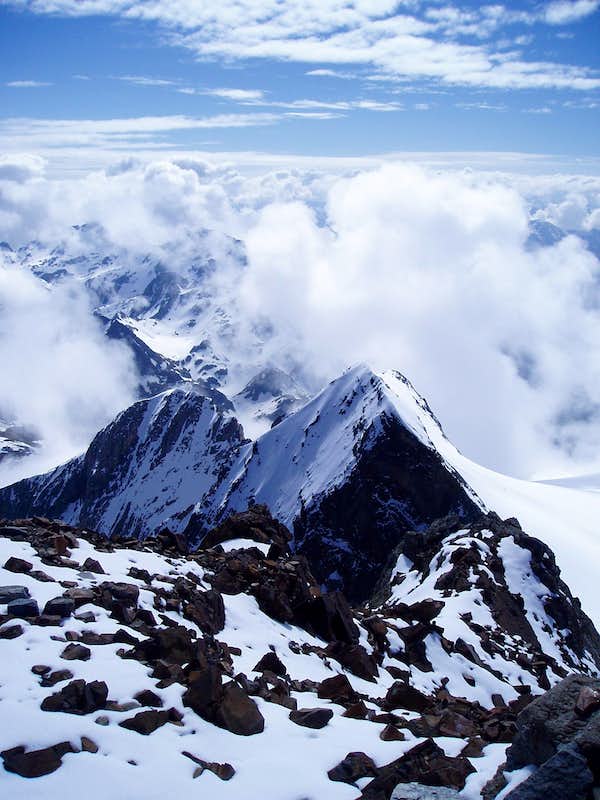 Grand Vignemale or Pique Longue at 3298 metres is the highest peak in the French Pyrenees and is situated in the south west of the Parc National Des Pyrenees close to the border with Spain. Due to its height and central position in a semi-circle of lower peaks, it is bounded to the east by the contained U shaped valley that forms the Glacier d'Ossoue. The glacier is retreating like many others due to climatic changes but is still an impressive sight.

The first ascent of this well-defined mountain was by Henri Cazaux and Bernard Guillembert in 1837.

(see Comments below for alternative 1st ascent) Ascents can be made from bases on both sides of the border, these being Cauterets and Garvarnie in France and Bujaruelo in Spain. 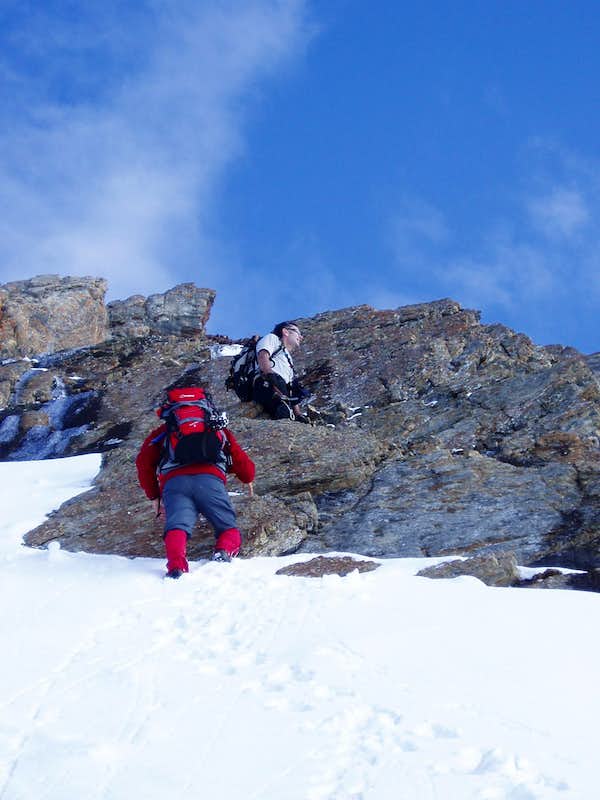 Summit rocks of Vignemale
The area in which Vignemale is situated is very accessible but largely unspoilt. In addition to the many mountains that form the frontier and the spur branching from there that is the retaining wall for the glacier, are a series of verdant valleys that totally surround the heights. It is a paradise for all outdoor sports. 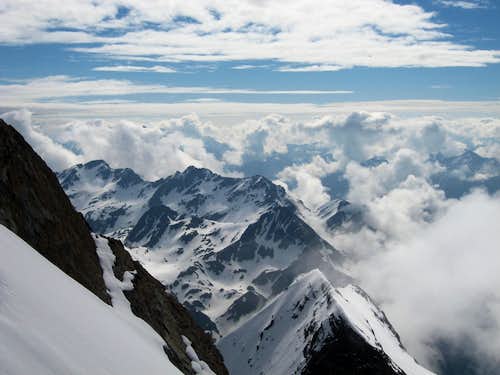 View from Vignemale summit
The Vignemale 'voie normal' follows the route of the first ascensionists over the Glacier d'Ossoue and up gently angled slabs of rather loose rock to the frontier ridge and then up a few metres onto the summit. The time required to do the normal route is around three to three and a half hours from the Bayssellance refuge and about 2 hours on the way back to the refuge (depending on snow conditions and method of descent). The dotted line on the map from the Refuge Bayssellance to the summit of Pique Longue clearly illustrates the normal route. 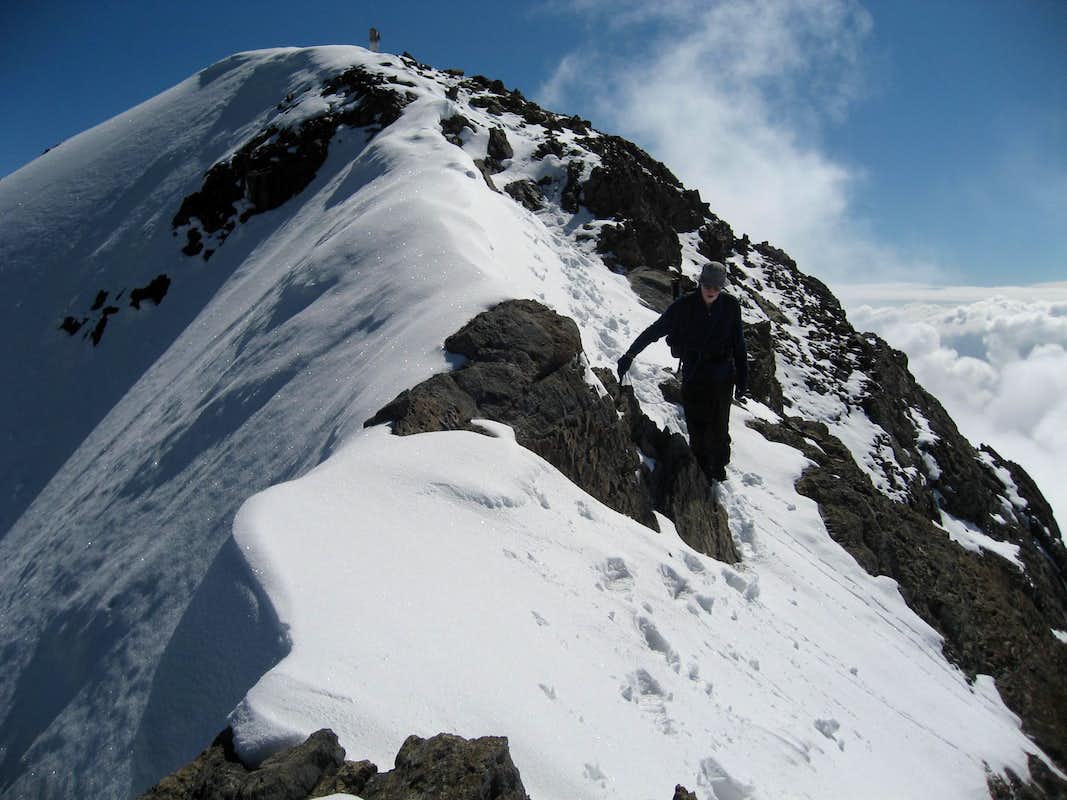 Access from the French side of the border by road is from the East-West autoroute E80 (Bayonne to Toulouse) and the National road N21 via Lourdes and the D821 / D920 to Cauterets or the D921 to Gavarnie. There are airports at Pau and Toulouse. On the Spanish side, travel by road from Pamplona to the west of the region via the N240 / N330 and the N260 to Torla then via a short local road to Bujaruelo or from Zaragoza south of the region via the N330 to Huesca and then the N260 to Torla. Airports at Pamplona and Zaragoza serve the area. For those who aspire to travel with a very low carbon footprint, there are two long distance paths that pass close to Vignemale, GR10 in France and GR 11 in Spain.

There is no specific red tape, no permits are required for the ascent from either France or Spain. There are of course certain rules of conduct in the National Park.

Camping and other accomodation 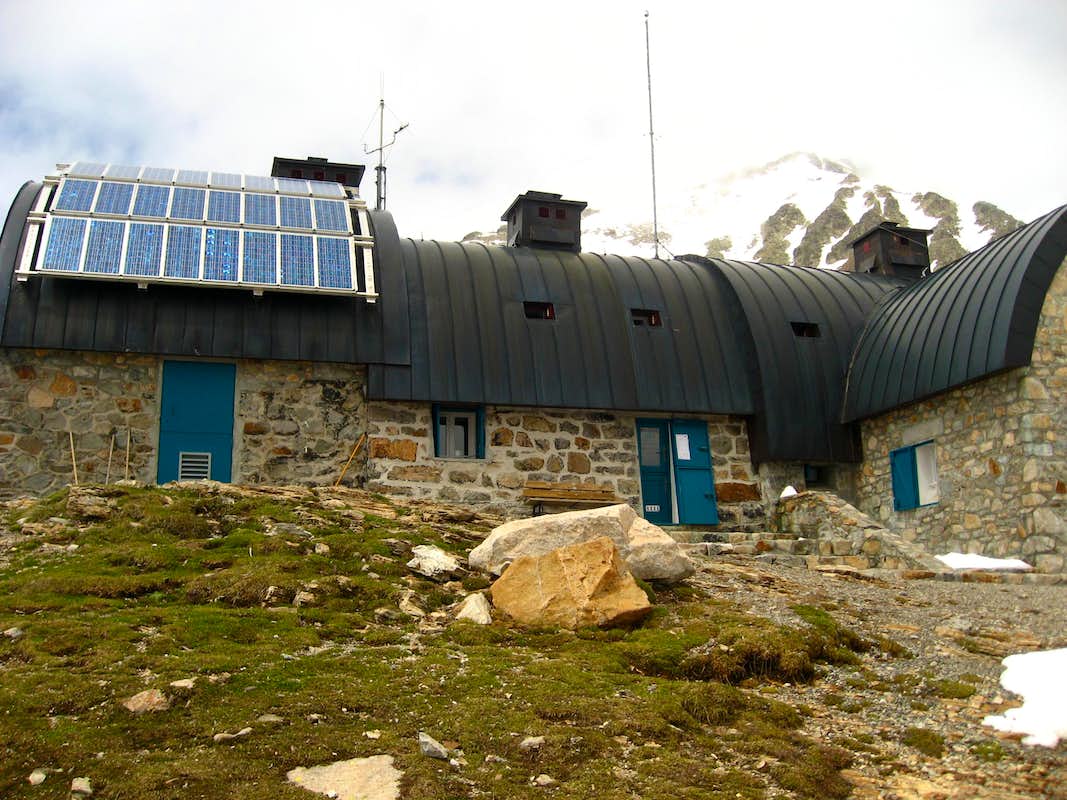 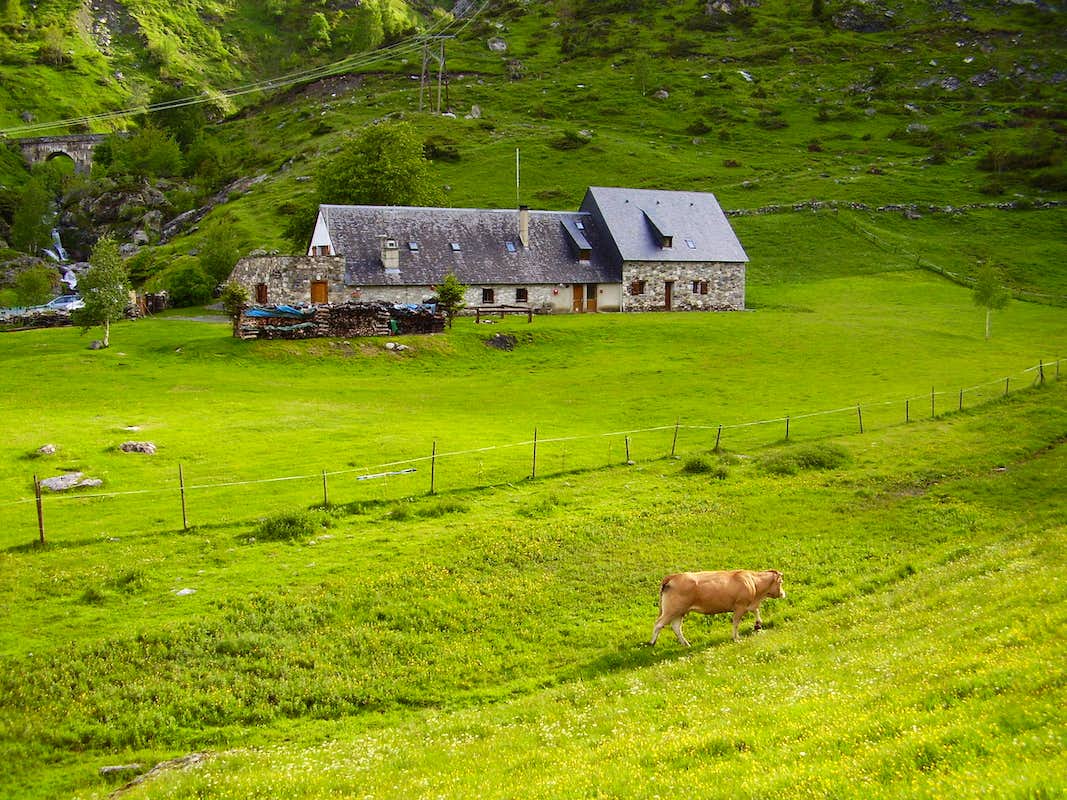 Refuge de Grande Holle
Campsites are plentiful in the area particularly in Gavarnie and Cauterets in France and in Bujaruelo in Spain. Wild camping is possible as water is readily available in the area, however in the National Parks camping is normally not allowed, although bivvying at night is generally permitted at high levels providing tents are taken down early in the morning. (Check locally with rangers to determine current rules) Hotels, Hostals and Refuges abound on both sides of the frontier. Accomodation does become scarce though during the peak seasons so pre-booking is advised. Of particular note is the Refuge Bayssellance, at 2651 metres the highest hut with guardians in the Pyrenees, this is owned by the French Alpine Club (CAF) and is ideally situated for an ascent of Vignemale via the Glacier d'Ossoue. There is also another refuge owned by the CAF, this is the Refuge La Grange de Holle that is located close to the town of Gavarnie. From personal experience, I can commend the hospitality to be found there.

the name is Grand Vignemale and not Grande Vignemale. You must attach the peak to its massif: Vignemale Massif (parent)

Hi Rafa, thanks, I'm mixing my Spanish and French obviously. I will make the changes you suggest. cheers Johnnie

actually the coordinates are wrong, the peak appears near of Breche de Roland Try this coordinates: 42.77463 -0.14527

Hi Rafa, thanks for the check, I have tended to roughly position the arrow on the digital map rather than entering the coordinates directly. A bit lazy I guess. I will correct it. Gracias Johnnie

The first documented, "official" ascension of this peak was by English landowner and traveler Anne Lister and three local guides in 1838.[2][3][4] Some man came up after her and tried to lay claim about being first, but he was met by her and her lawyer and one of the guides that got bribed by the man.

Hi Sheridanne, Thanks for your comment. I've added a note to the text to indicate your alternative 1st ascentionist, cheers Johnnie