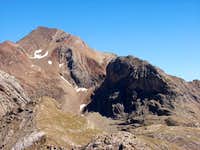 Posets
Posets is the second highest peak of the Pyrenees. This mountain is in Posets-Maladeta's Park same as Aneto ( 3,404 m ), the highest peak of the mountain chain.
The easier route (difficult F) is Eriste's valley, a long route of 6h (4h from mountain hut of Angel Orus). The others routes are: Estós (difficult Fsup, 4h30min + 2h10min to mountain hut; by the small glaciers) and Biadós (long). For the mountaineers with experience in rock-climbing the ridge Espadas-Posets is one of the most classical of Pyrenees with stepcrossings of grade II+.This mountain it's not so popular like Aneto or Monte Perdido, because the tourist generally don't known about it, and the people who climb this mountain in summer are generally mountaineers. It's a nice climb with more tranquility for enjoy of the high mountains of Pyrenees without a lot of people surround us. In the last years more and more mountaineers climb the normal route from the Refuge of Angel Orús and it's more popular each year thanks to this perfect localization of the Hut.Name: Posets for the "pocets" (wells) of west side. Other name: Llardana for the aspect "burned" of east side.First climb: It was by Halkett with P. Redonnet and P. Barrau on 6 August 1856, following the Ruta Real (Eriste-Forcaus). 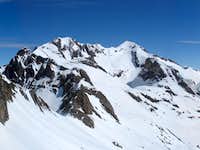 No permits required.
Very important: on summer in the last years you must park in the village of Eriste taking  a bus to trailhead in casada de Espigantosa.
The snow remains on summer in Canal Fonda's passage in route normal (Eriste). It's necessary the use of crampons and ice axe in a few of times even on summer (always in early spring). A lot of people they don't carry the crampons and generally they climb the mountain on summer across the Canal Fonda but if you don't know the conditions for the day it's a good recommendation for don't back another day (on renting crampons in hut of Angel Orús in case necessary).For the route Estós by the two small glaciers is the same.This mountain is not very difficult, only it's necessary a good preparation in the normal routes.The route of ridge Espadas-Posets is exposed and grade PD (rock-climbing II+ or III-) and the use of the rope it's advisable for people without experience.

June to September. It becomes very hard in winter. The storms at the evening are frequent in the Pyrenees and for this reason the best time to climb is in the morning.