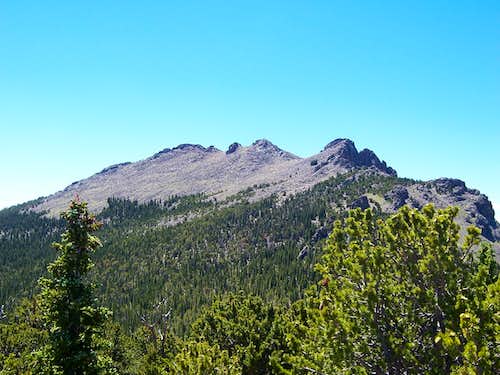 Twin Sisters Peaks, thanks largely in part to its ease of access, solid class-1 trail to the summit and stellar views of Estes Park and the Longs Peak Cirque enjoys a substantial amount of popularity almost year round; at times, more so than Long's Peak.

I've had trouble pinpointing the origins of the name precisely. In my readings, I seem to be coming upon two possibilities for the 'Twin Sisters' moniker. One being, that the mountain was simply named as is in accordance that the summit is gemini in nature and thus, having 'sisters' as a referral, even colloquially, proved enough to stick as a formal name. The second possibility is in reference to a pair of sisters who were botanist's in the early part of the 1900's associated with the Estes Valley.

On March 7th, 1907, Ellsworth Bethel wrote the Geographic Board in Washington that the name 'Twin Sisters Peaks' was already well-established as the mountain was also informally referred to as Lillie Mountain.
A bit later in 1915 (same year that RMNP became a National Park), Bethel changed his mind. He wanted this mountain named Tahosa Peak, "...not Twin Sisters nor Lillie Mountain." He wrote stating that the peak was only viewed as a set of peaks from a certain angle and so the name should be aptly changed. As we now know, Tahosa was rejected and Lily Mountain (not Lillie) was attributed to the lower peak just across the valley akin to Lily Lake.
However, it was just after 1911, that the Geographic Board decided to permenently keep the 'Twin Sisters' name regardless and to the chargin of locals.
On May 8th, 1914, the Forest Service ended up shelling out a few hundred dollars in putting in a trail, a lookout station and a ranger cabin atop Twin Sisters Mountain. By October 1915, the trail was finished.

Enos Mills, whom is largly responsible for the creation of RMNP in 1915, envisioned the park initially to be much larger then what it currently is. A catankerous and firecly intelligent man if not a bit short tempered, wanted 'The Park' to extend south to Mt. Audoban, east to include the Tahosa Valley and Twin Sisters and further north to swallow up a good portion of the current Commanche Peaks Wilderness. Of course, this didn't happen but in 1917, Enos Mills did get a small reprieve as the Dept. of the Interior decided to annex the Twin Sisters Massif; similar in nature to the Canyonlands' jurisdiction over Blue John and Horseshoe Canyons in central Utah.
Lastly, a forest fire erupted on the Sisters' Western flanks in 1929. It only burned a hundred acres or so but with all the private property and cabins in the area, it raised many alarms.

Twin Sisters Peaks offers a good choice to acclimize for hikes/climbs up Long's Peak, Pagoda, Chief's Head or Mt. Meeker. as the trail is easy to follow and round trip time will only set one back a couple to three hours. Twin Sisters offers a lot of reward for little commitment.

→ → → → There's always been a lot of confusion over this but once one arrives at the summit plateau, there is an eastern and a western summit. Twin Sisters is a gemini summit. THE EASTERN SUMMIT IS THE HIGHEST POINT. The western summit closest to the old weather station IS NOT the true summit. It's about ~25 feet lower.

The turnoff for Twin Sisters is 7.8 miles south of Estes Park on Hwy.7 or South St. Vrain Avenue on some maps. There is a small dirt parking lot on the east side of the road directly opposite of Lily Lake. Turn left (if driving south) onto Serenity Lane (marked on some maps) passing the small dirt parking area staying to the right. The road will switchback once or twice before ending in a cul-de-sac.
Parking is allowed only on one side of the road.

The road is gated and posted with 'no parking' signs at the top.
It's rare when there isn't vehicles already parked there. Expect company! 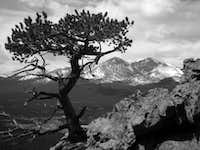 Twin Sisters Peaks & 'South Sister' are technically under the jurisdiction of Rocky Mountain National Park. For good and ill, this strictly limits the things one can do while on the trail or enjoying the vista's from the summit.
Some obvious things are no pets are allowed in the park with the exception of service animals. However, I do have it on good authority that if this is the case, be prepared to show documentation that your animal is indeed a service animal. Having volunteered with RMNP for two seasons, rangers do and will check and 'emotional support' does not cut it.

Firearms, thanks to a recently passed bill are allowed now within the confines of the park permitted one has permits for them.

There is no camping allowed near the trailhead for Twin Sisters or overnight sleeping in one's vehicle.

With the exception of the weather station at the summit, the bulk of Twin Sisters is under 'wilderness' status and where there is an overlap of rules between 'wilderness' and federal regulations of 'The Park', the greater of the two will take precedence over the lesser.

Because this peak has a maintained class-1 trail all the way to its summit, anytime one has a few hours to spare is a good time to hike!
Winter, Spring, Summer or Fall. Just keep in mind the usual afternoon thunderstorms and showers that summer brings.

I find Fall and Winter to be the most scenic times in terms of aspens and sunsets. Plus, you can find plenty of solitude and quiet! Sometimes the mountains are best enjoyed under a blanket of white & solo. 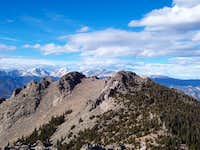 Since Twin Sisters Peak was annexed by Rocky Mountain National Park in 1917, overnight stays and camping are not allowed at the Twin Sisters Trailhead since there is no formal campground located there. All regular NPS rules apply.
The closest campground to Twin Sisters is just up the road at the Long's Peak Campground at 9,400ft. This campground is open year round and there are 26 sites. Camping fee's are $20 during the peak summer months with a 3-night maximum. During winter, the fee is $14 and there is no limit on consecutive nights stayed;there are no restrictions either.
Only tents are permitted and the campground is first come, first serve. Each site has a picnic table, sleeping pad (site) and a fire grate. Spots are self-registered and the water is turned off from October to May seasonally. RV's are not allowed.
NPS campgrounds beta

Meeker Park Campground is located just west of Highway 7 at an elevation of 8,640 feet. This camping spot is roughly ~4 miles south of Long's Peak and about ~12.5 miles south of Estes Park. This campground is predominantly wooded with evergreen, pine and aspen. There are 29 sites in the campground. Ten are suitable for RV camping and 19 are suitable for tents. Each site has a picnic table and fire ring or grate. The maximum vehicle length that can be accommodated is 30 feet.
There is no water available in the campground and just three portable toilets for restrooms. Reservations are not accepted for this campground. There is a length of stay limit of 14 days. The season for this campground normally runs from mid May through mid September, depending on the weather. Meeker Park Campground is located within the confines of the Boulder District. For further information on this local, call: 303.541.2500

The Baldpate Inn is another option for those wanting to stay closer to the Twin Sisters/Long's Peak area (read: outside Estes Park).
The Inn which, has been in business for upwards of 95 years is loaded and steeped in history. This is a pricier option. Rooms typically start around $90 and average $130 per night. The Baldpate is accessed via the Twin Sisters turn-off (left: Fish Creek Road, Right: Serenity Lane) opposite Lily Lake.

Weather is always unpredictable. It's not uncommon to start the day with great, bluebird skies only to end the day under storms, rain and possibly even graupple or snow.
Conditions can and do change rapidly in the higher mountains.

It's always prudent to bring and pack multiple layers. Even a light pair of gloves once on the summit come in handy.

And as with the altitude, keep in mind, past 10,520ft is equal to roughly 2 miles high from sea-level. Whether it's cloudy or not, the UV rays will sunburn hikers and climbers. Most peaks in Colorado are over this altitude. Bring sunscreen and as a rule, expect changing conditions.
Normalcy is the exception.

Twin Sisters is popular enough that the snow on the trail is packed by the traffic. I was able to walk up the trail without snowshoes even though the snow was up to a foot deep off of the trail. The packed snow is slick enough that trekking poles are pretty much required to help with staying upright. Gaiters are also a really good idea, especially in late afternoon when the sun can melt the top layer of snow into mush. This is in late November during a warm, sunny day.

The only postholing was on the summer road while walking to the trailhead from the Lily Lake visitor center, and in a few spots just below the timberline. Above timberline, the wind keeps the terrain pretty clear of snow.

Twin Sisters also offers lots of technical rock climbing. The northern part of the mountain has a several large rock buttresses that can be seen from Estes Park. This is known as the Crags and offers some excellent multipitch trad climbing. The area isn't visited very often which does not reflect on the quality but more on the approach. There are several approaches but no road side cragging here. Both of the local guide books do an excellent job of covering most of these routes which were put up in the 70's and 80's. Don't expect an bolts, maybe some pitons but do expect some dicey gear and sandbag ratings.

Nice concise page, but with a good amount of info. These are purely suggestions: 1) It might be nice to use a photo of Twin Sisters itself for the main photo for the page. 2) It might be a good idea to state that in "winter", one must park by Lily Lake, as the road up to the trailhead is closed. Winter means until the snow is gone (it was still closed yesterday, April 28.) Thanks for doing this page!