Bidean nam Bian (Pronounced: Beetyan nam Beean) is most definitely, as described by many, the Queen of Argyll. Standing at a height of 1150m/3773ft, Bidean nam Bian (Munro No.23) is the highest of all the peaks in the Glencoe region, however by stark contrast, its summit is one of the smallest. This is reflected in the translation of the mountains name. The word Bidean meaning pinnacle and nam Bian meaning of the mountains, thus giving us the name Pinnacle of the Mountains. Its vast overall size is comprised of a complex array of ridges and peaks and it is these surrounding subsidiaries that complete the naming of the peak. Although these surrounding peaks have names in their own right, the entire massif has gradually adopted the tag of Bidean nam Bian. The average visitor to Glencoe will probably never clap eyes on the summit of Bidean as it is generally hidden from sight from most viewpoints. From the A82 road that runs through the heart of Glencoe and the car park close to the Allt na-reigh the peak is obscured from view by the famous Three Sisters of Glencoe and the pointy peak of Stob Coire nan Lochan.

This mountain is quite complex by Scottish standards and it may take several visits to truly appreciate its full complexity. It has three fairly narrow ridges that emanate north westerly towards Stob Coire nam Beith, north easterly towards Stob Coire nan Lochan and south easterly to Stob Coire Sgreamhach. From the ridge to Stob Coire nan Lochan two further ridges stretch out, dropping steeply on all sides to the glen floor, that of Aonach Dubh and Gearr Aonach (two of the three sisters). From the summit of Stob Coire Sgreamhach, on the south easterly ridge, a further ridge extends out into the glen (the first of the three sisters). It's a long ridge, hence its name being Beinn Fhada (Long Hill), that is more accessible than its siblings and gives the hill walker the possibility of a more varied route than the general ones used in ascent.

The most common routes of ascent run through the three great corries; Coire Gabhail (The Lost Valley), Coire nan Lochan and Coire nam Beithach. The Lost Valley is most definitely the most famous of the three corries and also the one that you will find is the busiest, especially in the summer months, when it is besieged with many tourists. The Lost Valley is hidden from view by a large cluster of trees, with a steep climb up through them revealing the valleys surprisingly flat and lush characteristics. All these aspects combined to provide the MacDonald clan of Glencoe with the perfect spot for stashing the cattle that they allegedly and regularly used to rustle from their neighbouring clans.

The route up and through the long lengths of Coire Gabhail eventually leads to the bealach between Sgreamhach and Bidean. The final stages to the bealach are covered in scree and the many feet trampling up and down over the years have caused serious erosion, making the going underfoot quite difficult. From here a beautiful ridge walk leads to the summit. The route through Coire nan Lochan follows the Allt (river) until reaching a small group of lochans. Carry on up either the north or west ridge to the summit of Stob Coire nan Lochan and along the northeast ridge to Bidean, admiring the views of its north face in the latter stages. The last route up Coire nam Beithach follows its Allt, climbing steeply until reaching the summit of Stob Coire nam Beith. From here travel along the northwest ridge, which carries a narrow snow arête under winter conditions, until reaching the summit.

Bidean nam Bian also provides some fantastic rock climbing and general mountaineering opportunities, with the Diamond and Church door buttresses being amongst the biggest draws that the peak has to offer. The lucky few that developed the routes up these having the pleasure of waking in the shadow of the mountain and then venturing up upon it to develop new routes. Among the first men to develop these routes was Norman Collie in 1894, who had only just earlier in the year established the route known as Tower Ridge on Ben Nevis, obviously had a keen eye for identifying any weaknesses in the rock. 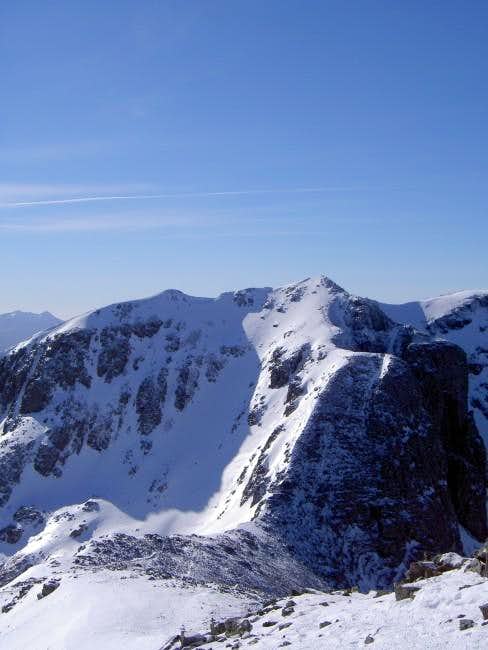 Bidean nam Bian and its northeast ridge. (Photo by: markradford)

For arriving in Scotland and making your way to Glencoe, the best airports to arrive in are;

From Glasgow take the A82 road via Loch Lomond northbound direct to Glencoe.

From Inverness take the A82 southbound via Fort William direct to Glencoe.

From Edinburgh take the M9 to Stirling, then take the A84 Callander road, becoming the A85 until merging with the A82 northbound road at Crianlarich then on to Glencoe.

Traveline Scotland - A one stop shop for all of the above

The best place to base yourself for climbing Bidean nam Bian is in or around the Glencoe area. Below is a selection of available accommodation;

Wild camping is totally legal in Scotland and can be done in various locations in Glencoe. This is due to the Land Reform (Scotland) Act 2003 that was mentioned earlier. Here are some of the basic rules that should be adopted when wild camping; 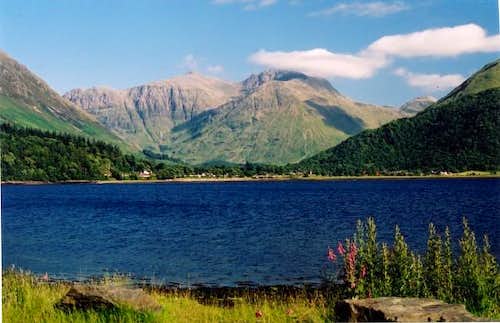 Bidean nam Bian is a popular destination in the summer months when most of the winter snow has subsided and at weekends a great wealth of people will be found on and around the many ridges and corries. The Lost Valley of Glencoe is also a popular destination for the tourists to visit so expect this area to be busy in the afternoons. Generally between the months of May to October there will be little snow found, although any still found will mainly be in the gullies or on northern facing sides of the peak. 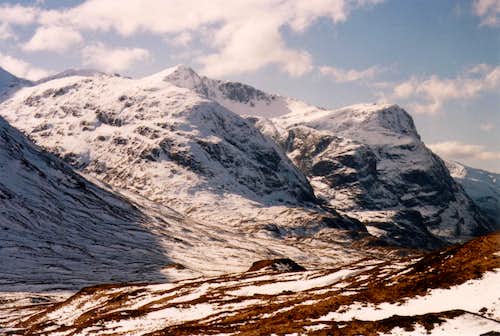 In winter, climbing Bidean nam Bian is a serious undertaking and should not be attempted by the inexperienced. Whatever you do, do not underestimate this mountain as it has claimed many lives over the years and will unfortunately continue to do so. The amount of daylight hours during the winter months in the area is also limited and you should ensure you have allowed enough time to be completed before the sun sets. There is a multitude of excellent climbing routes on Bidean and this is one of the many draws that the mountain has to the winter mountaineer.

The weather conditions in Glencoe can alter rapidly and you should ensure you are fully prepared for all weather eventualities. The following websites will provide invaluable information on the expected conditions for your planned trip;

As stated, the peaks in the Glencoe region sit close to the west coast of Scotland. This can have a strong affect on the conditions on the mountains and it is a regular occurrence for Glencoe to experience its very own weather system and for it to totally differ to the weather in the nearby towns and villages. More detail can be found on the reasons for this occurrence on Proterra's article: Mountain meteorology of Scotland.

The Corbetts and Other Scottish Hills by Rob Milne & Hamish Brown

The Grahams and The Donalds by Rab Anderson & Tom Prentice 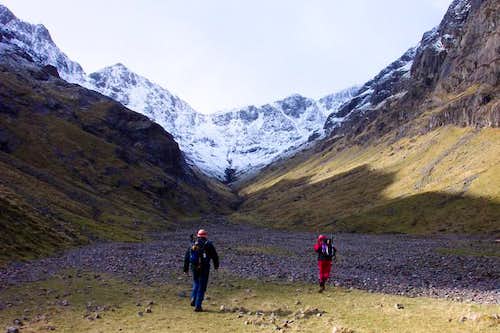 Walking through the lost valley. (Photo by: mountainmanjohn)

Heading For The Scottish Hills