Tehipite (tə hip’ i tê) Dome holds the distinction of being the largest dome in the Sierra Nevada, though the nearly continuous forest and low profile when viewed from the north often mean it is unseen by climbing parties until they are almost immediately upon it. It remains a daunting site from Tehipite Valley below, and the views from the summit are stunning in all directions.

The Dome is situated at the southern end of Kettle Ridge, 1.7 miles inside the western boundary of Kings Canyon National Park. It rises over 3,500 feet directly above impressive, glacially carved Tehipite Valley and the Middle Fork of the Kings River.

Tehipite Dome sees relatively few visitors due to its lower elevation, its remote location, and the long approach almost entirely through the forest requiring elevation gain in both directions. Those that come, however, often enjoy greater solitude than can be obtained elsewhere in the Sierra. As of late 2009, the previous 10 years saw fewer than 30 parties log their accomplishment in the register. Tehipite Dome is listed among the 35 peaks of the Sierra Peaks Section’s Mountaineer's List, and this is the motivation of several of its ascents. Nearby Spanish Mountain is also on the SPS List, so some parties climb these two peaks together (usually, but not always, as an overnight trip).

The easiest and by far most commonly used route to the summit is the exposed, class 3 North Ridge. Technical ascents from the south ranging from 5.9 and up have been climbed, but with much less frequency. 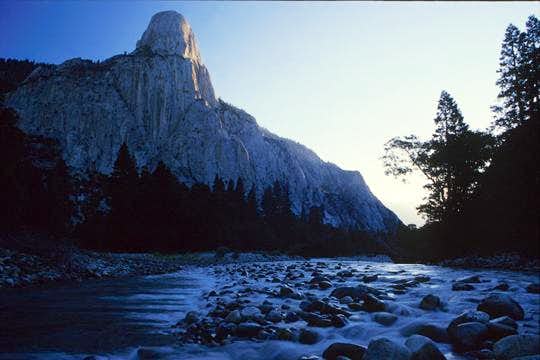 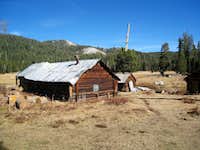 Tehipite Dome is best accessed from either the Rancheria or Crown Valley Trailheads in Sierra National Forest. This is true whether you are climbing the North Ridge or one of the big wall climbs from Tehipite Valley (other approaches to Tehipite Valley are either exceedingly long or would require a dangerous crossing of the Kings River). Both trailheads are accessible by 2WD cars.

Rancheria Trailhead (36.97548° N, 118.95607° W)
Three miles past Wishon Reservoir bear left at the fork in the road, and 1.7 miles from the fork turn left and pass an open gate. As you pass the gate the pavement ends and you reach the trailhead 2.3 miles from McKinley Grove Road. There are bear boxes and ample space for parking and camping at the trailhead.

Crown Valley Trailhead (36.95849° N, 118.96801° W)
Three miles past Wishon Reservoir bear right at the fork in the road. Continue on McKinley Grove Road another 1 mile to the trailhead.

Trip statistics for North Ridge from Rancheria Trailhead:
13.5 miles one-way, 2900 feet total elevation gain out plus another 2800 on the return.

Trip statistics for North Ridge from Crown Valley Trailhead:
13.9 miles one-way, 3700 feet total elevation gain out plus another 2700 on the return.

The trip from Rancheria or Crown Valley Trailhead is very straightforward with a topo map and compass. The trails are generally obvious, with the several intersections well posted- typically on nearby trees. Simply follow the signs towards the features in your direction, these primarily being Crown Valley and Crown Creek. The only exception is the immediate vicinity around Crown Creek, where the trail is faint. It can be relocated by hiking a short distance directly uphill and then traversing in its direction. Crown Creek can also be a difficult and even risky crossing during the peak spring runoff, but in other seasons will pose no difficulties. In fall you are unlikely to need to wet your feet.

See the North Ridge page for details of the route beyond the Kings Canyon Park boundary.

If heading to Tehipite Valley for one of the more technical routes, turn south at Johnson's Cow Camp in Crown Valley.

Though the vast majority of visitors reach Tehipite Dome's summit from the North Ridge, it also offers technical routes and wall climbs on the south side above Tehipite Valley. 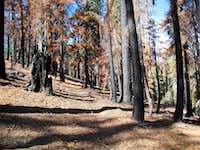 An area impacted by the Tehipite Fire

On July 14, 2008 a lightning strike started the appropriately named Tehipite Fire 1.4 miles southwest of Tehipite Dome on the north canyon wall. This fire burned slowly for six weeks before expanding in September to eventually cover a total of 11,596 acres before burning out in late October. There are many areas that are either eroded or spotted with fresh seedlings, and as you follow the trail you will see a forest in various stages of recovery. This area covers the last 5 miles of the approach, from before Deer Meadow all the way to the dome.

The USFS and NPS monitored and allowed the fire to burn to consume the significant fuel accumulation on the forest floor for its ecological benefits, and due to firefighting safety concerns created by the remoteness, inaccessibility, and steep terrain. The Tehipite burn area had missed several fire cycles and previous to this event, and accumulated debris and lack of maintenance made the approach trail more tedious. The fire activity changed all that, and it and the fire crews left the trail completely debris free, though now badly eroded (especially on the portion from Crown Creek to the dome). The erosion of the trail is not especially visually appealing, but it does make the location quite obvious once identified on the east side of Crown Creek, whereas before this section was faint and obscure in places.

The effect of the burn has also made any hopes one may have had of bushwacking during the final cross county travel to Tehipite Dome all but disappear. 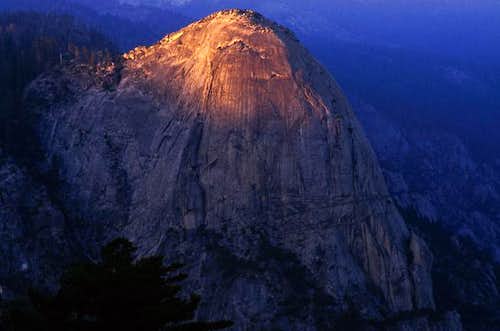 Wilderness Permits:
Tehipite Dome lies in Kings Canyon National Park and most of the approach is in the John Muir Wilderness of Sierra National Forest. No permits are required for day trips but overnight trips require one throughout the year. Quotas are in place year round. Permits can be obtained from the High Sierra Ranger District office in Prather year round seven days a week or at the Dinkey Creek Visitor Information Station during the summer season. Check the Sierra National Forest website for the most current information.

As of 2009, after September 15th the forest service would leave permits in a night dropbox outside the office in Prather if you call to request it on the day of the pickup.

Campfires:
Fires are prohibited above 10,000 feet (this does not affect you unless you want to haul wood up 10,061 foot Spanish Mountain).

McKinley Grove Road is not plowed in the winter, consequently spring through fall are the most realistic times for a visit. The fall is a particularly excellent time, when cooler weather prevails and snow may be an obstacle in other areas. The crossing of Crown Creek is also made easier in late season. 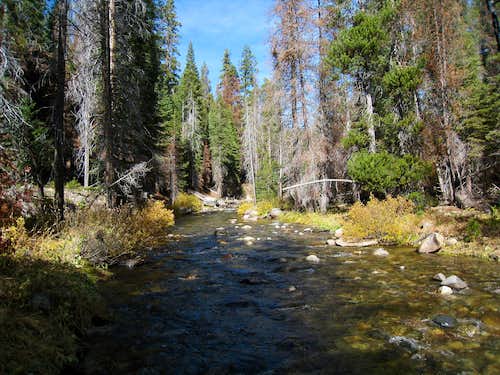 Crown Creek in the Fall

There is plenty of space for roadside camping at the Rancheria Trailhead (two bear boxes, no water or facilities), and it would be a better roadside choice even if starting at the Crown Valley Trailhead. The closest established campground is Lily Pad at scenic Wishon Reservoir, followed by Buck Meadow and Gigantea Campgrounds along McKinley Grove Road (these are 4 miles past and immediately past McKinley Grove respectively).

Backcountry camping can be done just about anywhere near the small streams you cross throughout the trip. Obvious options include Deer Meadow and Crown Creek.

“ ‘Tehipite is an Indian word, and by these people was applied to the massive granite tower. Its interpretation is ‘high rock.’ The accent is on the antepenultimate. The Te is sounded short and blended with hip, which is a combination of short i and short e; the third syllable, i, is short and guttural, and the last, e, is spoken very rapidly and abruptly and pronounced ‘teh’.’ (L. A. Winchell: Manuscript, 1896.)

The valley was discovered by Frank Dusy in 1869. After several visits in the next few years, he succeeded, 1879, in breaking a trail and getting animals down. On this occasion he took the first photograph ever made of the dome. (L. A. Winchell.) Other accounts say that Dusy found evidence of former visitors. (Elliott: Guide to the Grand and Sublime Scenery of the Sierra Nevada, 1883, pp. 15-16.)” - Francis P. Farquhar, Place Names of the High Sierra (1926)

“The name is shown on the Tehipite atlas sheet of 1905. Nothing is known about its origin beyond the fact that it is Indian, probably Mono. Winchell’s interpretation of the meaning as ‘high rock’ (Farquhar) sounds plausible.” – Erwin Gudde, William Bright, California Place Names (2004)