Table Mountain is a remote peak in Sequoia National Park, well recognized by its flat profile among the other peaks of the Great Western Divide. Table Mountain sits north of Midway Mountain and south of Thunder Mountain along the Divide and is one of the 248 peaks listed by the Sierra Peaks Section of the Sierra Club Angeles Chapter. The peak is somewhat unusual among its neighbors as the mountain’s vertical escarpments are capped by a large, relatively flat plateau. The first ascenders, Paul Shoup, Fred Shoup, Gilbert Hassell (Aug 25, 1908) estimated the plateau’s size to be seventy to eighty acres but a closer estimate puts it about half of that (35 acres). This is still roughly equivalent to 30+ football fields or 8 super aircraft carriers. The high point lies at the far northern end of the plateau overlooking the jagged north ridgeline to Thunder.

Table Mountain may have been indirectly named by Clarence King according to Francis P. Farquhar in his book Place Names of the High Sierra (1926), King stated “At one place the ridge between Mount Brewer and Kaweah Peak forms a level table.” Although the name appeared shortly afterward on maps, the peak briefly sported the name Hazen Mountain before officially receiving the designation from the USGS Board on Geographic Names in 1903. Norman Clyde is credited with FAs on three of the routes on the peak. 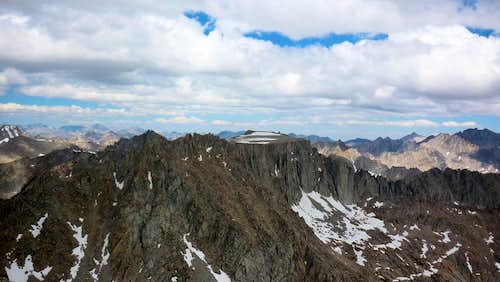 Due to its remote location, Table Mountain can be approached from a number of different directions depending on the itinerary. It’s debatable on what the best approach is but the closest trailhead approach is from Symmes Creek (Shepherd Pass) although Whitney Portal and Onion Valley are suitable (but much longer) entry points to the eastern side of the mountain. The easiest approach to the western side is via Marvin Pass but again, the approach distance is long enough that other options (Reflection Lake or Avalanche Pass) might be worth pursuing.

There are a number of interesting scrambling routes up Table Mountain and many other undocumented routes (from firsthand experience). RJ Secor’s admonishment to carry a rope maybe wise as it’s easy to get off-route.

Everything you need to know about permits, regulations, and driving directions can be found on the Eastern Sierra - Logistical Center page. The parent SEKI page to this page is also filled with great information on the Park’s rules. While overnight hikes require a wilderness permit, day hikes can be done without red tape with the exception of entry from the Whitney Portal. 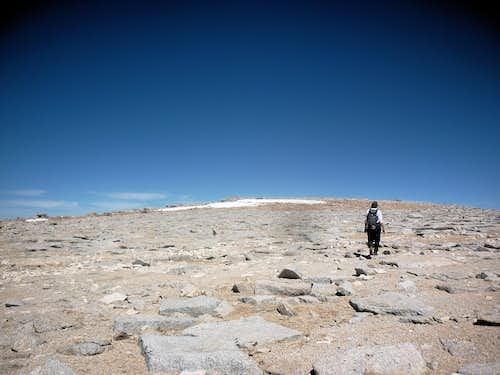 Just a note. I'm pretty sure Kaweah Peaks Ridge is not considered part of the Great Western Divide. By the way, got any more pics? I've never been back in there and would like to see more of this mountain.

Russ and I are sharing this page now and I've updated it based on my recent visit there. Tell me what you think.

Hi Bechtt. The page looks good to me, good job. My only suggestion would be to put another pic as the primary photo. The sunset shot is nice but it seems out of focus and kind of obscure. Later man!

Finally did it with a long shot from Silliman. Thanks for the suggestion. Tom