Mt. Morrison is one of the more notable mountains in the Mammoth Lakes area of the Sierra Nevada.  Its North Face is a spectacular sight when viewed from US395 near the Mammoth airport.  The rock in this area is noted for it's superb coloring in shades of white, yellow, orange, red, and brown.  Mt. Morrison's summit pendant, a lower Paleozoic roof pendant (USGS Professional Paper 1145), is composed of Dolomite and Marble - basically metamorphosed limestone.  The age is Pre-cambrian making it some of the oldest rock in the Sierra.

Mt. Morrison lies east of the Sierra Crest, whose rain shadow prevents the normal precipitation found on Sierra peaks from reaching Mt. Morrison.  Consequently the peak is nearly free of snow early in the summer. A few thin lines of snow/ice can be found on the North Face into the summer.

The rock is very loose, and caution must be exercised when climbing it's routes.  According to Secor, the north side has earned the nickname, "Eiger of the Sierra" (The High Sierra).  The peak sees a moderate number of visitors relative to other Sierra peaks.  The looseness of the rock is the primary detraction, while the impressive front and a short approach are the primary draws which lead to very enjoyable summit views (Thanks spence).

360° panorama from the summit of Mt. Morrison. Click for full size image with labels. 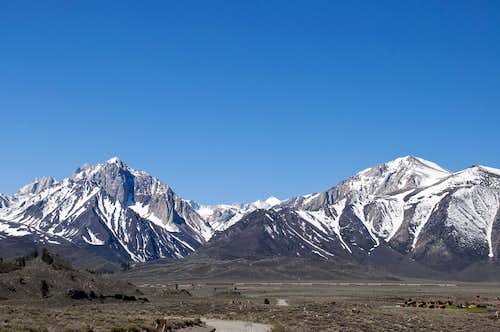 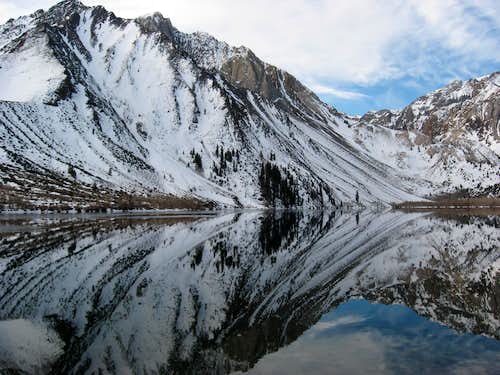 There are no trailheads to Mt. Morrison.  Easiest access is from Convict Lake which lies below the north side, and can be reached from US395 via the Convict Lake Rd, just south of the Mammoth airport.  Convict Lake is a popular recreation lake, primarily for fishing.  The Convict Lake Resort offers year-round lodging, a full-service restaurant and lounge, and general store.  Camping at the USFS Convict Lake campground can be arranged through Recreation.gov.

Convict Canyon, and the western aspects of Mt. Morrison are accessed via the Convict Creek Trail.  This trail is not in good shape, with many portions washed out in 2012.  The Mt. Laurel trail is suggested as an alternate until trail repairs/rebuild can be completed. 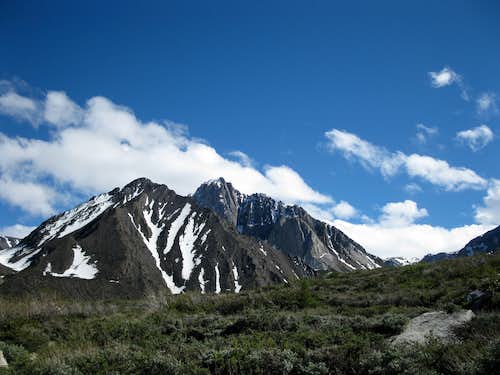 Morrison (behind) from hiker's parking area. 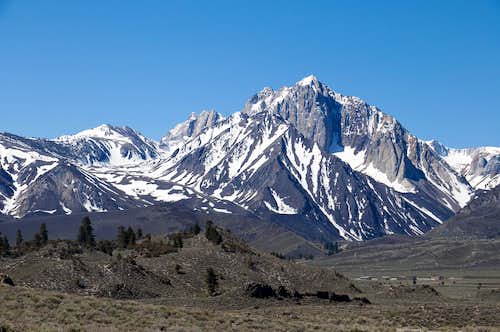 You can also access the approach to the East Slope route via the the Tobacco Flats 4x4 road.  Go west on Morrison Road off US395.  Head up a 1/2 mile or so to the cemetery, turn left at the obvious dirt road just before the gated area of the cemetery and follow it for approximately 4-5 miles through some shepherd camps up to Morrison Creek at the base of Mono Jim Peak ("Little Morrison").  Park and follow the obvious deer trails that meander along the creek up to the East Slope route past "Old Man's Bowl".  Mt. Aggie will be to your left.  You will find a series of two to three small but very secluded and pretty lakes.  This approach can also be used to access the base of "White Fang".  This road is only accessible during spring/summer/fall and when snow free.

There are no fees for overnight parking at Convict Lake, and a Wilderness Permit is only needed if staying overnight in the John Muir Wilderness that surrounds Mt. Morrison. 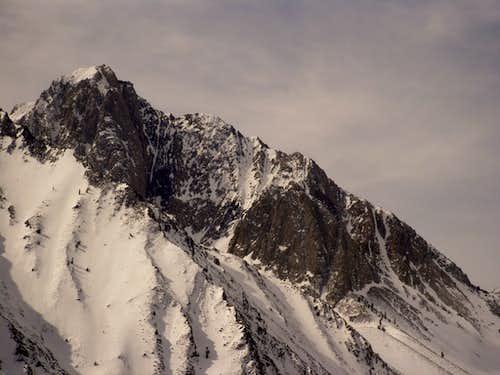 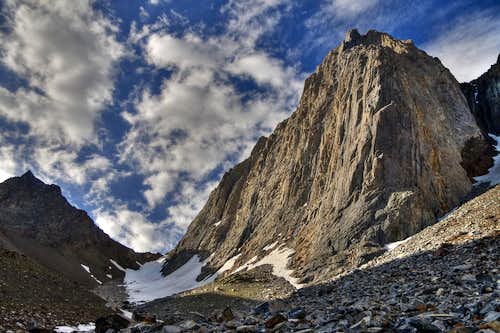 Climbing can be done any time of year, but typically in April-Oct when the peak is mostly free of snow. However, due to the loose nature of the rock on Morrison snow can be a valuable asset on certain routes.  The "Death Couloir" is a route that some may find appealing, though ideal conditions on this route are rare.  If this route suites your fancy, ensure a very early start (2-3 AM with headlamp) to ensure you are above the potential and obvious rockfall and snow chute (located 2/3rds of the way up on the left) prior to its direct sunlight exposure at ~7 AM.  This Couloir can be done from its base to the Summit in 4-6 hours.  Recommend that you either descend via the East Slope onto the NE Ridge and return to main bowl or via the West Ridge back to Convict. 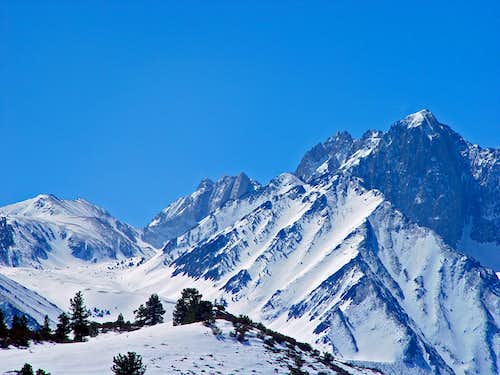 Example ski terrain and conditions for Mt. Morrison (back right) and Mono Jim. Visible are the "Hippie Chutes" (middle left) and the gullies on Mono Jim (middle/lower right).

Due to year-round operation of the Convict Lake Resort the road to Convict Lake is plowed during the winter.  The area is quite popular with backcountry skiers and snowboarders given the road access and proximity to Mammoth Lakes.  Optimal skiing conditions are typically found mid-winter and into the Spring.  The lone exception being the North Couloir on Red Slate, which is typically approached from Convict Lake and the Convict Creek drainage.

Lots of skiing options exist on the lower flanks (along the East Slope route) including NE-facing gullies on Mono Jim ("Little Morrison"), "Old Man's Bowl" between Mono Jim and the north summit of Morrison, the Morrison Col, and the "Hippie Chutes" (or "Hand Gullies") on the lower aspects of Mt Aggie (Moynier, Mingori and Greenberg).  Descents from both the North and South summits of Mt. Morrison are possible when conditions allow, the reader is directed to Mingori and Greenberg for greater detail as these routes are fairly committing.  Possible descent routes from the South summit include the East Bowl, West Face, and North Face, and from the higher North summit the East Bowl.  It's also worth noting that Moynier indicates the Death Couloir has seen at least one ski descent (one group rumored to be Christian Pondella et al.).

Approach to east slope and "Old Man's Bowl" (right). Patches of White Bark's and Juniper's for possible shade are visible. 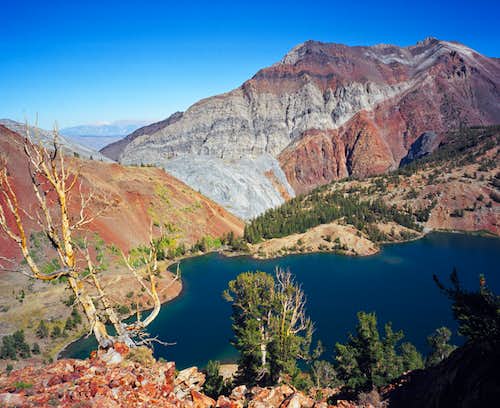 Morrison viewed from the west above Lake Genevieve..

Camping is allowed most places in the John Muir Wilderness.  At least half the approach to Mt. Morrison from Convict Lake is outside the Wilderness and part of the Inyo National Forest (unless you are accessing the western aspects), and there are no permits needed if camping in the NF.  However, the area on the east side of Mt. Morrison (the usual approach) can be dry and hot.  Some shade can be found above "Old Man's Bowl" at the base of East Ridge Route in some clusters of small White Bark and Juniper's.  Water can found during "Wet" seasons in the flowing creek which feeds the series of small lakes and ultimately flows into Convict Lake.

The Mammoth Lakes Visitor Center & Ranger Station can provide the latest information on trail conditions, climbing conditions, and issue free Wilderness permits (depending on quota availability) for overnight stays in the John Muir Wilderness.  When driving into the town of Mammoth Lakes, the ranger station is located on the north (right) side of SR203 about half a mile before the intersection with Old Mammoth Road.

Weather information can be obtained from a variety of sources, including the National Weather Service, Dennis Mattinson, Mountain-Forecast, and Sierra Web.  Information on snow conditions in the region can often be obtained from the Eastern Sierra Avalanche Center, and real-time snow sensor data is available from California Data Exchange Center. 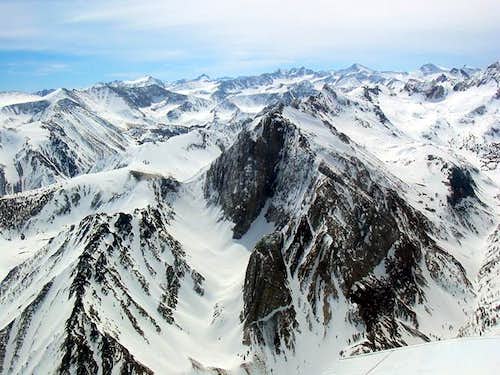 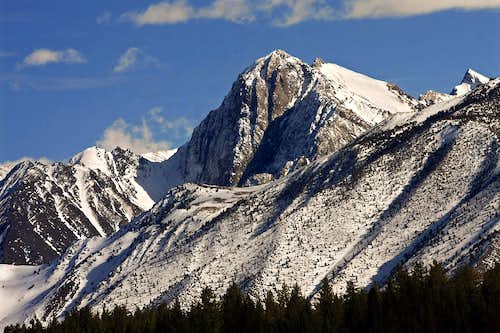 Mt. Morrison is named for Robert Morrison, a posse member killed while pursuing escaped criminals near Convict Lake in 1871 (Place Names of the High Sierra).

On September 17, 1871, twenty-nine convicts escaped from prison in Carson City, Nevada.  Six inmates headed south towards the Owens Valley, and murdered a postal rider from Aurora along their travels.  Posses from Aurora and Benton caught up with the group of convicts near 'Monte Diable Creek' -- now Convict Creek.  Robert Morrison, a Benton merchant and leader of the posse, was killed in the encounter.  The convicts escaped, but three were captured a few days later. Two of the three were lynched while being returned to Carson City. (Chalfant, The Story of Inyo, pp. 214-220.)" 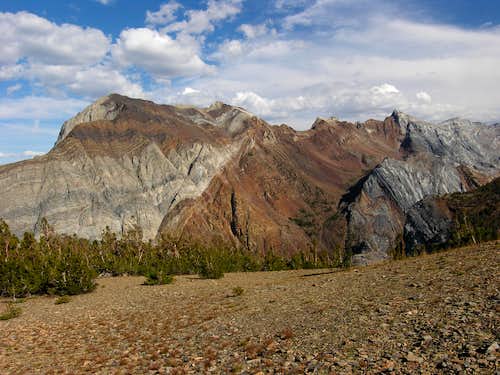 Morrison and White Fang from shoulder of Mt. Laurel. 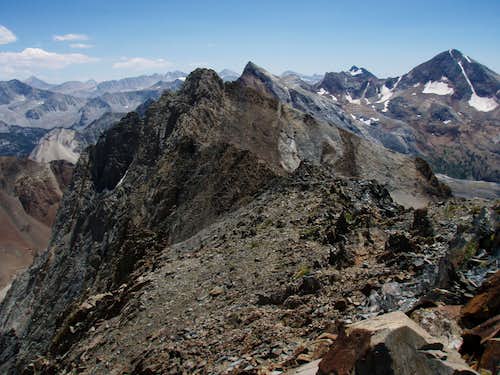 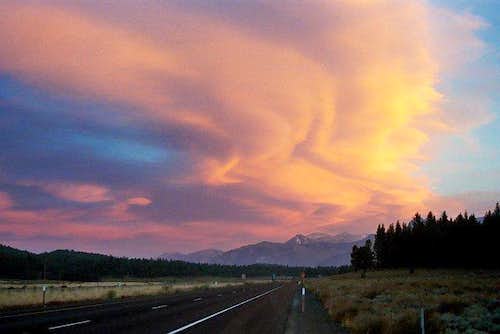 Morrison is the prominent triangular peak in the center. viewed from US395.

The Tobacco Flat Road will get you to around 8,450' and save you 2 to 3 miles of hiking and 900' gain up that hill from Convict Lake. The road was in good condition and easy to drive with a Toyota Tacoma with 4WD on 10/6/12. There are a lot of dirt roads in that area; so mapping out the road and uploading some waypoints to a GPS are a good idea if you don't know that area well.