In the Wild Heart of Glacier 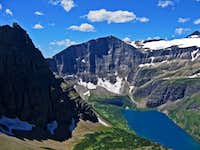 By Saintgrizzly
This page, which I originally submitted in 2008, was accidentally deleted but has been restored.  However, some climber's log entries were permanently lost.  If you had signed the log, please re-sign it.  Also, pictures that had been attached were detached during the restoration process, so please reattach any pictures you had added here.

Ahern Peak is not a difficult mountain to climb, but it serves up the kinds of views one would expect to have to work much harder for. Located deep in Glacier National Park’s backcountry and on the great Continental Divide, America’s wilderness spine, the peak is surrounded by some of the park’s most spectacular mountains, and several of the park’s remaining (and shrinking) glaciers are visible from its summit. Almost 4000’ below, Helen Lake, fed by Ahern Glacier, glistens like the jewel it is. The hike up the peak’s southeastern ridge from Ahern Pass is tiring, but the scenery is unforgettable.

Ahern Peak is out of reach as a day trip for most climbers. The easiest day route is from the Loop on Going-to-the-Sun Road, but that route entails around 5000’ of elevation gain and 20-21 miles RT. The shortest route, from Many Glacier Valley via Iceberg Notch, is only about 16 miles RT but has about 6400’ of total elevation gain, and the climb up to Iceberg Notch can be challenging and/or dangerous. Something else to note for those considering the Iceberg Notch approach: the Edwards guide says it is 650’ down from the Notch to Ahern Pass, but that is wrong; Ahern Pass is at 7100’, and Iceberg Notch is at 8400’.

Most people, then, approach Ahern Peak from Granite Park and stay overnight at the backcountry campground or at the chalet there. To reach Granite Park, one must hike almost 8 miles along the Highline Trail from Logan Pass (but the hike is easy, with little significant elevation change) or hike the Loop Trail, a more strenuous trail that gains about 2500’ in elevation over 4 miles.

From Granite Park, it is a 5-mile hike to Ahern Pass north along the Highline Trail. The spur to the pass is at 4.5 miles, where the trail makes a pronounced bend around a deep drainage. The total elevation gain to the pass is about 700’ when you factor in some drops in the trail.

Do not take this hike lightly, though. In late summer, the trail will be mostly or entirely snow-free in most years, but earlier in the summer, there likely will be several snowbanks blocking the trail. When I covered this route in early July 2008, the trail was more than 50% snow-covered, and I needed my ice axe for safe passage in the early morning. Furthermore, about 1-1.5 miles from Ahern Pass, there was a wide, steep snowbank that was difficult and dangerous to cross, especially since I had to descend it in order to regain the trail. I had to climb along the upper edge of the snow, using cliff edges for additional support, until I reached a section where the angle was more moderate. I know that snowbank had already turned back several hikers that summer, and I believe I was the first to cross it that summer.

According to the Edwards guide, that snowbank is present for most of the summer in most years, though it likely will be smaller and easier in drier years or later in the summer.

From the pass, where there is a nice view of Helen Lake, it is a simple but strenuous hike up Ahern Peak’s southeastern ridge for approximately one mile, gaining about 1650’ in elevation. It is possible, once a few hundred feet up, to follow a good game trail all the way to the summit, and along the way there will be exceptional views. The highlights are probably the occasional notches that frame Lake Helen far below and reveal the sheer cliffs of Ahern Peak’s eastern face. Staying on or near the ridgeline will increase the difficulty from Class 2 to easy Class 3, but the staggering views are more frequent that way. Just watch your step; most of the time, it’s literally 2000 or more feet straight down before you’ll hit something.

The summit views are amazing. This page's gallery includes shots of some of them; a few are featured at the end of this page.
You can find additional information about this peak and others in the vicinity through Volume 3 of Blake Passmore's Climb Glacier National Park series. 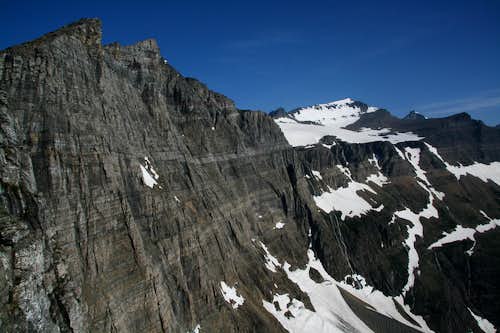 Just a hike to the summit, but a long way down if you slip...

There is an alternate approach to Granite Park using the Highline Trail, and it is useful if you want to shave some distance or if the parking lot is full. The route is described in detail on pgs. 277-278 in the Edwards guide. In short: park a little above the Weeping Wall and look for a well-worn trail leading up the mountainside. Use the trail and streambeds to reach meadows above, where a trail leading to Haystack Butte and the Highline Trail can be found. The general route can be viewed well from the road. This route does incur more elevation gain than following the Highline Trail from Logan Pass does.

The trailhead for Swiftcurrent Pass is at the end of the road leading into Many Glacier Valley, next to the Swiftcurrent Motor Inn.

Camp at Granite Park or stay in the Chalet there, where there are beds and generator-provided electricity (which means cold beer in the evenings). Both places will most likely require reservations. Although first-come, first-served campsites are available, it is unwise to count on getting one. 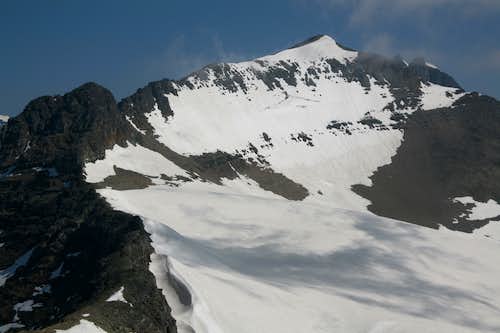 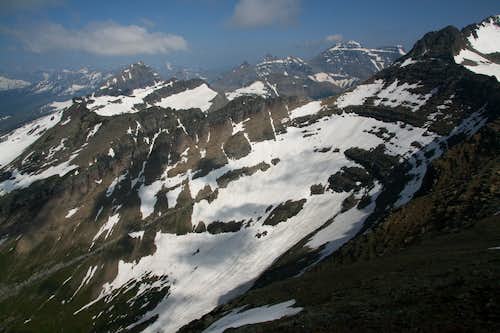 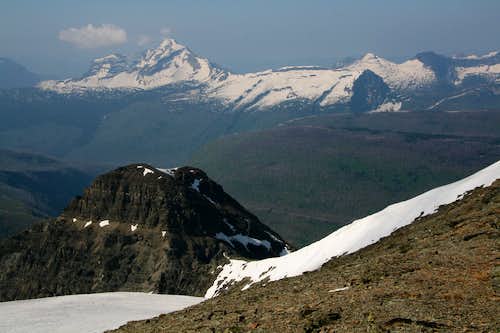 Re: A shout out

Blake, Yes, I did get the book. I'm pretty sure I sent you a PM after I did but might be mistaken. Anyway, it's there on my shelf with the others! I added in a link to your book. How's the snow been this winter? My wife and I are hoping to get out there in late July or August this summer.