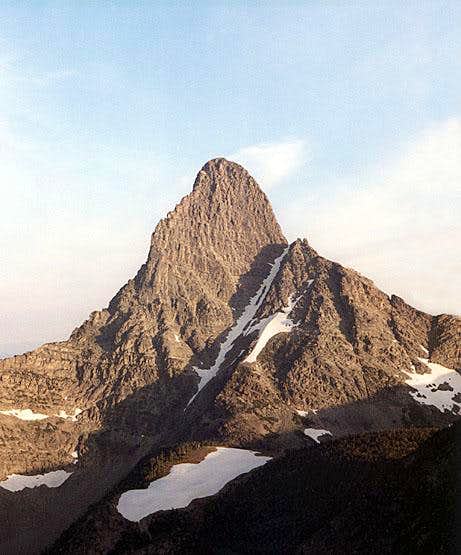 Mount Saint Nicholas from the southeast. Photo by Fred Spicker.

Mount Saint Nicholas is a spectacular horn located in the remote southwest part of Glacier National Park. Its shape and isolated position cause it to catch a climber's eye when viewed from any direction. The difficult approach and technical nature of even the easiest route make most agree that "St. Nick" is the most difficult major summit in the Park. The rock on Mount Saint Nicholas is really quite good by Glacier Park standards and some very difficult rock climbing routes have been completed on the peak. Conrad Wellen is thought to have made the first ascent in 1926. The shadow of doubt here is that his register book was discovered in 1966 under a rock in the Great Notch rather than on the summit. The second recorded ascent was made in 1933 by Robert T. Young and Robert T. Young Jr. The first winter ascent was made on December 28, 1985 by Tom and Trenton Cladouhos. Unfortunately, the record of climbs is incomplete. The guidebook lists just 26 known ascents from 1926 through 1989. NPS Mount Saint Nicholas page: Mount Saint Nicholas 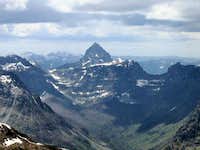 Approaches to Mount Saint Nicholas start from along US Highway 2 on the southwest side of the Park. (US Highway 2 goes around the south end of the Park between West Glacier and East Glacier.) A fairly significant problem is the Middle Fork of the Flathead River. The closest "dry" route starts at the Walton Ranger Station which is on the east side of the river about where Highway 2 crosses from the east to west side. Many parties chose to save some trail mileage by fording or boating across the river near the mouth of Coal, Muir, or Park Creek depending on which approach is planned from there. 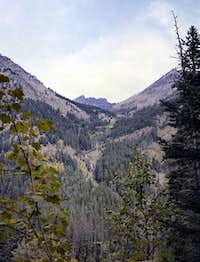 Two main approaches are used for routes on the west, south and east side of the peak. The "Park Creek / Salvage Mountain" approach is described in detail in the climbing guide. It goes up the Park Creek Trail then north cross country to a saddle area with good campsites between Salvage Mountain and Church Butte. From here, a high traverse takes one to the mountain. The distance to the mountain is about 18 miles, with about 12 miles by trail. A shorter, but apparently brushier route is up Muir Creek to "No Name" Lake (sometimes called "Griz Bait Lake" by local climbers) at the base of the mountain on the east side. Muir Creek can be reached by trail from the Walton Ranger Station. Some parties ford the river near the mouth of Muir Creek and bushwhack all the way up.

The most logical approach for the Northwest Couloir Route is up the Coal Creek Trail - a long walk from anywhere unless the river is crossed near the mouth of Coal Creek. Note: A 2005 article in the JOURNAL OF THE GLACIER MOUNTAINEERING SOCIETY, No. 36, states regarding the Coal Creek Trail: "Beyond a few miles in, the unmaintained trail became an obstacle course of large deadfall and charred debris, and then was obliterated altogether -- a result of the 2003 fire." Study the maps and literature and decide how you feel about fording the river vs. an extra 4 to 6 miles of hiking. Park Map - scroll to the bottom and you will find St. Nick, etc.: Glacier National Park Map

Views from the Highway

Current Entrance Fees</a Registration for day climbs in Glacier National Park is recommended, but not mandatory. Outdoor Activity Page Includes links to boating, bicycling, fishing, etc. and the regulations applying to each. A backcountry camping permit (see CAMPING) is required for overnight stays. Rules change, check with the Park Service.

GUIDEBOOK: A CLIMBER'S GUIDE TO GLACIER NATIONAL PARK; J. Gordon Edwards SPECIAL CONSIDERATIONS: Because of the nature of the rock, there are special considerations regarding climbing in Glacier National Park, and grading systems unique to the Park have been developed. Please see this Fact Sheet for further details: GNP Rock & Grading Systems The climbing guide describes just two routes on Mount Saint Nicholas, the Northeast Ridge and the Northwest Couloir. The South Ridge, Southwest Face probably some variations of all these routes have also been climbed. See Miscellaneous Info section for a brief description of the Glacier Park rock and grading system. 1) Northeast Ridge, Edwards Glacier Park class 5 & 6 (YDS 5.6, A0 (in my opinion)), GMS V(5)LL The Northeast Ridge is the most climbed and probably the easiest route. It is described in detail by Edwards. Basically, one attains the "Great Notch" between Mount Saint Nicholas and the subsidiary peak to its east via steep slopes on the south side. From there, one climbs more or less directly up the NE ridge. The first move out of the notch onto the ridge is overhanging and awkward. Most people will use a shoulder stand to overcome this obstacle. Earlier in the season, snow may make this move a bit easier. Climbing on the Northeast Ridge:

2) Northwest Couloir, Glacier Park class 5 This route is described in detail by Edwards and referred to as a "difficult and hazardous route". It ascends a series of steep to overhanging chimneys low on the route then up the couloir and cliffs just to the east of it. The exact difficulty of the rock climbing is not indicated in the guide. The first ascent was made August 18, 1966 by Reverends Hugh Black & John Ward. 3) South Ridge, YDS 5.8+ (5.9?) The South Ridge Route ascends more or less directly up the ridge crest via steep steps and dihedrals. This route was attempted in 1952 by Klindt Vielbig and Dick Parker who abandoned it when they "ran out of pitons". The first ascent was made in August of 1992 by Nathan Sande and Scott Sederstrom. Sande published and article about the climb along with a topo in the Journal of the Glacier Mountaineering Society, No. 25, 1994. ( Glacier Mountaineering Society ) 4) Southwest Face, YDS 5.9 The first ascent was made by Kenny Kasselder and Ted Steiner in 1985 and repeated by them in 1986. The route is described as the "direct" southwest face when referred to by Edwards. A short article was published by Ted Steiner in the Journal of the Glacier Mountaineering Society, No. 20, 1989. Apparently some details were published in the Hungry Horse News, June 11, 1986 also. ( Glacier Mountaineering Society ) 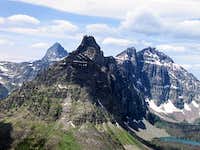 July, August and possibly into September depending on the snow. Later in the season will be better if you plan to ford the river.

A backcountry camping permit is required. There are no established campgrounds at Salvage Mountain or "No Name" Lake. Backcountry Camping Guide 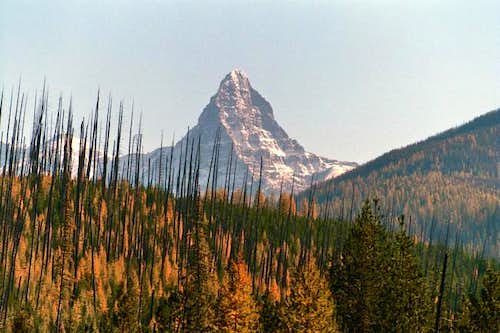