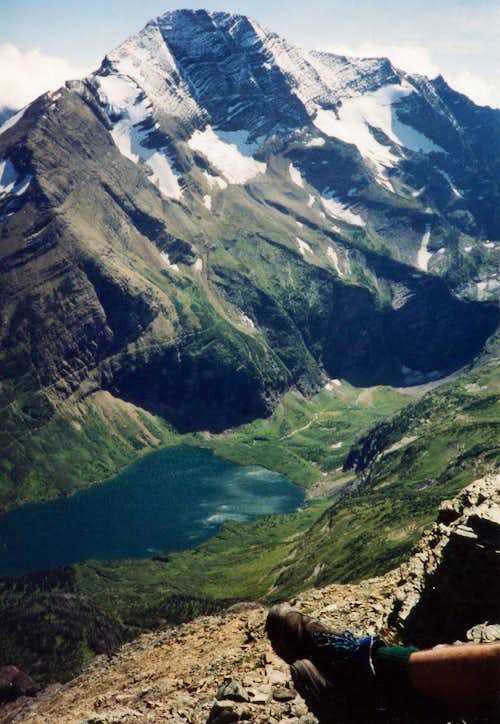 At 10,052’, Mount Jackson is one of only six peaks in Glacier National Park that are over 10,000’ in elevation. It is also one of the easiest of these tallest peaks to climb. For this reason as well as its location and resultant views you will enjoy from the summit, it is a highly desirable destination. The NE Ridge route can be climbed with nothing worse than Class 3 pitches if the proper route is followed once the winter snows have melted. The distance to the summit is about 10 miles…7 ½ of which are on human trails and the elevation gained is about 5,000’. To the south lies Blackfoot Mountain and glacier as well as Harrison glacier. Looking north there are a large number of familiar peaks such as Reynolds, Going to the Sun, Sieyh, Canon, and Clements. To the east you can see Mt Stimson and the less often visited peaks like Almost a Dog and Mt Logan. There are several beautiful lakes to the west of the summit.

Some additional historical information on Mount Jackson has been provided by flatheadnative as follows:

This peak was officially named “Mount Jackson” in 1891 by George Bird Grinnell. He named it in honor of William Jackson, who among other things was a scout for the U. S. Army during the Battle of the Little Bighorn and also the grandson of mid-nineteenth century Glacier National Park explorer Hugh Monroe. Jackson also served with the Royal Mounted Canadian Police, a.k.a. the Mounties, during the Riel Rebellion.

The Blackfeet named Jackson “Sixikaikoan” which means Blackfeet Man. Apparently “Sixikaikoan” was also considered as the name for this peak but in 1940, the Geographic Board stated that the name was too difficult to pronounce. “Sixikaikoan” would have fit nicely with the other peaks with Native American names in this area including Mount Siyeh, Otokomi Mountain and Mahtotopa Mountain.

According to Holterman in Place Names of Glacier National Park, it was in this area that Grinnell used the term “Crown of the Continent” and he may have been referring to Mount Jackson. Interestingly, Mount Jackson is the only 10,000’ peak in Glacier National Park that sits on the Continental Divide so Grinnell would have been correct in assigning the designation to this peak.

There is no official record of who first climbed Mount Jackson. Wikipedia notes that “Mount Jackson was climbed by Frank B. Wynn and his son James Wynn in August, 1912. David Walters has a copy of the journal written by James Wynn describing the 1912 climb” Mount Jackson is part of the Lewis and Clark Range which follows the Continental Divide from North to South in Glacier National Park.

Glacier National Park is located in the northwestern Montana and shares a common border with Waterton National Park of Canada. The nearest airport is Kalispell. Amtrac stations are in Whitefish, W Glacier and E Glacier. Depending on your travel plans, it may be worthwhile to fly to Spokane, WA and pick up a rental vehicle. Some rentals there may be more user-friendly on multiple state use and mileage allowances as well as price. Amtrak Rail service is available at the depots in Whitefish, West Glacier and East Glacier.

Mt Jackson is located in the Saint Mary valley area of the park which lies east of Logan Pass. You can access the Going to the Sun Road at the park entrances at West Glacier or at St Mary and from either location you head toward the opposite end of the road until reaching the Jackson Glacier Overlook which is about 5 miles east of Logan Pass on the south side of the road.

Leave the Going to the Sun Road at the Jackson Glacier Overlook. From the parking area beside the road, you start downhill on the trail that leads to Gunsight Lake and continue to the lake about six miles. 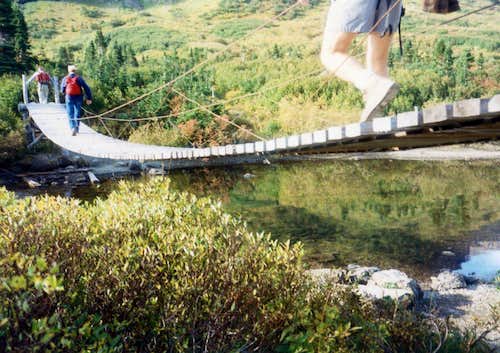 At the foot of the lake you will cross a footbridge and follow a hikers path cutting off to the left from the main trail (which goes to Gunsight Pass) hiking east around the northern end of Mt Jackson which you will have been enjoying taking pictures of as you approached the lake.

After following this trail for about a mile and gaining about 600’ you will reach some open meadows. 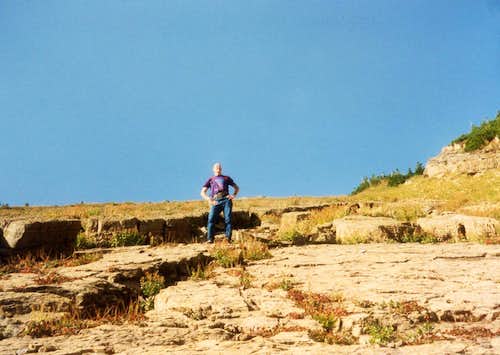 Meadows where you leave trail to climb to ridge

Look for a good route up to your right to attain the long ridge which will take you all the way to the summit. 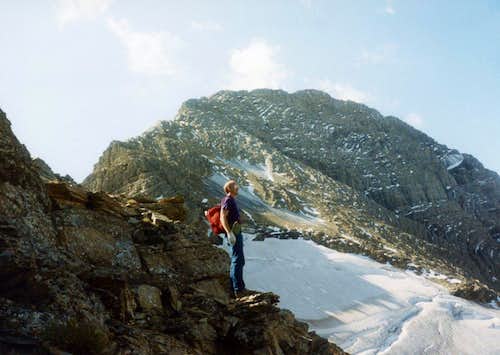 Nearing the summit the ridge suddenly steepens with a few class 3 climbing moves. 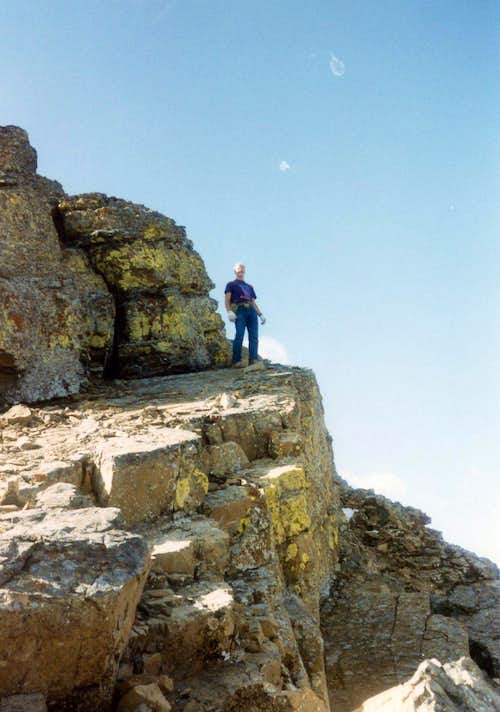 It is best to work to the west where more difficult cliffs are encountered. Ice axes may be needed if you are climbing too early in the season.

An alternate to the main route is to follow the main trail toward Gunsight Pass for about 2 miles to the third switchback around 6,400’ elevation and scramble up a basin to the ridgetop and thence on to the summit. My preference is to use this route for the descent.

Registration for day climbs in Glacier National Park is recommended, but not mandatory. Registration for climbing Mount Jackson can be done at the Logan Pass Visitor’s Center.

There are many camping sites available at Glacier Park; backcountry, as well as car camping. Due to the large number of grizzly and even larger number of black bears who inhabit the area, there are strict guidelines for storage of food. Most of the backcountry campgrounds have facilities for hanging your food from cables or bear proof poles, but you need adequate lines to hoist your packs, etc 15 or 20 feet off the ground. If you are seeking an “undesignated area” camping permit, the rangers may require you to use a bear barrel to protect your food. When we backpacked in to Buffalo Woman Lake, they loaned us a bear barrel since they did not think we could find adequate tree limbs for hanging our food, etc. Hanging your packs is a good idea, since I have seen damaged packs from chewing by rodents. The GNP rangers require you to view an informational video annually before you can purchase your first backcountry permit.

Mea culpa! For some reason that is a default lat/long that shows up on all my pages. I wish there was nothing there so I would have to put something in and might prevent such a mistake. What is your source? I tried to use the following... http://www.mountainzone.com/mountains/detail.asp?fid=4444756 which may not be reliable if your information is the correct data. Do you also have a more accurate altitude source? I appreciate your input.

Third gremlin from the left! Might be a new form of dyslexia

It might be a good idea to correct that elevation number in the first paragraph of the text as well.