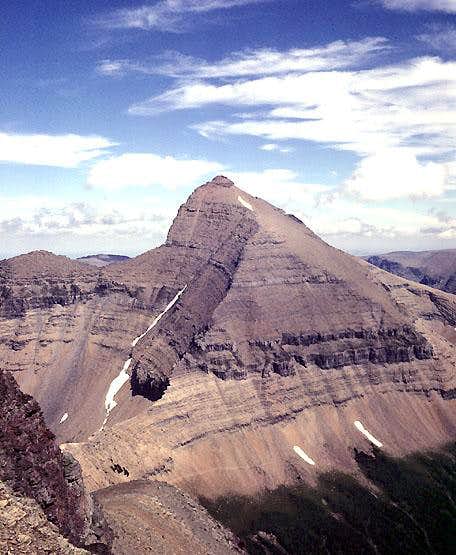 Mount Siyeh from the southwest.

Mount Siyeh is located about four miles northeast of Logan Pass in Glacier National Park. It is the fifth highest peak in the Park, one of just six peaks in the park over ten thousand feet in elevation. The peak has a rather unimpressive hump shape viewed from the south, but has a much nicer profile from the west and east. The north face is one of the highest rock faces in the Lower 48, and to the best of my knowledge, has been climbed only two times.

The mountain was named by G. B. Grinnell for a Blackfeet Indian, "Sai-yeh," who was described as being so recklessly brave that after a time none of his fellow tribal members would go with him on raids against the enemy. In Blackfeet "Sai-yeh" means Crazy Dog, or Mad Wolf.

Current Road Status
The two most common routes on Mount Siyeh (South Slope & Piegan Pass) are most easily approached via the Piegan Pass Trail starting at Siyeh Bend about 3 miles east of Logan Pass on the Going to the Sun Road.

Piegan Pass can also be reached from Many Glacier, but this adds 4 miles (one way) to the hike.

The West Couloir is best approached via the Piegan Pass Trail from Many Glacier.

Mount Wynn is climbed from the Cracker Lake Trail starting at Many Glacier. 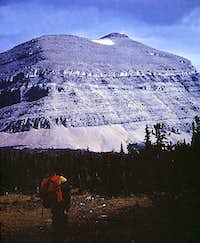 South Slope from below.

South Slope : Class 2 and 3 with care in route finding. There is the possibility of a Class 4 pitch through the diorite sill depending on exactly where it is climbed. About 4,200 feet of vertical gain from Siyeh Bend over five miles about half of which is on trail.

From just east of Piegan Pass, ascend a goat trail toward the saddle east of Cataract Mountain. At the cliff barrier on the ridge, traverse southeast to a class 3 couloir and climb it back to the ridge top which is then followed without difficulty to the summit.

West Couloir : Not recommended in ascent, but apparently a great 1,500 foot scree run down when free of snow. It brings one down to the trail on the Many Glacier side of Piegan Pass in the area of Morning Eagle Falls.

Mount Wynn (traverse) : A 5 to 5.5 mile high ridge traverse from the summit of Mount Wynn to Mount Siyeh. Class 2 and 3 including the climb of Mount Wynn. 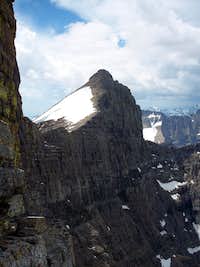 North Face : An extremely difficult climb, rated Grade V or VI 5.9, A2. This is probably the most difficult climb in the Park. It was first climbed 13, 14, & 15 September 1979 by Jim Kanzler and Terry Kennedy on their fourth attempt. They reported 25 or 26 hours of actual climbing with 25 belayed pitches plus some 1,000 feet done third class.

The face finally got a second ascent 14 & 15 August 2005 by Ben Smith and Justin Woods. They followed roughly the same line as the first ascent party free climbing the entire route which they rated 5.10+ R with much loose rock and poor protection. 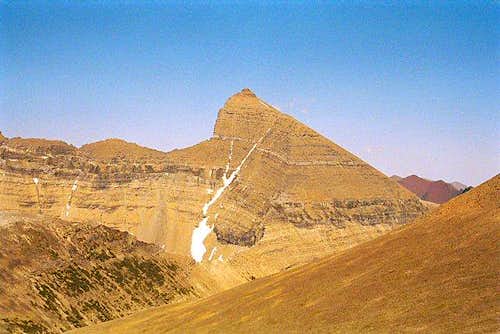