The Aiguille de la Tsa is also known as the Matterhorn of Arolla. This pointed summit rises high above the small mountain village of Arolla. From Arolla it is a very impressive mountain that seems to be very hard to climb. The mountain is located between the Arolla valley and the glacier du Mont Miné. From the summit you'll have a beautiful view towards the Dent Blanche on one side and the Pigne d'Arolla on the other side. The mountain offers great climbing in average climbing difficulties (UIAA III). There are several possibilities to traverse the mountain, wich gives you a great climb in a beautiful surrounding. You can either start in the Bertol hut or in the Tsa Hut. The valley of Arolla is nice and quite. The stream of tourist didn't overtake this small mountainvillage, wich makes it very nice to stay. The First ascent of the Aiguille de la Tsa: 21 july 1868, Pierre Beytrison & guides. 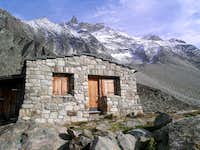 Normal way from the Bertol Hut: From the Bertol over the ladder back to the Col and then in northeast direction on the saddle between point de Bertol and point 3372 m (cable just below the col). On the other side you see already the summit. But first you'll have to cross the dangerous glacier towards the plateau beneath the summit. From here, the climbing starts. The climb to the summit will take 3 to 4 pitches and contain some traverses and chimneys. The descent can be done in 3 rappels to the base of the summit (bolts). The climb takes about 2-3 hours and contains climbing passages of UIAA IV- (AD/ZS). Normal way from the Cab de la Tsa: From the Cab. de la Tsa there are several possibilities to climb the Aiguille de la Tsa. I will describe the traverse of the Pointe Tsalion and the Dent de Tsalion. The Pointe Tsalion is easy to reach under good conditions (with a lot of snow it will be more difficult to find). The traverse to the Dent de Tsalion offers some climbing passages(II), but is not very difficult. After the Dent de Tsalion you'll reach the plateau beneath the summit. (see above for the last part of the climb). It is also possible to climb the West ridge of the Dent de Tsalion and then continue by climbing the Tsa. Probably one of the best climbs in the valley. The climb takes about 4-5 hours (depending on conditions) (AD/ZS). 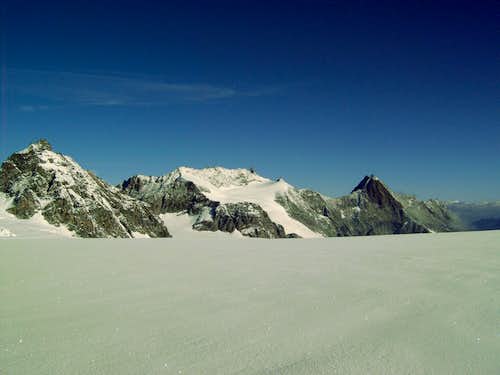 Southeast side of the Aig. de la Tsa