Schneedomspitze is a 4274m high peak in the Monte Rosa Massif. It is better known as  Il naso del Lyskamm or just  ‘’Il Naso’’, which means ‘’the nose’’. Il Naso is a frequently climbed peak in the Monte Rosa Massif on the border of Italy and Switzerland. Many people who make the famous Monte Rosa round tour (and sometimes climb 10 or even more 4000 meter peaks along the way), climb Il Naso as well. Il Naso connects the Quintino Sella Hut with the Mantova and Gnifetti Huts.  In order to make the round tour, often Il Naso is climbed and traversed. Most people climb Il Naso from Quintino Sella Hut and descent towards the Mantova or Gnifetti Hut.

According to the UIAA, Il Naso is a so called ‘minor peak’ in the list of alpine 4000+ meter peaks. However, according to Goedeke and Mclewin Il Naso is listed as a major alpine 4000 meter peak. There has been lots of discussion about Il Naso and the fact that it should or should not be listed in the UIAA-list. Some people say it should be, because it is more qualified as a major peak compared to, for instance, Punta Giordani, a shoulder of the Pyramide Vincent,  who is in the latest list. The other camp says Il Naso is just a subsidiary of Lyskamm and should stay off the list. I’m not going to debate whether it should or shouldn’t, but I think the peak is of such importance that it at least deserves a place here on SP.

The route is graded PD and involves a steep section of snow/ice (40/45°) on the West Face as well as the East face. The steep section on the East Face can be avoided though (through a rock section). When conditions are icy, the route becomes quickly more difficult, I would say at least PD+. 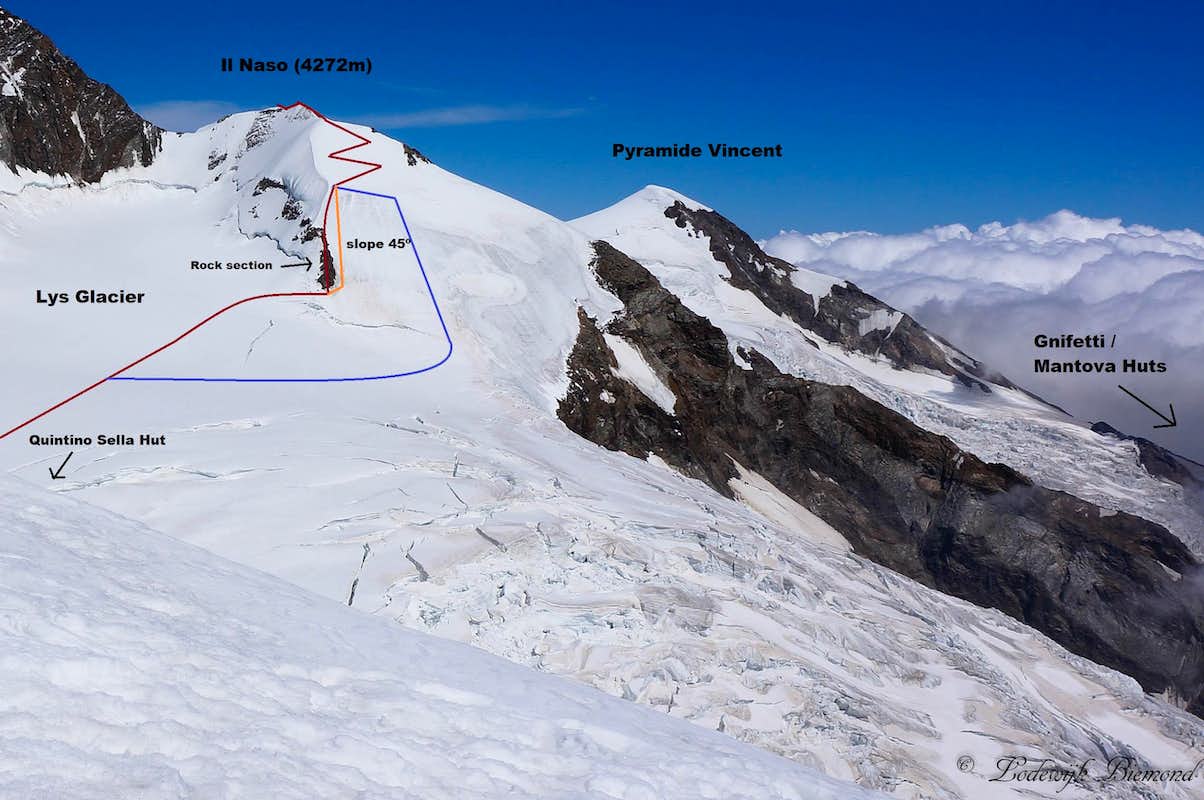 Theroute starts at the Rifugio Quintino Sella. Behind the hut lies the Felik glacier. The route crosses the Felik Glacier towards the north until you reach the Lys Glacier located south of the mighty Lyskamm. You cross the Lys glacier in an eastern direction with Lyskamm’s south face looming above you. Eventually you will reach the base of Il naso del Lyskamm.
At this point the climb starts along the West Face. The slope is about 40 to 45°. Depending on the conditions you can choose to climb along the rock band or climb along the (snow/ice covered) face itself. After climbing this section the route gradually becomes less steep and eventually you will reach the Passo del Naso. From here, the route  goes to the left along a short slope to reach the snowy ridge, and subsequently climbs up to the right on an easy mixed ridge to reach the summit at 4,272 meters.
The path of descent is the same as described above. Another option is to cross Il Naso and go down in the direction of the Gnifetti Refuge. From passo del Naso descent along the snowy east face of Il Naso until you reach the Lys Glacier. Note: When conditions are icy, most people choose to climb down along the rocks just south of the normal, direct route down towards the Lys glacier. Watch out for loose stones here. Taking this rocky section will also lead to the Lys glacier and joins the other route again on the glacier. From here it’s a glacier walk down to the Gnifetti Hut. This part of the route is described in more detail below (route 2). 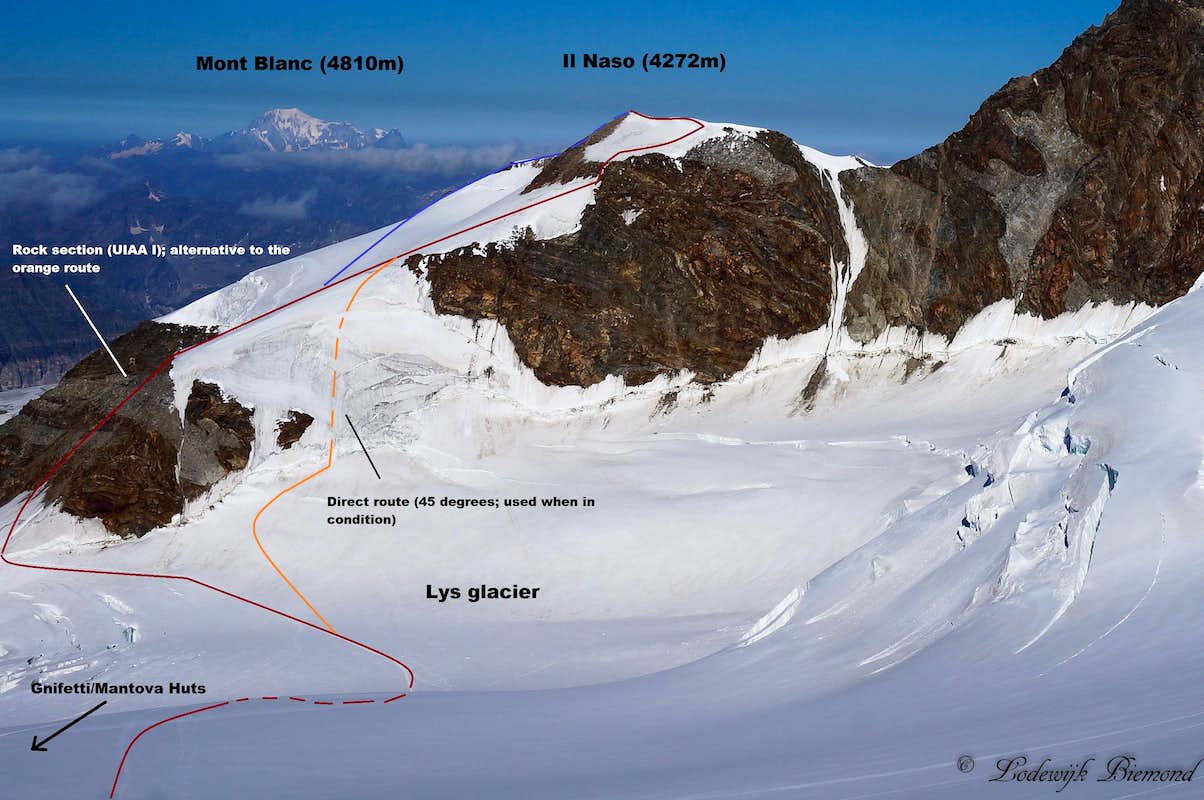 Directly behind the Capanna Gnifetti you will arrive at the immense Lys Glacier. Head towards the north on the glacier. Most times a path is visible along the glacier; this is a result of the popularity of the route. All routes towards the Monte Rosa 4000m peaks go up here. Do watch out for crevasses, the Lys glacier is completely filled with them. Eventually you will pass Pyramide Vincent (visible to the right of you) and reach a junction of trails at about 4000m of altitude. If you take a right you go up Pyramide Vincent, if you go straight ahead, you are heading towards Signalkuppe, Zumsteinspitze and co. For Il Naso you have to go left here (towards the west). The path crosses the Lys glacier in a western direction and goes in the direction of Il Naso, which is visible at any point.

Eventually you will reach the base of Il Naso. From this point there are two options: Go up the east face directly in the direction of the Passo del Naso (4150m). This involves a short section (40/45°) which is mostly frozen. If conditions are not optimal it is possible to avoid this section and to climb up the rock face to the south of it. This rocky section involves some light climbing in the first grade(UIAA I) . You do have to watch out for all the loose debris though, it is very easy to slip. After the rock face you will reach the Passo del Naso at 4150m.From here, the route goes to the left along a short slope to reach the snowy ridge, and subsequently climbs up to the right on an easy mixed ridge to reach the summit at 4,272 meters. It is also possible to go up in a more or less straight line from the ending of the rock section. In this way you are able to traverse the summit ridge and descent towards Passo del Naso.

Descent is the same way back. A more popular option is to cross Il Naso and go down the West face in the direction of the Quintino Sella Hut. See the description of the route above (‘’West Face from Quintino Sella’’) for more details about this route. 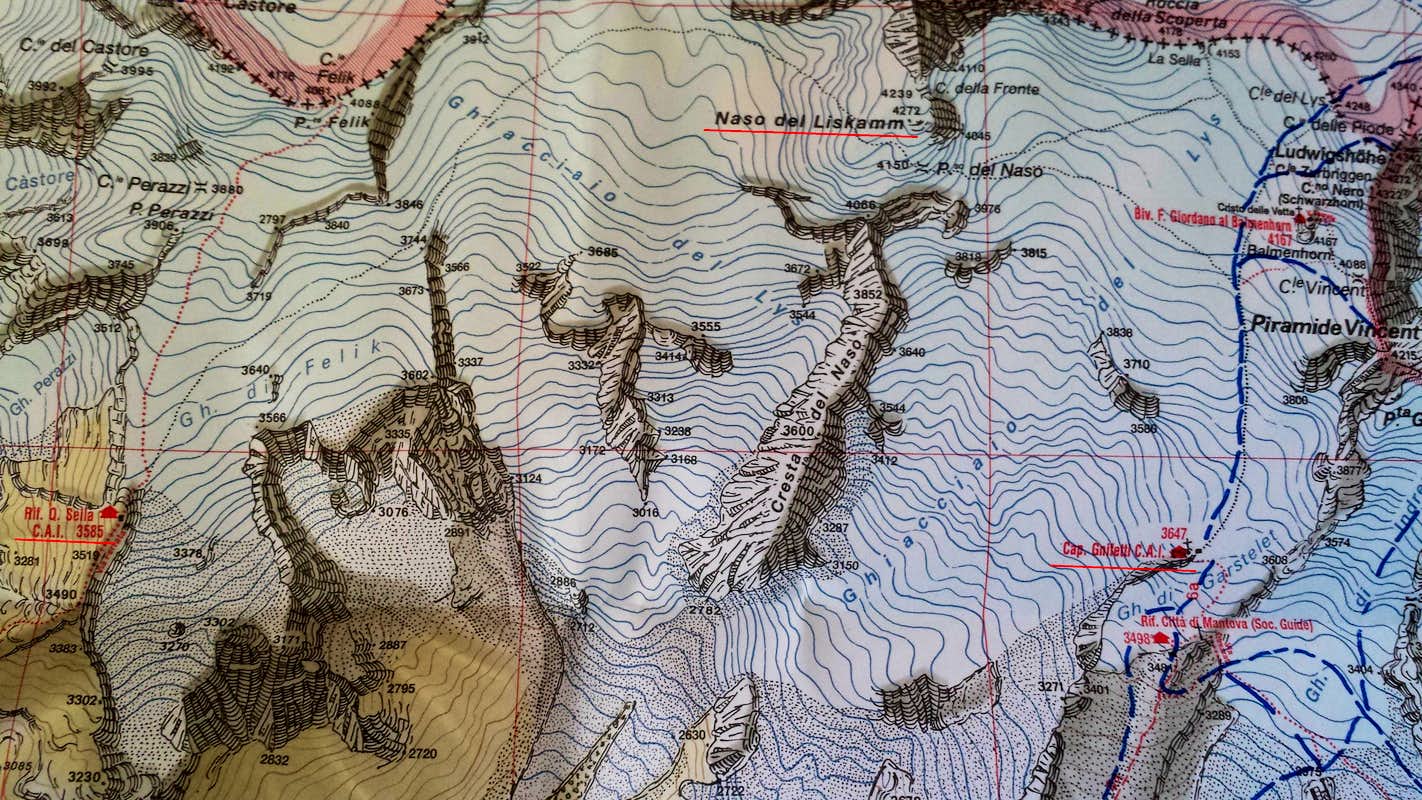 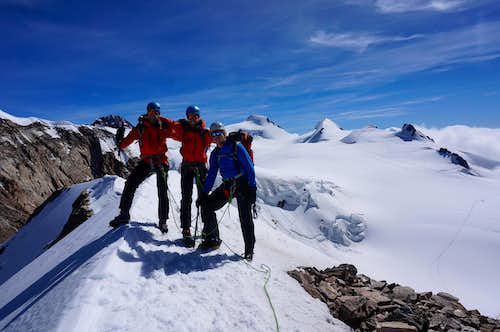 The route to the refuge is via a glacier trail of about 1 hour walking that starts from the new station of the funifor Passo Salati-Indren at 3275m above see level, with a difference in height of 372 m. Indren can be reached with the Monterosaski lift system from Alagna or Gressoney

Starting from Gressoney-La-Trinité, continue for about 4 km to  reach Stafal, where the paved road ends. The lift to Colle Bettafora, at an altitude of 2680m, departs here.  At the ending of the lifts path number 9, indicated by a yellow marker, starts. The first section of the trail, until Colle Bettolina at 3100m, is easy. From the beginning of the season until the end of July this path is usually covered with snow, but due to the amount of  hikers, the path is usually well visible. The last section consists of an open ridge (30-40 minutes), there are fixed ropes present though, making this section relatively asy as well. Total time to reach the refuge is about 3 to 4 hours in total. 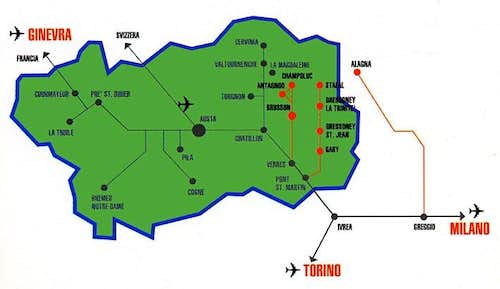 How to get to Alagna:

From Milano: take the motorway A4; at the junction with A26 head in the direction of Gravellona Toce and then take the exit marked Romagnano Ghemme. Follow the main road SS299 to Alagna.

From Torino: take the motorway A4; at the junction with A26 head in the direction Gravellona Toce and then take the exit marked Romagnano Ghemme. Follow the main road SS299 to Alagna.

From Genova: take the motorway A26 towards Genova Gravellona Toce and then take the exit marked Romagnano Ghemme. Follow the main road SS299 to Alagna. 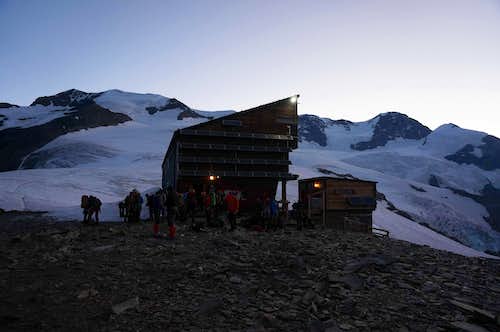 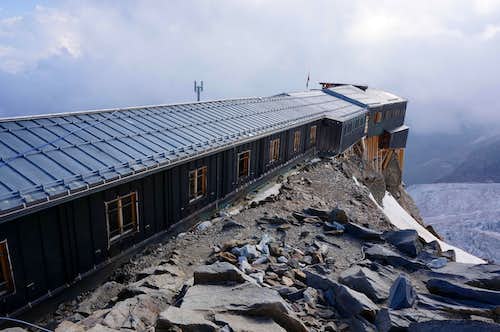