Note: After WW I, Austria lost South Tyrol to Italy. Most geographical features only had a German name, but during the Italianization period they all received an Italian one.

The first time a feature is mentioned in this article, both names are given, German first. For the sake of readability, only one name is used after that.
The Bärenluegspitze / Cima dell'Orso is a relatively minor summit, just southwest of the 70 m higher Dreieckspitze / Triangolo di Riva. Apart from the latter, all nearby summits are lower, and consequently the Bärenluegspitze offers excellent views, in particular of the northern Rieserferner Group and down the Reintal / Valle di Riva. 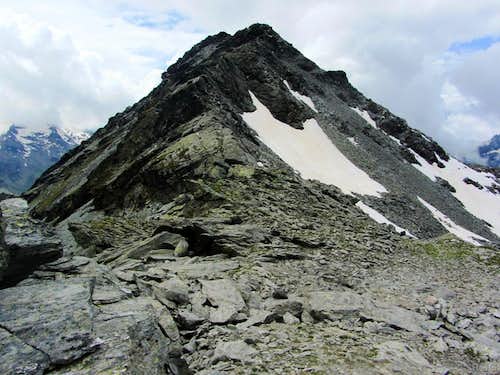 The Bärenluegspitze from the saddle with the Dreieckspitze, looking up the NE ridge
The slopes of the mountain are mostly covered by scree, while the ridges offer somewhat more solid rocks. That makes the ridges more suitable for climbing the mountain, in particular the northwest ridge from the Bärenluegscharte (2848m), the saddle with Sosseneck / Costa del Sass (2950m). The other ridges are a long one to the south and a short one to the northeast. The base of the northeast ridge is the unnamed saddle with the aforementioned Dreieckspitze. The saddle elevation is 2874 m, giving the Bärenluegspitze a prominence of 86 m.

The slopes are steepest right below the summit, especially on the east side. Besides, the scree makes ascending the slopes hard work. Covered with snow, the western and northern slopes are fine for ski descents. Well into the summer, patches of snow can linger on the north side, which can be helpful for a swift descent.


There is no cross on the summit, only a cairn. 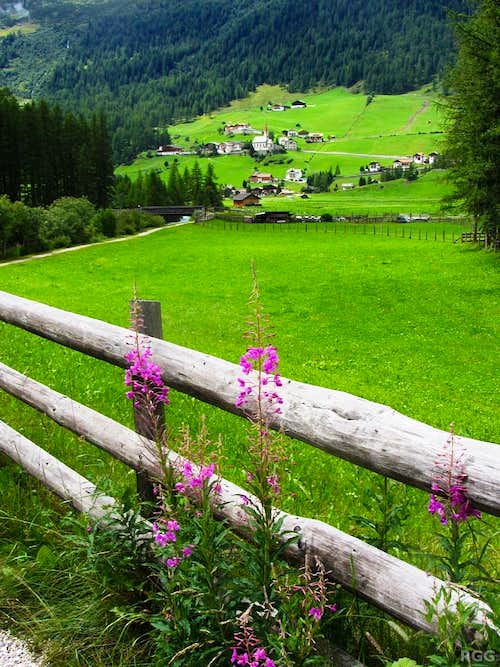 The nearest train station is in Bruneck / Brunico, a small city in the Pustertal / Val Pusteria with a lively and scenic old center. Lots of buses head north to Sand in Taufers / Campo Tures, located at the junction of the Tauferertal / Val di Tures, Ahrntal / Valle Aurina and Reintal. From there, during the day a few buses go to Rein in Taufers / Riva di Tures. For more information, see Südtirol Mobil / Mobilità Alto Adige.

Google Street Map, centered on the Knuttental trailhead. Switch to Satellite View and zoom in for a clear view of the parking area. Click here for a larger map.

From the North
Enter Italy over the Brenner / Brennero Pass. Shortly past Franzensfeste / Fortezza and before Brixen / Bressanone, leave the motorway for the E66 to Bruneck and the Pustertal.

Take the exit Bruneck West and drive into the town. From the center take the SS621 north to Sand in Taufers, and right past the town turn east to Rein in Taufers. For the Knuttental / Valle dei Dossi trailhead, drive through the village to the large parking area at the end of the road.


From the South
From Bozen / Bolzano head north on the Brenner motorway. Shortly past Brixen and before Franzensfeste leave the motorway for the E66 to Bruneck and the Pustertal.


From the East
Drive down the Pustertal along the E66 to Bruneck. Take exit Bruneck Ost.

Open Source route map, centered on the Bärenluegspitze. Rein in Taufers is in at the end of the (yellow) road.               Click here to view a larger map

View from the Dreieckspitze down on Bärenluegspitze (left) and Sosseneck, with the Bärenluegscharte between them.
The NW ridge is seen in profile, the NE ridge head on. Note the snow on the north side of the Bärenluegspitze, and the lack of it on its east side.

The normal route follows the northwest ridge from the Bärenluegscharte. There is no clear trail, but occasionally a cairn shows the way. Still, on the ascent you have the summit in view all the time and can't get lost. It's steep hiking, and using a hand can be helpful occasionally. The ridge ends on a false summit, northeast of the now easy to reach true summit, which is a minute or two away.

An alternative route follows the northeast ridge from the saddle with the Dreieckspitze. It's a steep hiking / scrambling route, barely harder than the northwest ridge, though using a hand is necessary occasionally. I estimate that it is not harder than UIAA grade I.


The south ridge is much longer. I haven't tried to climb or descend it, nor found any references to it. 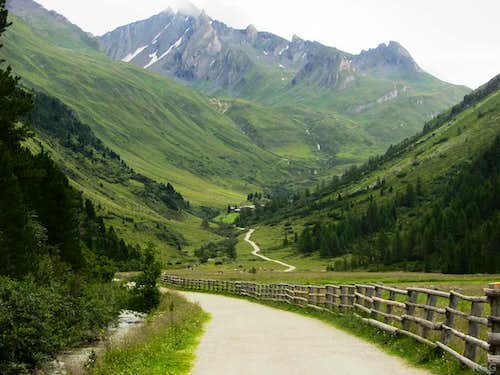 There are several ways to get to the base of the mountain, all much longer than the short final push. The two main approaches can be combined into a circuit, and that gives a good idea of the possibilities. With a decent map, you can make up your own variation.

The nearest trailhead is at around 1700 m, north of Rein in Taufers, at the entrance of the Knuttental. There is a big, free parking lot. For those using public transport, from the bus stop in the center of the village it is about 1.5 km and 120 m elevation gain to the same trailhead. To get there, follow the sign posted and well marked trail no 9 along the Knuttenbach / Rio Dossi, or the (longer) winding road.

From the Knuttental trailhead at around 1700 m, start hiking up the Knuttental (trail 9), heading northeast. It's a fairly straight road, rising gently at first, gaining some 200 m in 3 km. By the side of the road, at 1911 m, lies the Knuttenalm, a fine place to stop for coffee and cake. In fact, it's the only place to get refreshments until the end of the day.

Not long after that, the road turns east, and to overcome the faster rising valley floor the road has more turns. It's not necessary to follow the winding road all the time as there are footpaths bypassing the turns. Eventually the road reaches the Klammlsee / Lago di Gola (2258m). Right before this lake our route leaves the road. 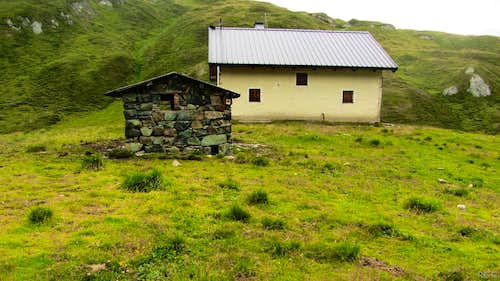 Old customs and border control building at the Klammlsee
Suggestion: from the saddle it is only 156 m to the summit of the Dreieckspitze, which offers great views into Austria.

Dreieckspitz summit view
Head south, keeping the lake on your left and passing an old building just west of the lake (trail 9A). There are plenty of trail markers, and higher up some cairns. Winding up the slopes, the trail is now much steeper than down in the Knuttental. At around 2500 m or so, the terrain levels off. This is the home of the Napfenlacken, a few small and shallow alpine lakes.

Past the lakes it gets steeper again, until another small lake at around 2780 m, wedged in between the Dreieckspitze and Sosseneck. At this point, the Bärenluegspitze finally comes into view. 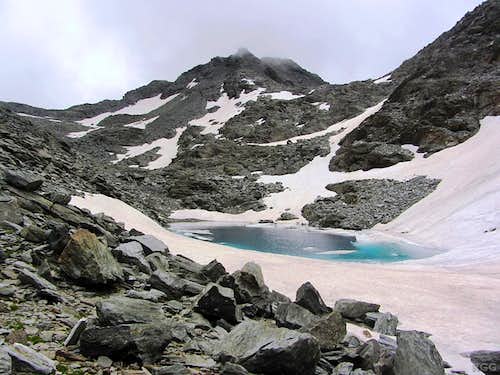 From the saddle, looking up the northeast ridge of the Bärenluegspitze, it appears to have some steep sections, but the steepest parts can easily be circumvented (see photos above, including the one in the Overview). I took just over 20 minutes to cover the 86 m elevation gain and less than 300 m distance. Almost as high as the real one, a false summit blocks the view of the true summit until you are nearly there.

For the descent, head back to the false summit, and from there go down the northwest ridge. The route is vague and mostly unmarked. Just follow the ridge down, which eventually leads to the Bärenluegscharte with its clear trail. When in doubt about the ridge, it's best to stay just a bit west of the ridge proper (put differently: on the descent that's the left side of the ridge). 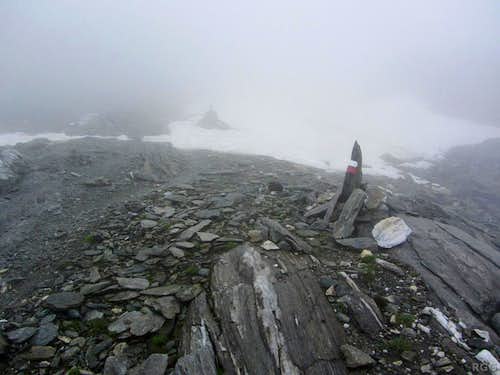 I came down the NW ridge in thick fog. It's still foggy, but I'm back to the relative safety of a marked trail
From the Bärenluegscharte, follow the well marked trail (9A again) to the left (heading west by southwest). At first it descends gently, then it gets steeper before leveling out again. By now grassy slopes have replaced the rocky terrain, and a wide plateau stretches before you, with the scenic Kofler Lakes (2439m). 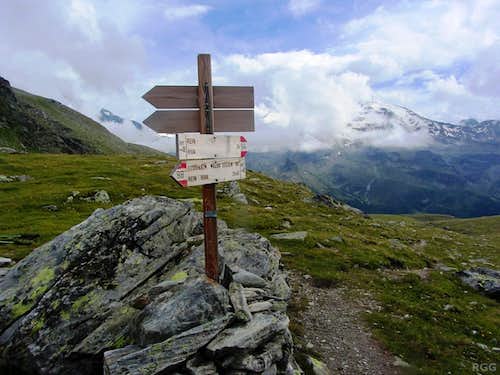 Signpost at the Kofler Lakes
At a signposted junction, stay on trail 9A, keeping the lake on your right.

On the south side of the plateau, the lakes are drained by the Köfler Bach. As the slopes get steeper again, the trail follows this stream, until it reaches the Arthur Hardegen-Weg at the Obere Kofleralm (2192m). Follow this big, clear trail (8A) west, back to the trailhead.

This circuit, including the traverse of the Bärenluegspitze, takes between 6 and 7 hours. The side trip to the Dreieckspitze adds another hour.

The mountain is located in the Rieserferner-Ahrn Natural Park, but no special restrictions apply. Camping is not allowed, high alpine bivvies are. 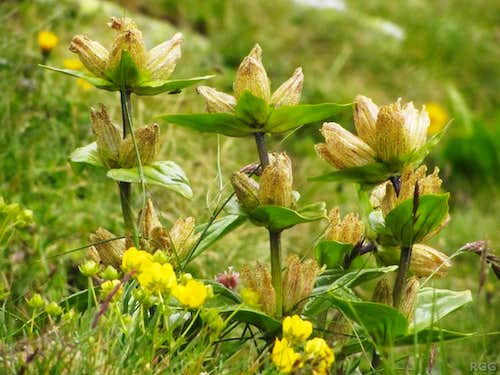 Spotted Gentian (Gentiana punctata) near the Kofler Lakes
When hiking, the best time is from late spring to autumn, ski mountaineering is possible in winter and early spring. When hiking, expect snow at least until early summer. I still encountered some by the end of July.

Bärenluegspitze from the north (it's drizzling, hence the two fuzzy dots)

The area thrives on tourism, and consequently there are lot of accommodation options in Rein as well as in many of the villages lower down. However, there is no campground nearby, nor a conveniently located alpine refuge.

Outside the main seasons (winter for skiing, summer for hiking) it's quiet.

Rieserferner Gruppe (Alpenvereinsführer), Werner Beikircher, 1983, Bergverlag Rother. ISBN 978-3-7633-1227-6. In German and out of print. I looked at this guidebook at the public library in Bruneck. It certainly wouldn't be worth buying a second hand copy for the Bärenluegspitze alone, but, although somewhat outdated, it's still useful when exploring more of the area.

Rein in Taufers
A trip report (in German) 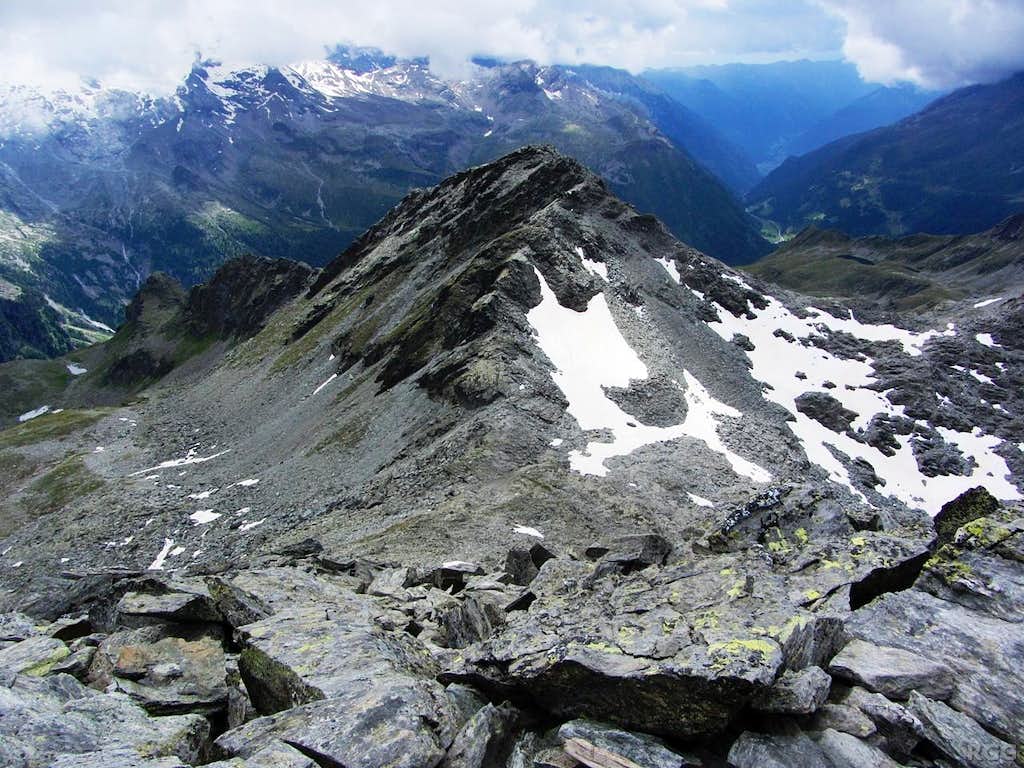