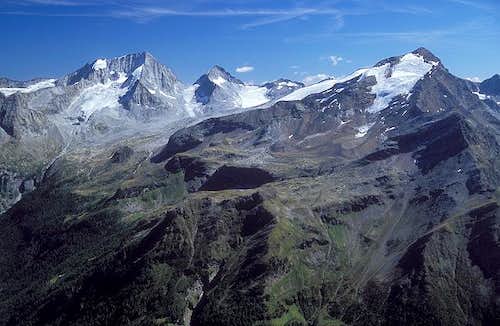 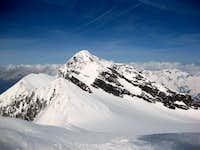 Schneebige Nock is one of the great summits of the Rieserferner group. Of course, it is clear who is the great master here. It's Collalto / Hochgall, but among others it's hard to prioritize. Schneebige Nock / Monte Nevoso is the second highest, elegant, its high ridges meet above some nice glaciers and its NW slopes are rising more than 1800 m above the valley of Rein / Riva di Tures.

The mountain is standing high above Rein / Riva di Tures. Thanks to the two supporting mountain huts it is often ascended. Its long rocky and snowy ridges attract all kinds of mountaineers. Ascents are not just easy, but with some experience and a proper equipment they can be done without bigger problems. The three normal tours offer some possibilities of combinations, the most attractive being the one where we ascend by the N ridge and descend by the E ridge, continuing towards Magerstein / Monte Magro.

As seen on the map, Schneebige Nock / Monte Nevoso is standing a bit north of the main chain of the Rieserferner group, so its stand-alone position guarantees also a great panorama. The possibility of a ski descent is not often mentioned, but when it is, it is said that in good conditions the glacier towards the Hochgallhuette / Rif. Roma could be also done with skis. The ski tour from Schneebige Nock / Monte Nevoso (actually fore-summit) is difficult, but one of the most rewarding in the whole group.

In German speaking world the mountain is also known as Ruthner Horn. The name was given to honor the famous mountain explorer Anton von Ruthner, and it is quoted in some maps and books. But of course the original name has to be preferred.

Mathias Zehring - On the summit 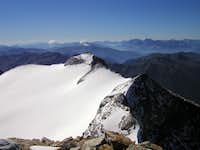 As Schneebige Nock / Monte Nevoso rises a bit off the main crest of Rieserferner group, it offers in days with good visibility a very nice panorama. The first mountain which attracts attention is of course the nearby Hochgall, rising above its glaciers. Nice are also other summits of Rieserferner group, beyond Rain valley the Durreck group, behind it Zillertal Alps and to the right Hohe Tauern and towards the south picturesque Dolomites.

Schneebige Nock / Monte Nevoso is most often ascended from the north, from the village of Rein / Riva di Tures, 1596 m. One, and the most common trailhead starts in Bachertal / Val del Rio, on the parking place at Saege, 1580 m. From there a good, marked path goes up to Hochgallhuette / Rif. Roma.

The other trailhead in Rein valley is more SW of the village, where on the altitude of some 1520 m the marked path crosses the Reinbach and enters the Gelttal. This is the path to Rieserfernerhuette. Mathias Zehring says: 'Gelttal valley is a very scenic high valley. I can recommend this side of the mountain very much.'

The second option to ascend Schneebige Nock / Monte Nevoso is from the south. In Antholz valley we start on the altitude of some 1400 m and follow the marked path towards the NW to Rieserfernerhuette. 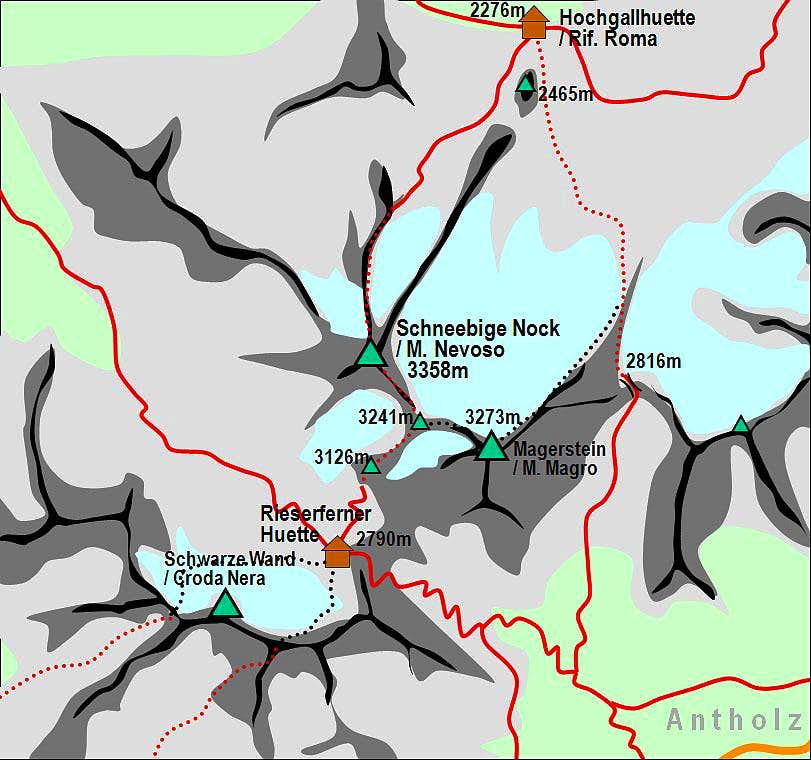 There are three usual routes on Schneebige Nock / Monte Nevoso:

This route is usually done in descent, when we do the crossing of Schneebige Nock / Monte Nevoso. Let's see, how it goes upwards: From Hochgallhuette / Rif. Roma, 2276 m we go by the eastern side of Tristennockl, 2465 m, towards the SE. The marked route goes towards the Antholzer Scharte / Forc. d'Anterselva, 2816 m. But reaching the NE edge of the Western Rieserferner (also called Tristenferner or on the upper part Magersteinferner) we start turning by its edge towards the SW, ascending the summit of Magerstein, 3273 m. From there we go by the WNW ridge over Frauenkoepfl, 3251 m to Fernerkoepfl, 3241 m, where from the left the marked approach from Rieserfernerhuette joins. From there we ascend by the SE ridge the summit of Schneebige Nock / Monte Nevoso. Some 5 h.

From the hut (2791 m) we ascend by the marked path towards the NE. We pass the summit of Gelttal Spitze / Cima Valfredda, 3126 m and climb by the SW ridge of Fernerkoepfl, 3241 m and as described in #2 on Schneebige Nock / Monte Nevoso. 2 h.

No limitations for ascending the summit. It stands in the Natural Park Rieserferner-Ahrn.

The best time for climbing is July-October. The tour can be done also in winter time, but becomes much harder.

also Kasseler Huette (old name), or Rifugio Roma (because the property and the authority responsible of inspection is CAI of Rome), 2276 m. Opened start of March till Mid May and Mid June to Mid October. 70 beds. Tel.: hut: 0474 67 25 50, private: 0474 67 25 21. From Rain a short side valley goes towards SE, taking all water from glaciers of hihgest Rieserferner summits. On a beautiful terrace above the valley a hut stands, offering the best starting point for tours on Hochgall, Schneebige Nock and also Lenkstein and Dreieckspitze. Around the valley also a nice panoramic marked path goes.

(also called Gaensebichljoch Huette), 2791 m. Opened from end of June till start of October. 60 beds. Tel.: hut: 0474 49 21 25, private: 0474 49 22 28. The hut stands on the saddle between Schneebige Nock and Schwarze Wand. It can be reached by marked routes from Raintal and from Antholzer tal. The hut is starting point for ascents on Schneebige Nock and Schwarze Wand. In Antholz / Anterselva valley there is a camping place just below the trailhead for Rieserfernerhuette.